Left or Right: On what End of the Spectrum do We Find the Nazis? 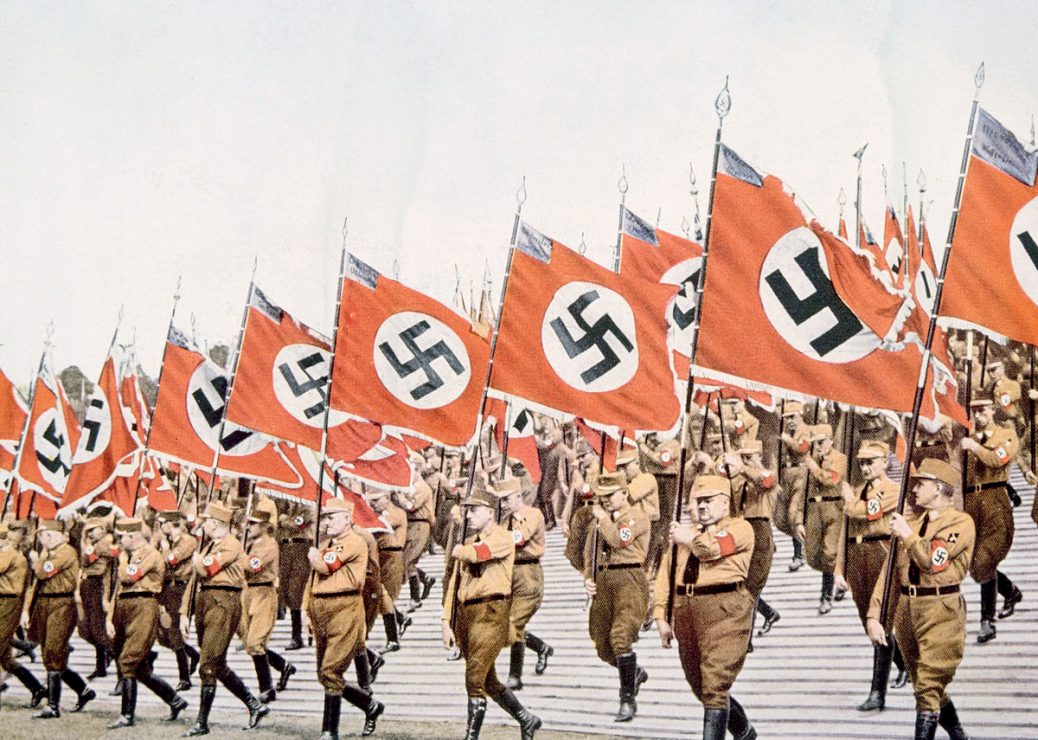 Liberals often refer to Nazis as “extreme right”, and to right-wingers as Nazis. Were the policies of the Nazis really similar to those of modern American conservatives? Or at least, conservative policies taken to the extreme?

Let’s review the agenda of Adolf Hitler. He laid it out in a speech on February 24, 1920, that became known as the “Twenty-Five Points” and became the official platform of the Nazi Party.

For the sake of brevity I’ll summarize each of the 25 points. Feel free to look up the complete text, for example, here.

1, “Union of all Germans in a Great Germany”, and 2, “Treatis of Versailles and St Germain to be abrogated” are pretty specific to Germany’s historical situation at the time, and can’t really be compared to American politics. Likewise poine 3, “colonies for our surplus population”, is not an issue in America today.

4, “Only those who have German blood can be our countrymen, hence no Jew can be a countryman”. Few Americans, left or right, hold a similar position.

5, “Non-citizens must be subject to the law of aliens”. The point was to limit the rights of immigrants. Let’s call that Conservative.

6, “No public office shall be held by anyone who is not a citizen”. Another restriction on immigrants. Let’s call that Conservative also.

7, “The government shall ensure that every citizen shall have the possibility of living decently”. It is the government’s responsibility to provide jobs for all citizens and to provide for those who can’t get jobs. Definitely Liberal.

8, “Any further immmigration of non-Germans must be prevented”. Anti-immigrant again. Conservative.

9, “All citizens must possess equal rights and duties”. Well who would disagree with that?

10, “No individual shall do any work that offends against the interest of the community to the benefit of all”. The government shall decide what jobs are allowed and what are not, for the good of the community. I’d call that Liberal.

11, “all income that does not arise from work shall be abolished”. Obviously Liberal.

12, “Confiscation of all war profits”. I’d call that Liberal.

13, “Nationalization of all corporations”. Liberal.

18, “Traitors, usurers, profiteers, etc., are to be punished with death”. That is, rich people who take advantage of the common people should be executed. Few American liberals would go so far as to say such people should be killed, but it’s a clearly Liberal idea taken to the extreme.

19, “Roman law, which serves a materialist ordering of the world, be replaced by German common law”. I don’t understand exactly what this one means, so let me leave that unclassified.

22, “Abolition of the regular army and the creation of a national (folk) army.” That could go either way. Liberals tend to be anti-military, but Conservatives have qualms about federal power.

23, “A legal campaign against those who propagate deliberate political lies and disseminate them through the press.” Restrict ownership of newspapers by non-citizens. “Newspapers transgressing against the common welfare shall be suppressed.” Government control of the media in the name of insuring fairness and preventing lies. Liberal.

24, “freedom for all religious faiths insofar as they do not offend the moral and ethical sense of the Germanic race”. i.e. you can believe whatever you like, as long as you agree with government policies. Pretty much the Liberal idea of how freedom of religion should work: People should be free to practice their religion as long as I agree with it.

25, “COMMON GOOD BEFORE INDIVIDUAL GOOD. … creation of a strong central authority in the State, the unconditional authority by the political central parliament of the whole State”. Pretty much the definition of Liberal.

So in the final tally: Of the 25 points on the Nazi Party platform, 15 are liberal, 3 are conservative, and 7 are neither or both or hard to say. And interestingly enough, the 3 conservative ones are all really the same point: restricting immigration and the rights of immigrants.

Now of course in an anlysis like this, an obvious rebuttal would be, “Yes, that’s what they SAID for public consumption, but what did they really DO?” Politicians often promise things they think will be popular and then do something else. But in this case, I think the Nazis lived up to their campaign promises pretty well. You could say they reneged on 12 and 18, banning war profiteering and usury, and instead chose to get in bed with the profiteers. But the rest of the platform they carried out, most of it very enthusiastically and vigorously.