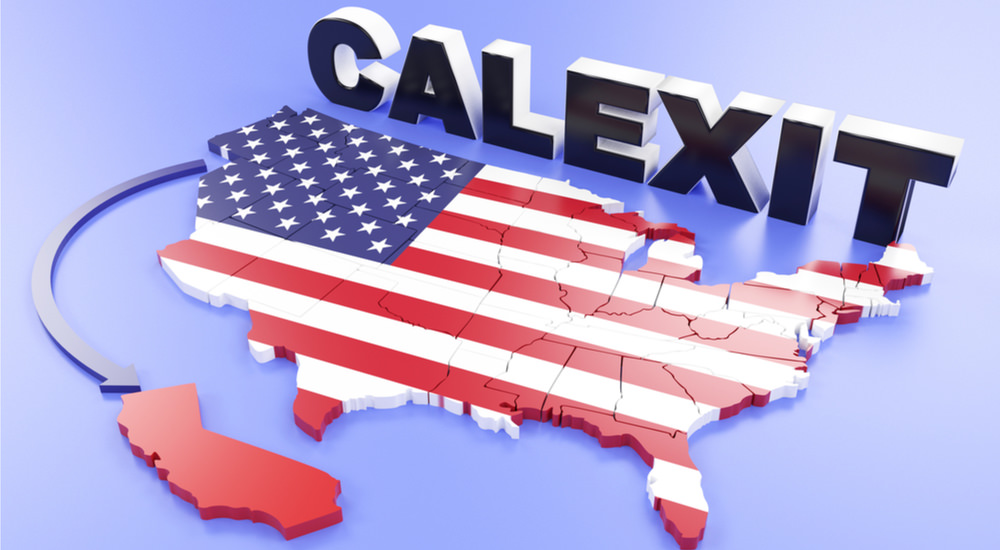 As the consequences of losing control of the federal government seeps into their delusional entitlement, the ultimate statists of the Left scamper to find a method to regain power.  A concept, whose day is gaining acceptance, is the Nation of Pacifica. With the incompatibility between the Trump Nation deplorables and the intolerant collectivists of Leftist state worshipers, the end game is rapidly approaching a final conflict that easily could erupt in a real civil war. Leave it to the beautiful people; their fantasia screen play scripts a peaceful dissolution of the disjointed union.  A sample of their dialectic:

“Because the citizens of the “red states” believe that their religious beliefs must be imposed by force of law and strongly object to the beliefs and lifestyles of the citizens of the “blue states”, it is likely that they will be happy to be rid of those that they view as “Satanically evil”. Once the Nation of Pacifica has been founded, the remaining United States can ban the import of the Hollywood movies, television shows, rock, hip hop, and R&B music, science and technology, and other secular influences they so strongly object to.”

How ironic that the self-proclaimed equalitarian proponents are so eager to adopt secession that even John C. Calhoun was reluctant to advocate prior to the War of Northern Aggression. “The right of secession; which, since the establishment of the government under the Constitution, had been held from time to time in the North as well as in the South as a theoretical possibility, was reserved by Calhoun’s Exposition as a last resort.”

Calhoun goes on to warn.

“The United States were something more than, and different from, a simple league of states, but should never become a centralized democracy ruled by absolute majorities — the “worst possible form,” “a consolidated government swayed by the will of an absolute majority.” Government by majority rule at all levels meant abandonment of all constitutional guarantees. The right of a state to judge, as a last resort, constitutional limits imposed on the federal government should be defended at all costs; otherwise the United States would be destroyed, becoming first a full-grown modern State and then an executive dictatorship.”

This comparison illustrates that the Left Coast Liberals have little reverence in constitutional restraints. If they cannot command supremacy over the federal government, they want out.

All the attention given to the Calexit movement has an underlying motivation. Conor Friedersdorf notes in the LA Times: “The main benefit of a California exit would be psychic. There is a subset of people here, mostly from the privileged classes, who feel sullied by their political affiliation with Red America. Secession would boost their sense of personal virtue.”

This is an important point that hits on a major difference in the clash of cultures that has been destroying America for decades. The self-absorbed progressive elitism that has infected the rugged individualism of the pioneer era has cleansed independent and common sense thinking. The emergence of a unified and intolerant “politically correct” benchmark is illustrated vividly with the obliteration of free speech not only on college campuses but more importantly in personal interaction between unacquainted individuals.

Red Alert sees the danger in Liberals’ California dream of secession will end up a nightmare.

“According to the L.A. Times, activists have submitted a proposed ballot measure to the state’s Attorney General with the hopes that the state will vote in 2018 to become its own independent country.

An independent California run by progressives may seem like a dream, but it would end up being a total nightmare. Places like East L.A. would look more like East Berlin.”

An anatomy dissection of dissimilar factions could take several books to cover. Needless to say, the issue is not that people have equivalent viewpoints or have egalitarian influence, but that economic dominance dictates the version of fabricated reality that define the “PC” popular attitudes.

All one needs to do is look to the major technological monopolies that have more to do with shaping a new age thinking than generating financial profit. The big five, Amazon, Apple, Facebook, Google and Microsoft are the most culturally destructive influences that created the divide between social humanism relativism and sound thinking traditional values. One is true blue the other is blood red.

Secession is an ecological malady for anyone who does not accept the tyranny of a deranged majority. Calhoun contends that “government action always creates two conflicting classes in the community: tax producers and tax consumers”. The parasite that progressives create to maintain their control over society will never be part of the elitism that will inflict any degree of chaos to return to their dictatorial oligarchy.

The economic model that the corporatists within the Nation of Pacifica foster is not one of independent proprietorship and ownership, but is one that is dependent upon getting an Amazon delivery for your toilet paper. Nor is utopia found when an Apple app tracks your every movement or preference. When your Facebook history is sold to unknown commercial interests, your privacy is sacrificed on the altar of intrusion. Is the censorship that Google searches provide a worthy pillar to build your new confederation? Finally, basing your digital footprint on a Microsoft program just limits your freedom to a flawed platform.

What these tech companies all have in common is that they are the brainchild of an incubator perception that the machine is destined to define what a human  can do or not do. The thought that libtards are so willing to turn over their daily routine activities to the cloud of an impersonal data depository is frightening. Progressive people are recessive thinkers.

Their dream of carving out their own separate state exemplifies the failure of persuasion for their flawed system of illusory idealism. All that is left is to impose their self-delusional desires upon an unwilling public. If secession was the alternative to rid American society of the curse of progressivism, those of us wearing a red cap would gladly tip our hat goodbye. However, when the California Hooligans are Anti-Free Speech Thugs apply their organized anarchy, violence to suppress challenging criticism is not guaranteed to stop against the remaining states.

Just how would California Dreaming: Bankruptcy, Pensions and Taxes be dealt with? The practical components of a clean financial separation would plague any separation. Assumption of their share of debt and obligations could be so high that an amiable break would be unmanageable. Add in the costs for establishing even a minimal defense force from nonexistent bases, and the task before the secessionists becomes herculean.

The validity of honoring and practicing States Rights is an essential part of a federalist system of government. Notwithstanding, respecting the innate difference among unique area and local customs presuppose a general adherence to a national creed of beliefs, common interests and core values.

The West Coast has expressed an overriding obsession to defy the historic traditions that grew out of a nationwide experience. Much of the momentum that globalists and internationalists have pressed to the forefront is aided by the celebrity worship culture. When metro sexual and urban social warriors demand that they ignore any federal law that does not fit their pie-in-the-sky views, you get a sanctuary safe space mentality.

Is there some path to achieve some joint rapprochement that could attain mutual acceptance? Compromise has been the norm for negotiations since the inception of the union.  Sadly, in today’s political climate, it does not seem any breakthrough is feasible that could bridge the gap.

When the walking dead go to Starbucks to get their political fix, they drink the poison of progressive psychosis. The hysteria exhibited at the Women’s March on Washington is testimony to the total disconnect from rational reality that exemplifies the mentality from the Left Coast brain drain.

How many more times does one need to mix water and oil and hope that they will not separate?  In the land of the Transhumanism cult and the Artificial Intelligence testing grounds to replace deplorables, the secession option certainly offers an attractive prospect. Research in all the biomedics laboratories advances the refutation of creation cosmology. By adopting a relativist social order, the clones from the new age has built a wall of existential exclusion from the heartland.

Secession of the West Coast would be satisfying as an alternative to resolve for many factions. The problem is that the imperial empire would be most reluctant to turn loose the hotbed of radical extremism. The real power elites would dispel any popular referendum that California might put on their ballot.

The dream of a cordial divorce is just a fantasy. The prospects of a resolution between regional protagonists are just not in the cards. The tarot readers are either too stupid or so devoted to their satanic metaphysics that they will continue in their pagan ways. God save the Republic fr9om a Nation of Pacifica.