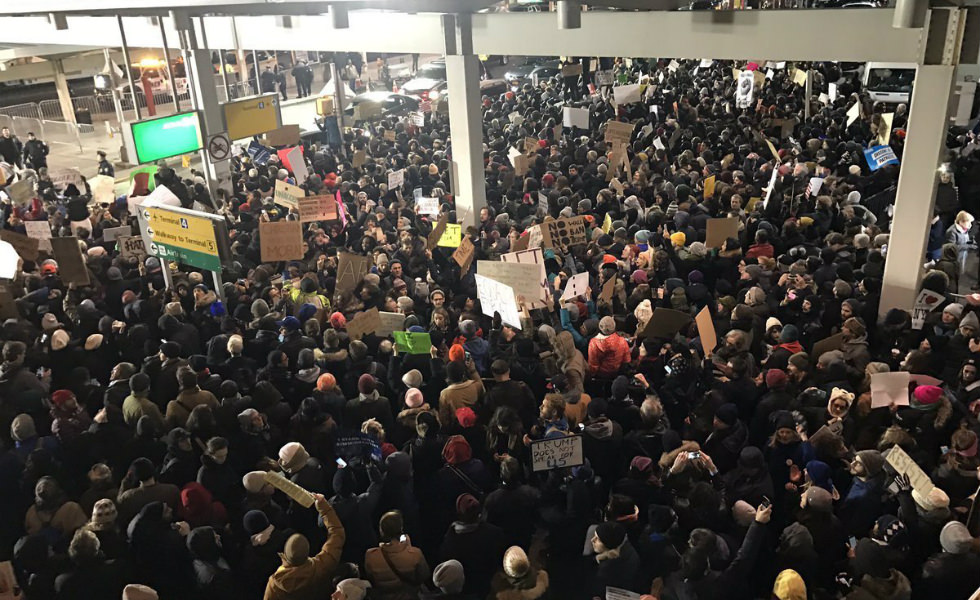 We went looking for the truth at LA International Airport, regarding last week’s protest against President Trump’s immigration order.  It was hard to find on a rainy Friday morning at Bradley International Terminal, the epicenter of the protests.

Exhaustive searching turned up just one-half-of-an immigration protester (the other half of self-identified “Mike-on-the-bike’s” public venting was spent proclaiming the end of the world for non-believers).

With the protesters apparently gone AWOL, our five-man Ventura interview team (rolling deep discourages assaultive behavior) turned to airport personnel to get some protest perspective.  Shop owners, airline workers, security guards and LAPD officers have a broad context of LAX experience for evaluating the impact and significance of any protest.  Their perspective and feelings about what really occurred last week varied greatly from the monolithic reporting in the traditional media.

Our information gathering was guided by a singular question.  Were the immigration protests the out-of-the-ordinary, “grassroots”, “historically significant”, “public outcry” claimed by Senator Tim Kaine (D-VA)  and echoed in the media?  Or were they an orchestrated, over-hyped, typical LA agitating about a cause-of-the-moment?  We walked through the terminal asking questions and listening.

How many people actually took part in the demonstration?

“There were maybe 1,000 protesters showed up.” (Luggage store owner )

Was it the energized, public outpouring of  emotion claimed by Senator Tim Kaine? (D-VA)

“The protest was chaotic and very emotional.” (Rene – maintenance worker)

“There was no real problem; no violence.” (Security guard and an airlines hostess)

Was the protest spontaneous or orchestrated?

“These protests are organized on social media. We monitor it, so we know.” (LAPD officer)

Were the protesters committed to their cause and supported by all racial minorities?

“The protesters were very real; just like the marchers for Civil Rights in Mississippi in the 1960’s.”  (Black airport worker)

“The protesters aren’t even here this morning because they don’t want to come out in the rain.  I hope you came to beat them up.” (Latino airport worker, laughingly offering us fist bumps of encouragement).

Should immigration be regulated?

Everyone should have a right to come take advantage of opportunities in the US.” (Rene)

If  anyone wants to come into the US, come in legal.” (Tho)

How do you feel about President Trump and what he’s doing with immigration?

“I didn’t vote for Trump, but we really need change.” (Mayela – Latina)

We didn’t find all the answers to the growing immigration debate stirred up by the President’s new approach.  They probably won’t be found during the next four years.  What we DID confirm is that – unlike what traditional media reports claim, there are many – and constantly changing viewpoints regarding Trump’s efforts to return the US to a nation of laws.