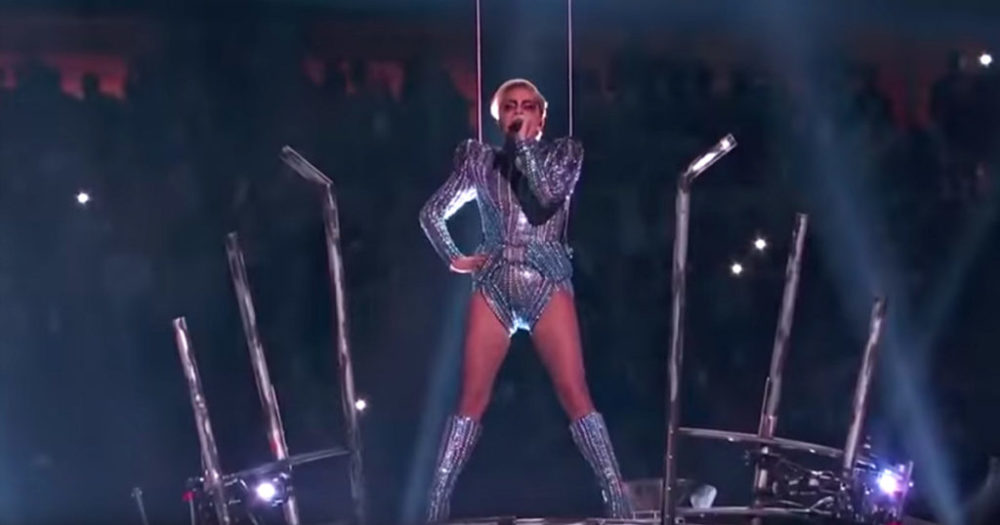 When it was announced that Lady Gaga was going to be the performing during halftime of Super Bowl LI, I really did feel my heart sink. I have come to dread participating in pop culture events because over the past two years, A-List celebrities have hijacked those events and turned them into lectures about how horrible I am for being white and having a job.

It grates on you. Turning on the television now a days is like being in an abusive relationship. You’re going to be berated and chastised and made to feel like you’re an awful person just for being who you are.

And Lady Gaga is no stranger to using her stage (literally and figuratively) to push a social cause. She’s already been crowned the champion of the LGBT community thanks to her anthem “Born This Way” and good for her. In actuality, it’s a good song regardless of the message.

So, naturally, we all sat and wondered what Lady Gaga was going to do with 172 million people watching her. Surely in this age of Trump-bashing and burning down schools, we were going to get some kind of message about Trump being “Hitler” or how immigrants built the country or how Muslims are peaceful, etc.

But like the famous “meat dress” at the 2010 MTV Video Music Awards, Lady Gaga did not fail to shock us.

She performed a medley of her hit songs including “Born This Way,” “Poker Face,” “Million Reasons,” and “The Edge of Glory” coupled with “This Land Is Your Land” and “God Bless America.”

Wait…. she performed? She sang and danced and played piano… like an actual musical entertainer? What the heck kind of A-lister is she?

That was the biggest shock of all.

What a novel idea: a woman who has a remarkable voice and an incredible talent actually played a series of songs for a nationwide TV audience, said thank you, and left the stage. I have to admit, it was somewhat refreshing.

What happened next, however, wasn’t NEARLY as shocking.

The Left – predictably – went bonkers and ate their young. The Los Angeles Times said she missed a chance to say something profound. Variety said she took the “safe route.” The Huffington Post said her message was “subtle” presumably because most of the people who watch football are homophobic, gay-haters.

So desperate to get just a little bit of anti-Trump bashing in (at this point, it’s literally like a heroin addiction. Progressives HAVE to get a spoonful of Trump hate in everyday or else they get the shakes) USA Today looked for hidden meanings in the performance. Because it’s impossible for the Queen of the LGBT Rights moment to actually sing a song and not have it mean anything…. right?

There was no message. It was a professional performing her craft and executing it to perfection, with a nod to her mom and dad at home.

Not to mention it was enjoyable. I’m normally the guy at the Super Bowl party making sarcastic cracks about the half time show, but I really had nothing to say at this one. Lady Gaga made Beyonce’s show look like the guy with the white bucket and drumsticks on the subway platform.

What we saw Sunday night, hopefully, will carry over in pop culture. Maybe at the Oscars we’ll hear actors say they’re looking forward to making more great movies and they hope the fans will see them again. The New England Patriots have a sign in their locker room that says, “Do your job.” Red carpet celebrities would be wise to take notice and follow that mantra.

It won the Patriots a fifth ring. It won Lady Gaga a boatload of respect.