How Do We KNOW Those We Have Never Met? 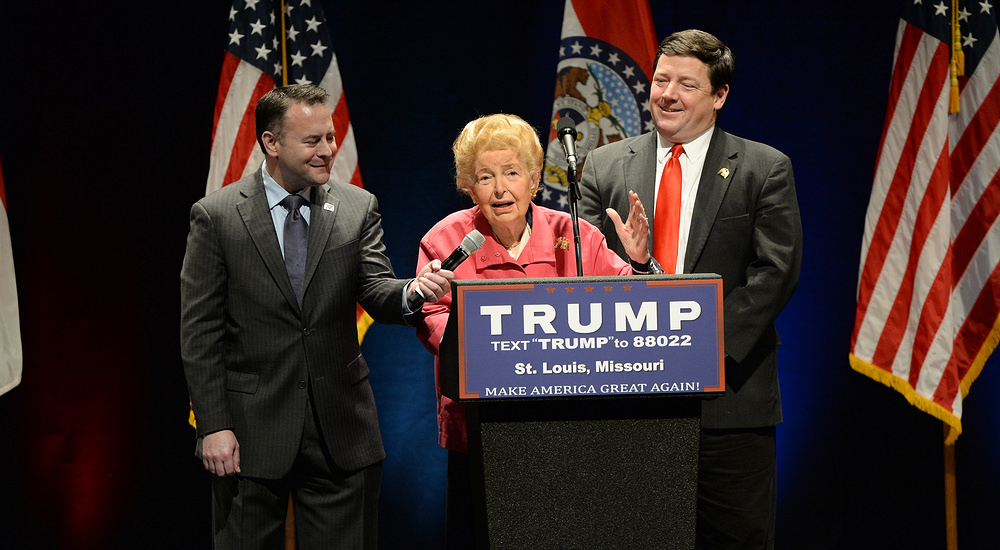 How do we KNOW those we have never met? And how is it we sometimes never really know partners, friends, or acquaintances we have lived around, near, or close to for years? A year ago Phyllis Schlafly said to her son regarding Donald Trump. “He is a choice, not an echo.” She had never met Trump. Not so much as a phone call. She just knew. She said, “Choice, not an echo” to her son referencing a book she had written nearly fifty years before.

It was her first book, her first salvo, an expose of the then kingmakers of the Republican Party. Regarding those kingmakers she said they never led the Republican Party toward a choice in opposition to the Democratic Party’s “New Deal.” Instead the kingmakers invariably selected for Republicans, deftly wheeled them toward, nominees fully in agreement with the New Deal, though slyly disguised in a less recognizable and somewhat weakened form. Their selections were invariably an echo of the real thing, of the real New Deal. Her point. Who votes for fakes when the originals are on the same ballot?

From that afore mentioned moment with her son little time passed before she walked on the national stage to voice her support for Donald Trump as the anti-kingmaker choice the Republican Party should take as their nominee for the highest office of the land. People like Schlafly do it all the time, put on trial the character and worth of people they have never met. We do not know far more people than we do know. We subsequently give hearings to defendants, listen to the evidence, and pronounce judgments in our own minds far more frequently than we judge defendants in person. That is how it is each of us having never met any of them has favorite and most hated celebrities: whether they are vocalists, bands, actors, actresses (old school), or dancers on Dancing with the Stars.

Most of us have not had the privilege of rubbing shoulders with powerful politicians and wealthy donors plying their influence. Yet we vote for or against the candidates. Before we vote we put them and their financial supporters on trial. Then we voice our opinions in support of or against. We watch TV commercials. On the basis of anonymous and famous spokespeople alike we put our hard earned money down and buy products as they represent them.

In the course of our daily lives we put on trial, decide whether or not to place our trust in far more people we have never met than we have met. So Phyllis Schlafly did no unusual thing. She did what we common, normal people do all the time: she declared for a candidate, for Donald Trump the first real choice the Republican Party has had since Reagan. She did so without having ever met the man. That is normal, what most of us do before we decide our vote.

How do we do it? How do we quite often successfully judge people on the basis of their character and attributes? Without ever having met them? Perhaps we take note of visual and auditory cues. Likely the subconscious is working overtime, hopefully more often than not to our benefit. Then there is talk of the intuition slightly more than half the population possesses. Maybe trees get in the way when we are up close to people, friending them. Perhaps proximity prevents us from noticing the forest: the preponderant features of their lives that could make a difference for the good, or for evil. It’s likely we lose objectivity when drawn close to highly influential people. That which James Bond’s villains call his greatest weakness might show up: his passion for the innocent to remain among the living, especially those he adores, in the moment. Ah! That moment, when he should have realized the alluring prospective heroine was herself THE villain, the worst of villains, the ringleader of all the other villains.

Harrison Ford suffers from the same virus: a fond ill-placed dependency on those who later turn against him. He was double crossed in at least two Indiana Jones films: The Last Crusade & The Kingdom of the Crystal Skull. Also in Air Force One. One turncoat was a longtime friend. Another was a woman who befriended him, yet another a fellow professor and associate for twenty or thirty years, and finally a Secret Service agent assigned to protect him. Wouldn’t be surprised if he has been betrayed in all his movies, just hadn’t taken note of the frequency before now.

The Freedom From Religion Foundation and their proponents, also The Right Scoop and #NeverTrump all discourage the practice of placing trust in those we have never met or seen, even from a distance. On their part the FFRF, comprised of scientists who rarely are scientists, hold we cannot know that which we have never seen with our eyes or touched with our hands. Nicodemus tried to grasp the opposite of that concept one night, perhaps he did, that even though we can’t see the wind we must acknowledge its existence from the sounds and affects it produces. Though we don’t know where it comes from or where its ultimate destination is, wind impacts and sometimes thoroughly changes our lives forever. “So it is with the Spirit,” Jesus said. Come to think of it, why isn’t there a FFAF in America, a Freedom from Atheism Foundation? Just asking. Doesn’t it make sense the FFRF should never have standing in an American court of law? Especially since they deny the very existence of He in Whom Americans put their trust when we founded this country.

As for Right Scoop and their #NeverTrump enablers, many of which we might suspect are descendents of the Republican Party kingmakers Phyllis Schlafly exposed some fifty years ago; they have their own style difficulty with the invisible, their minds mired in their myopic conservative world milieu. For them, Trump does not exist. They refuse to recognize or admit anyone supporting Trump is a conservative. They talk over their fellow conservatives; will not honestly engage in dialogue with them. One site banned a Trump supporting conservative from their website. Not for any contrarian view, but solely because he supported Trump.

We will miss Phyllis Schlafly for many reasons. Especially we will miss her because next time, who of a national stature will “with a whole heart” scour the nation to find for us a choice, not an echo? Not only did it take all her heart to find Donald Trump; it required her whole heart before it can be said her search even began. For we should not imagine a half hearted search is a search, much less the path to a find. It takes all the heart, from the beginning, or there has been no beginning. That is what the text of Jeremiah 29:13 teaches. That is the instruction Phyllis Schlafly lived by, demonstrated to us her whole life.

All Americans before they vote in November should pick up, read, and possibly study thoroughly Phyllis Schlafly’s first and last word on that which for fifty years she searched for, found, and ultimately concluded about Donald Trump. Interested individuals can click on the following links for her first book: A Choice Not an Echo: Updated Expanded 50th Anniversary Edition and her last book: The Conservative Case for Trump.