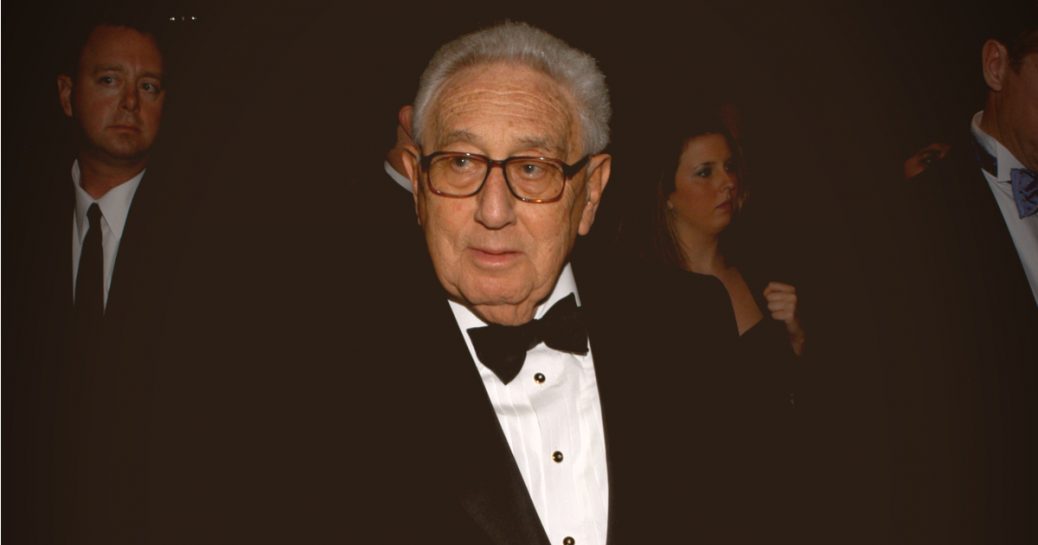 “The Military/Industrial Complex in the Age of Aquarius”

So how is the fictitious but highly-touted World Peace to work? Will the MI Complex breathe a sigh of relief and say, “Finally. We have achieved our goal. World Peace. No w we can stop making billions per annum. We don’t need money any more. Thank you, Antichrist.”

No. The Bible, if you will, warns of the profiteering of the MI Complex, right up until Armageddon. “When people say, “There is peace and security,” destruction will strike them as suddenly as labor pains come to a pregnant woman, and they will not be able to escape.” (1 Thessalonians 5:3).  They pride themselves in outsourcing America’s war-industry jobs to other countries, where armaments can easily be sabotaged.

Kissinger, who considers his writings greater than the Divinely-inspired Word of God, vigorously and falsely assures American dupes that they will gladly exchange their freedom for security. But this is one of the grandest lies of the NWO ilk.

There will be no real peace and security till Jesus the Messiah returns at His Second Coming. He will destroy the final blood-business products of Armageddon with a breath of His mouth. And only THEN will there be peace, freedom and security. The MI Complex will continue its final profiteering till then… Globalist Lemco will continue manufacturing its armored Bearcats, making sure global citizens have exchanged their freedom for security.

And for the MI Complex to expand into space, America’s generals, like timid children, line up to be the corrupt spokesmen for upcoming “space wars” and how we must be “prepared.” Send your money into space to insure MI Complex profiteering! To further legitimize this, liberals who infiltrated high-ranking Catholic positions go along with their agenda. To see an example click here:  https://www.youtube.com/watch?v=jNnUgXFBQuU

The ultimate message from the above UFO landing pad plaque will be, “The aliens promised to save us from nationalism.  But now they’ve turned on us!  California fires are systematically lasered from the sky!  So we must save ourselves from nationalism and from hostile aliens!”

And for the MI Complex to continue, Bibles will be confiscated, so they can no longer expose the classic Kissinger lie. Despite Israel’s signing of the Isaiah-prophesied, peace-treaty Agreement with Sheol (agreement with the world of the dead) to bring on Jacob’s Trouble for seven years, the MI Complex will make sure it doesn’t happen, until Christ returns to destroy them and their profiteering products.

And what related lies will people believe along with the grand Kissinger lie? (Who unquestioningly has investments in the MI Complex, along with Bush and Obama and the Clintons.) Well, we can start with their New Age lie that we are undergoing a major paradigm shift from the Age of Pisces to the Age of Aquarius.

The Age of Pisces represents, for the occult New Agers, the “Christian age.” And for the dawning of the Age of Aquarius to be successful, the Christians – who channelers and spirit guides allege “Destructively affect the very ethers in the sky, posing an environmental problem” (another lie) – must be removed.

There will be no real peace and security till Jesus the Messiah returns at His Second Coming. However, The Armageddon Script by Lemesurier reveals an attempt is underway to put a fake Jesus on the Mount of Olives – even with fake scars – for all the world to see. Armageddon will “already have happened” and the fake but convincing Jesus will give peace and prosperity for 3 1/2 years.

And the final bogus messiah will give “peace and safety to Israel” for the same 3 1/2 years, until he sets himself up in the Temple and for political purposes (see the Paul Blanshard books) declares himself to be god. Continuing the “deification of a leader” for political purposes, as seen throughout the turbulent 20th century. At this point, Israel will realize it made a mistake, and many will flee Israel; as the MI Complex continues another 3 1/2 years, until its final build up and destruction at Armageddon.