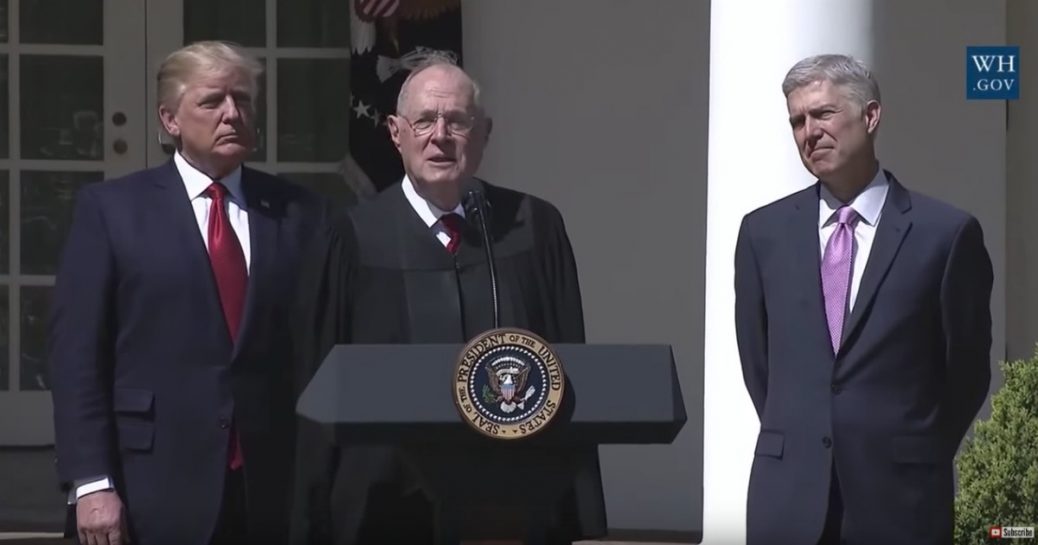 This may be true on the World stage, but it is not the case domestically. For years now, supreme Court Associate Justice Anthony Kennedy has been the most powerful person in America.

While this is an abomination of federalism, it is never the less true. And it’s something that seems to be thrown about as no big deal by the legal, political and pundit class. But it is a big ‘F’ing deal (h/t Joe Biden), yet has evidently become the new normal.

We have devolved from the Founders’ vision of three equal branches providing checks and balances on one another, to being ruled by nine black robed oligarchs, to now the reality we face today. That our freedoms and liberties, our economy – everything we hold dear, is controlled by a single individual.

In Justice Kennedy’s hands (or his vote), he holds the future of America. We have never been so close to a dictatorship as we are today. And by one who cannot be voting out, or otherwise removed. Like a dictator, it is he and he alone who decides to stay or go. But unlike a Dictator, there is little fear of assassination.

Many on the left, and the right, have stated their fear of president Trump becoming a strong-arm dictator, but that fear has little merit. Just like Obama – regardless of what he does, what harm he can cause to, or good he can do for America (depending on your perspective), it will last for no more than eight years. After that, if his successor wishes to undo or change things, he or she is able to try. In other words, anything a President does can be undone.

And as most important decisions recently have been of the narrow-margined, 5-4 variety, this puts Kennedy clearly in charge.

So “in charge” is he, that Elizabeth Wydra, president of the leftist Constitutional Accountability Center wrote a piece attempting to convince Kennedy not to retire.

“It is impossible to imagine any stronger or more able steward of Justice Kennedy’s legacy than Kennedy himself. In the years ahead, Kennedy’s influence over the nation’s future will be more compelling than ever. In short, the Supreme Court is once again the Kennedy Court,” Wydra quipped. By “once again,” she of course means that we are back to a nine-justice court. What she says is not at all terrifying.

As scary as this is, she is absolutely right. ObamaCare not withstanding, the decisions of the high court normally split evenly. Roberts, Alito, Thomas and (hopefully) Gorsuch are, within reason, Constitutionalists, as opposed to the socialist one-mind collective of Ginsburg, Breyer, Sotomayor and Kagan. Rarely do these four stray from an unconstitutionally progressive decision.

This leaves Kennedy as the wild card, capable of wielding such power over an entire nation as to make Ramesses II jealous. Ramesses II is considered to be the most powerful of all the Pharaohs.

And one has to wonder if he looks at his situation this way. I assume he must, although it doesn’t appear to have gone to his head – yet.

My hope, and I’m sure that of all conservatives, is that Kennedy goes quietly into the night (as in retires – not dies) without a fuss and with as little fanfare as possible, so Trump may nominate someone we, and more importantly, the Constitution, can consistently count on.