Judge not, that ye be not Judged 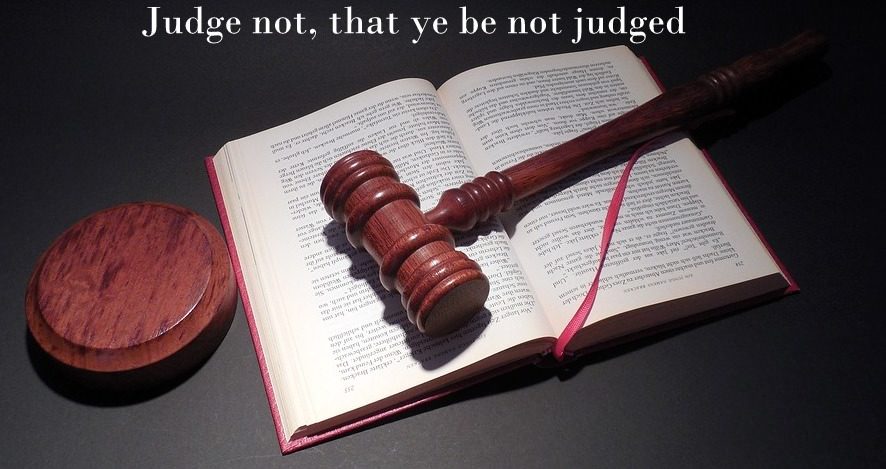 Judge not, that ye be not Judged

We see this quote from Matthew 7 all the time. Whenever a Christian takes a stand against something or someone that goes against the politically correct stance of the day that quote is pulled out and use against them.

“Don’t you dare judge someone; remember what Jesus said about judging.”

When they do that, they themselves are judging. But they don’t see it that way, do they?

They are judging us because we are daring to speak up about something they are doing or believing. But they foolishly are doing the same thing, judging. They should re-read the whole passage about judging.

They are judging us because they see something in our behavior, but they can’t see the large problem in their own behavior.

They cry out that we must tolerate the thing that bothers us about them, but they cannot tolerate anything about our beliefs.

They are judging us but demanding that we NOT judge them.

The truth is that we make judgements all the time, about everything. Where we want to eat, what doctor to see, where we want to live, what car we drive, and what church we go to, and on and on. We judge all the time, not to mention the legal Judges whose job it is to judge.

They tell us not to judge, but we are told in 2 Timothy 2:15 to judge the truth.(King James version)

Study to shew thyself approved unto God, a workman that needeth not to be ashamed, rightly dividing the word of truth.

To rightly divide the word of truth is judging what is right and what is wrong. We are to judge sin, you see, with God’s help. We do that by studying the word of God, the Bible, and working to understand what truth is.

What we are not to judge is what is in a person’s heart, that is something only God knows and He is the one to judge based on that.

If we are not to judge or point out sin then Jesus would never have had to give instructions in Matthew 18: 15-17 on what to do when we see someone committing sin.

15 “If your brother or sister sins, go and point out their fault, just between the two of you. If they listen to you, you have won them over. 16 But if they will not listen, take one or two others along, so that ‘every matter may be established by the testimony of two or three witnesses. 17 If they still refuse to listen, tell it to the church; and if they refuse to listen even to the church, treat them as you would a pagan or a tax collector.

When it comes to sin, we are to do something or say something about it. But only God knows what is truly in our hearts.

We cannot know what is in the heart of another person.

Recently I was at a funeral of a friend of mine. I say he was a friend, but in truth I didn’t really know Bob all that well. I spent time with him over the years, but I had no idea who he really was. I knew he was a believer in and follower of Christ and a nice man, but beyond that I didn’t really know him. It had been years since we had been around each other, accept for an annual party we both attended.

As I sat in Church listening to his friends talk about all the things they remember about him, I realized that we don’t really know anything about those we are close to. Listening to all of the good he’d done for others, it reminded me of another memorial service I’d been to years before.

Lee was a man I’d worked with and partied with off and on for a few years but I didn’t really know him. I knew he was a talented performer and the life of any party, but I never knew all of the things he’d done to help others in their walk of life. Was Lee a Christian; that I don’t know and couldn’t know from what those who talked about him told us that night.

Beyond his being a good man, helpful and fun to be around, I didn’t really know him.

I don’t think any of us really know those near to us. Even a spouse can surprise us after years of being together.

I would be willing to bet that if we were at an honest memorial service of the nastiest, most evil person we could think of, some would still say things about them that would surprise us. Things that would show them in a much better light then we would have cast them in.

We also judge in the world of politics all the time.

I know there are certain politicians that I can’t stand. I have no idea why anyone would vote for them, but they do. And on the other side of the political fence those people can’t conceive of why I vote the way I do either.

When I think of those politicians that I dislike, I am sure that if I got to really know them, there would be somethings I might admire about them. You see, I don’t know their hearts, and neither do you.

I cannot judge their hearts anymore then I can judge yours.

I cannot truly judge your heart, though I can rightly judge you for the things that you have done that are sinful and wrong both in the eyes of God and man.

In truth you or some politician might be doing or saying something that I dislike, but I don’t know the whole truth of the matter. There are always things that a person does that may seem wrong to me, but if I knew the whole story I’d think differently about their actions.

The Bible tells us that we have all sinned and fallen short. There is none of us who has not messed up in some way and we continue to mess up.

That is why God sent His only begotten son, Jesus, to this world to take the punishment on Himself that should be handed out to us.

Jesus tells us in John 12 that He was not sent to judge the world, but that His words will judge those who sin.

47 “If anyone hears my words but does not keep them, I do not judge that person. For I did not come to judge the world, but to save the world. 48 There is a judge for the one who rejects me and does not accept my words; the very words I have spoken will condemn them at the last day.

It is not our place to condemn a person for their actions or beliefs.

That is not our job.

But it is our job to point out where they are going wrong.

We should not judge to condemn any person, we should work to correct them and lead them toward the right path. If they won’t listen, won’t change direction, then it’s up to God to deal with them.

I wish we could all remember a lesson from Paul about this, when he said in Philippians 2:3-4;

3 Do nothing out of selfish ambition or vain conceit. Rather, in humility value others above yourselves, 4 not looking to your own interests but each of you to the interests of the others.

Good words we should all try to remember.

I was born in Rochester Minnesota in 1952 and grew up in a Christian home. I knew about Jesus, but never really knew Him until one night in 2003. I have worked as an Actor and successful salesmen for the Schwan’s Home Service Company and now work part-time at a local Furniture Store. I am the owner of WakeTheChurches.com and use that site to try and Wake People up to the truth of God and His Word. I see the world around me; and I can see that the time is short. There are so many problems in this world and there is really only ONE Solution. Jesus Christ. We as a country, we as a world need to WAKE UP to His truth, the Truth of the Bible. It matters not who is in the White House in the long run, it matters who is in our HEARTS.