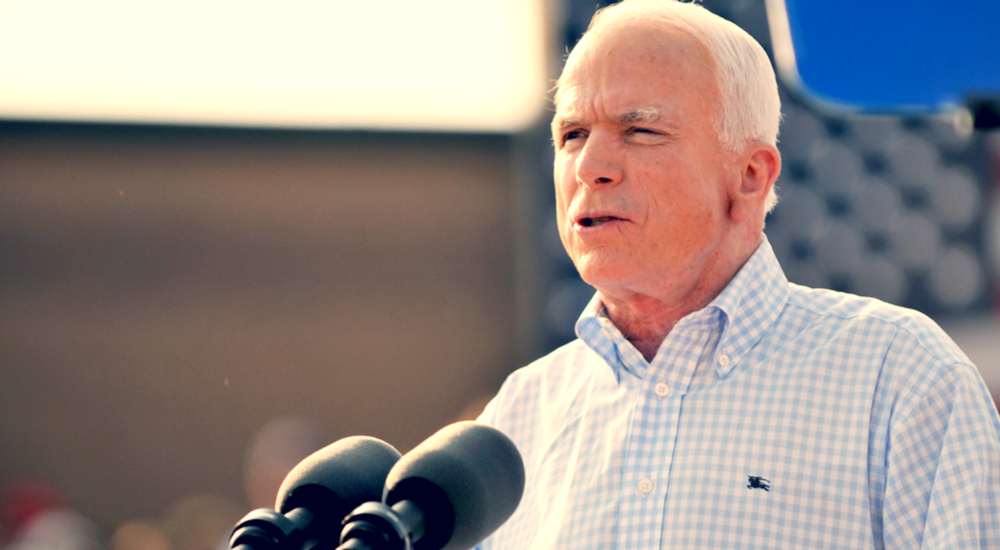 John McCain was a far more interesting, colorful and controversial man than most Americans and no journalists know.   If you saw the Sunday political shows you would think a saint had passed on.  John McCain was a man driven by two ghosts:  His father and grandfather.  Both were four-star Admirals in the US Navy so John’s appointment to the US Naval Academy was his destiny, but John McCain graduated 894th in his class of 899 students. He was known for being wild, chasing young women.  He was in a student group calling themselves “The Bad Bunch.”

John married Carol Shepp, a swimsuit model who had been married to one of his classmates with whom she had two children. She and McCain were parents of a daughter in that marriage.  At heart a playboy, John was soon bored with domestic life and as advancement was more likely in the military services in combat he requested active duty in Vietnam. While there Carol faithfully stayed at home looking after the children.

His plane was shot down in 1967 when he ignored mission instructions to stay above 15,000 feet he went “down on the deck” and was shot down, survived and became a Prisoner Of War, POW.

On Christmas Eve 1969, Carol and slid head-on into a telephone pole taking gifts to friends. She was thrown from the car through the front window. Her legs, spine, and right arm were crushed and she was in the hospital for six months. Ross Perot was an advocate of POW’s and paid her extensive medical bills. She requested John not be told feeling he had enough to deal with.

McCain was released in 1973 and returned home to much fanfare. Carol’s several surgeries cost her five inches in height, and she gained weight. McCain told reporters he was overjoyed to see Carol again. But friends said he was appalled by the change in her appearance.

As a war hero, McCain moved in elevated circles. Reverting to his old ways  he started “running around with women.” according to Robert Timberg, a retired Marine, journalist, and author of four books, including “John McCain: An American Odessy.”

McCain admitted he started having many girlfriends and affairs during this time. On one trip to Hawaii, at a cocktail party. he met Anheuser Busch distributor heiress, Cindy Hensley.  She was 17 years younger than McCain and worth $100 million dollars. He invited her to have drinks with him at the Royal Hawaiian Hotel. He said by the end of the evening he was in love.

They had an affair for nine months, while he was still married to and living with his wife Carol. McCain wanted to marry Cindy but needed to get a divorce. He and Carol separated in January 1980. He requested a divorce in February; the divorce was sped along and granted in April. John and Cindy married five weeks after the divorce was final on May 17, 1980. Carol and their children were devastated.  McCain callously left his first wife and children behind. He and Cindy moved to Arizona. Cindy’s father was well-connected and helped McCain move smoothly into Congress representing Arizona in Washington DC.  John McCain has been in Congress since 1983.

McCain’s new wife and her family were extravagantly wealthy. Her father was one of the largest distributors of Anheuser Busch in the country and she an only child. The divorce settlement afforded Carol McCain full custody of their three children, alimony, child support, including college tuition, houses in Virginia and Florida, and lifelong financial support for her continuing medical treatment from the car accident.

Carol said the reason for the divorce was John turned 40 and he wanted to be 25 again. Carol was extremely hurt. She went to work as the press assistant for soon-to-be First Lady Nancy Reagan. She was respected in Washington and kept a dignified silence about the way John McCain had treated her.

Some of the McCain friends were less forgiving, however. They portray the politician as a self-centered womanizer who effectively abandoned his crippled wife to “play the field.”  They accuse him of finally settling on Cindy, a former rodeo beauty queen with a barn full of money.

Ever the opportunist, John McCain ran as a Republican, but spoke, voted and collaborated as a Democrat.  No wonder all the national television shows treated John McCain as a modern saint.  He was not, but we can understand the “ants in his pants.” He lived haunted by his father and grandfather.  Two bona fide war heroes.

Ross Perot paid her medical bills years ago, says both Carol McCain and the American people have been taken in by a man who is unusually slick and cruel, even by the standards of modern politics.  Perot said, “McCain is the classic opportunist. He’s always reaching for attention and glory.”

Cindy has also had to learn the lessons about her husband the hard way. Even though she and McCain put on a perfect front for the public, especially when he is running for office, she is an invisible wife.

Tom Gosinski, who served as the Director of Cindy McCain’s nonprofit American Voluntary Medical Team, AVMT wrote in his journal of the McCain marriage:  “During my short tenure at AVMT I have been surrounded by what on the surface appears to be the ultimate all-American family. In reality, I am working for a very sad, lonely woman. Her marriage of convenience to a U.S. Senator has driven her to distance herself from friends, cover feelings of despair with drugs, and replace lonely moments with self-indulgence. She became addicted to Percocet and had a doctor prescribing them for her illegally. When her parents learned she was taking them, they helped her stop.

Washington rumors were saying McCain had an inappropriate relationship with the young and lovely lobbyist, Vicki Iseman. Ms. Iseman began visiting McCain’s offices and campaign events so frequently in 2000 that his aides were “convinced the relationship had become romantic.”  One staff member supposedly asked, “Why is she always around?”

His staff members began a campaign to “save McCain from himself” by restricting Iseman’s access to McCain during the year 2000 Presidential Primary. According to the Washington Post, McCain’s political advisor John Weaver met with Iseman at Washington’s Union Station to tell Iseman not to see McCain anymore.

It is not a real marriage between John and Cindy McCain. Real marriages involve living together. McCain and Cindy have not “lived” together for 20 years. To defend this, McCain brags the family takes two vacations together every year and Ms. McCain is the one who has always made that happen.”

Two vacations per year!  Little of this man was real. He had no compassion or empathy for anyone except himself. The only real thing emotion he was capable of was anger.  He is famous for his anger.

His father and grandfather were both decorated Navy Admirals. He was given special privileges and extreme preferential treatment while he served in the Navy. He was a pilot but according to his colleagues, he was a very bad pilot. He actually crashed three planes. There was a horrendous incident that happened on his aircraft carrier, the U.S.S. Forrestal, that killed 134 men. There has been a rolling debate since the incident and some are convinced John McCain was responsible.

Witnesses reported McCain attempted a “wet start.”  When a pilot wants to be a show-off, with a “wet start” his engine start creates a large startling flame and lots of surprise noise from the rear of a jet engine on startup. McCain did the “Wet Start.”  The flames torched the launch of a Zuni rocket on the plane behind him.  Zuni rockets were notorious for problems. It shot across the carrier’s deck hitting other parked planes that were packing 1,000 high-explosive pound bombs which exploded.  Destruction and fire went several decks below and nearly sunk this major 82,000 ton U.S. aircraft carrier.

This stunt caused the death of 134 sailors and blew off arms, legs, and caused blindness and burns to another 161 sailors. McCain jumped from his plane, rolled across the flames, and escaped. He watched the men dying and the burning from a closed circuit television on the ship.

The ship off line for two years in port for $76 million dollars of major repairs, not including the cost of the airplanes or ammunition.  Any other Navy pilots causing this type of death and destruction would have been arrested and still be in prison, but not John McCain III.  McCain was not even reprimanded. When there is a cover-up, the soldier is usually simply assigned to another ship. McCain was quietly assigned to another ship. There is an ongoing debate about the incident to this day.

John McCain’s lack of character was further demonstrated when he voted not to repeal Obamacare. He ran his 2016 Senatorial race under the banner he would lead the fight to repeal Obamacare!  But, he hates Donald Trump so very much he gleefully held his thumb down for his vote rather than give a thumb up.  He laughed afterward saying, “Let’s see Donald Trump save America now!”

John McCain there stabbed his constituents and the citizens of America in the back. John McCain, Liberal Socialist Hero!