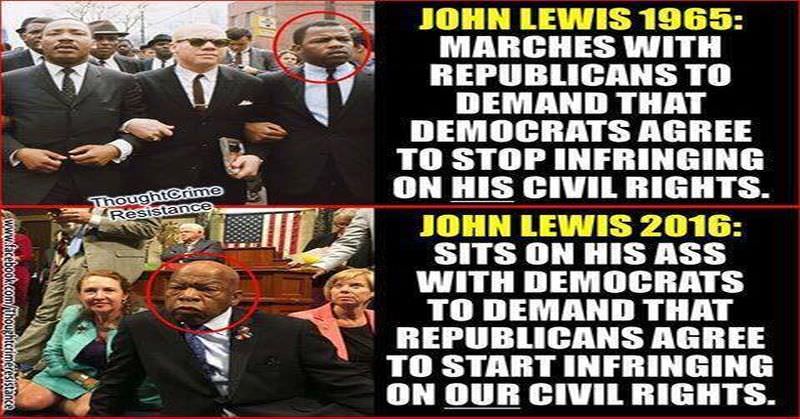 Like Aaron who built a golden calf in the bible to bow down and worship, John Lewis hides behind his civil rights work a half a century ago and is still singing the same old tired song, “we shall overcome”. Lewis’s comments about Trump are not only conspiratorial, unproven, and divisive, they also question the legitimacy of the nation’s electoral process. “I’ve been around a while and Trump reminds me so much of a lot of the things that George Wallace said and did”. This is not the first time he has resorted to hatred and bigotry.

He recently suggested Sen. Jeff Sessions, R-Ala., might be another George Wallace, the late democrat governor of his own state, forgetting that Sessions held Lewis’s hand on the Selma bridge. Why did he draw that conclusion? Because he is white? Lewis accused Sen. McCain and Gov. Palin of sowing the seeds of hatred and division, He claimed that Mitt Romney if elected would bring back segregation. He falsely accused tea-party demonstrators of using the “N-word” during an anti-Obamacare rally at the Capitol. Lewis went beyond partisanship in questioning the civil-rights credentials of Sen. Bernie Sanders, D-Vt., because he opposed Hillary Clinton. Then Lewis said grimly: “Read the Republican contract. They are coming for the children. They are coming for the poor. They are coming for the sick, the elderly, and the disabled.” Lewis lauded the Socialist Party of America founder Paul Robeson, a devoted admirer of Soviet dictator Joseph Stalin. In 1967 Lewis paid tribute to Norman Thomas and was one of the 29 Democrats who opposed a resolution deploring the Sandinistas’ action.

It is about time we call out bigots and racists for what they are, black or white. Trump spoke out in a tweet saying, “Lewis should spend more time on fixing and helping his district, which is in horrible shape and falling apart,” More than 1,694,988, or 17% of Georgians live below the federal poverty line of $24,300 for a family of four. That qualifies the state as having the sixth-worst poverty rate in the nation. Georgia’s poverty rates have steadily climbed despite the recent recovery of the state’s economy. While the study says 31 percent of Georgians are black, they comprise an estimated 45 percent of the state’s impoverished residents. “Unless Georgia addresses the fundamental causes of persistent poverty in Georgia, low-income Georgians will continue to struggle for economic survival instead of being valuable resources to the state,” GBPI Policy Analyst Melissa Johnson wrote. Where is their legitimate elected representative?

John Lewis is a person who should be totally ignored. It would be ironic if Trump turned poverty and unemployment around in Lewis’s own state. Georgia’s major industries are agriculture, timber, and textiles. The state also benefits greatly from a military presence. Fort Benning, Fort Stewart, and Robins Air Force Base are the state’s three largest employers. In 50 years John Lewis has not moved ahead and built upon the great changes this country has made. Instead, he has become the Uncle Tom of the Democrat Party. He has sowed the seeds of hatred and division. What he did a half century ago is not enough to disguise his hatred and bigotry that he still shows us today.