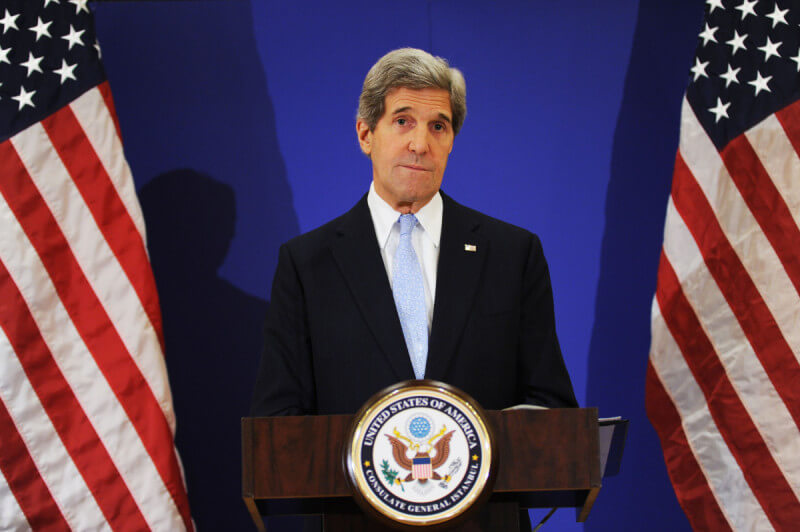 De Facto Secretary of State, John Kerry in his Friday’s (May 6, 2016) commencement speech to Northeastern University‘s graduates told the world he was proudly predicting the continuing fall of the U.S. Constitution and the destruction of the United States. He proclaimed, “You’re about to graduate into a complex and borderless world.” Kerry’s words violate the Constitution! The borders of the States of America and “new citizens” are referenced in our founding document:

Art I – Section 9 – Limits on Congress

The Migration or Importation of such Persons as any of the States now existing shall think proper to admit, shall not be prohibited by the Congress prior to the Year one thousand eight hundred and eight, but a tax or duty may be imposed on such Importation, not exceeding ten dollars for each Person.

New States may be admitted by the Congress into this Union; but no new States shall be formed or erected within the Jurisdiction of any other State; nor any State be formed by the Junction of two or more States, or parts of States, without the Consent of the Legislatures of the States concerned as well as of the Congress.

The Congress shall have Power to dispose of and make all needful Rules and Regulations respecting the Territory or other Property belonging to the United States; and nothing in this Constitution shall be so construed as to Prejudice any Claims of the United States, or of any particular State.

Nowhere does the U.S. Constitution allow Mr. Kerry’s “borderless world” nor does it allow PROPERTY-LESS borders of this nation.

Kerry is a traitor to the Constitution and occupies the office of Secretary of State under the thumb of the illegal-alien-BHO.