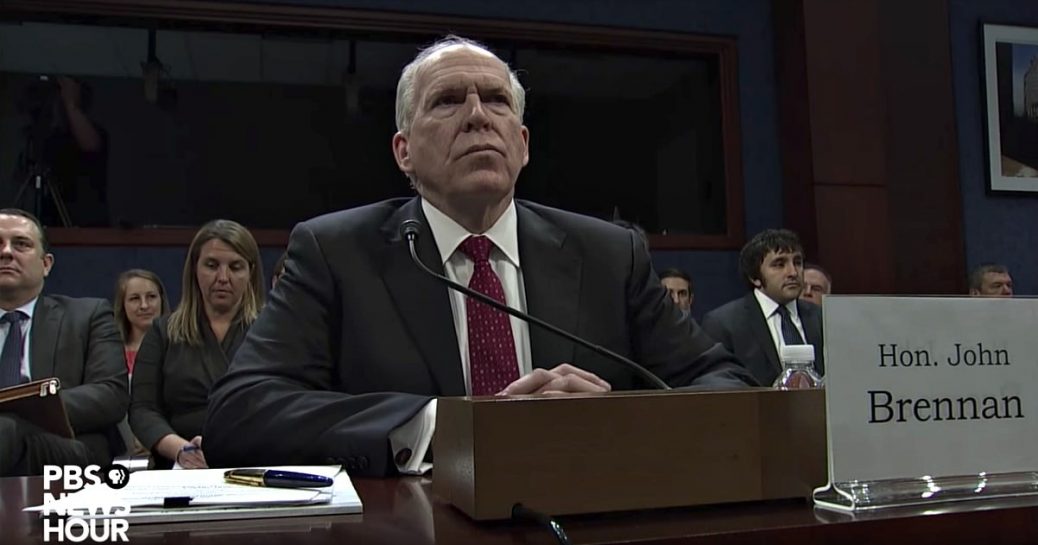 Freedom of speech is one thing, but nowhere does the First Amendment protect criminals from the consequences of their real-world traitorous actions against America and the President of the United States. As John Brennan has wailed over President Trump’s “unconstitutional” action to revoke his security clearance on August 15th, his unrestrained, untethered partisan attacks against President Trump and his willingness to weaponize intelligence to advance the Democrats’ Leftist agenda against our Republic, along with his integral role in subverting and undermining the Trump administration through illegal means, sedition and espionage, have exposed him as a traitor to America.
Former CIA Director Brennan fanned the flames of the Trump collusion story, alleging a conspiracy with the Russians, and he pushed it and the false Steele Dossier to President Obama and Senator Harry Reid (D-NV) who went on to leak it to the New York Times, even though the dossier was paid for by the Democratic Party and was clearly less than credible from the start. Such was his desire to help Hillary Clinton and retain his position under a Clinton presidency, he also teamed with British and Estonian spies using FISA warrant information to initiate a multi-agency investigation into Presidential candidate Donald Trump, while giving Susan Rice, another Hillary supporter, a pretense to spy on Trump and his aides and advisors.
John Brennan has consistently given his voice to the most radical anti-American factions of this country, along with other former intelligence officers, such as Michael Hayden, former CIA head, James Comey, former FBI director and James Clapper, former Director of National Intelligence, as they leveled the sort of attacks against the President that one often hears from Antifa. John Brennan and any ex-security official are not entitled to retain the high privilege of a U.S. security clearance, once they descend into a hostile position against the U.S. government and monetize that clearance as Brennan has, in his new position of a CNN contributor and advisor.
President Trump, in a statement read by Sarah Sanders, on August 15th 2018, said: “I have a unique constitutional responsibility to protect the nation’s classified information. … any benefits that senior officials might glean from consultations with Mr. Brennan are now outweighed by the risks posed by his erratic conduct and behavior. Historically, former heads of intelligence and law enforcement agencies have been allowed to retain access to classified information after their government service [to] consult with their successors regarding matters about which they may have special insights and as a professional courtesy. Neither of these justifications supports Mr. Brennan’s continued access to classified information … any access granted to our nation’s secrets should be in furtherance of national not personal interest.”
In light of the fact that there is no constitutional mandate for high echelon federal officials to retain their security clearances and all military and other officials lose their clearances upon leaving government employment, it is erroneous and troubling to recently see 60 former CIA officials signing a letter on August 17th in opposition to the President’s move. President Trump has the absolute right and authority to do so, and these officials seem more concerned with their own particular set of circumstances, more so than keeping state secrets from the hands of known traitors to the Constitution and the Republic, such as Brennan.
What happened to their oath to defend the Constitution against all enemies “both foreign and domestic”? If ever I’ve witnessed a domestic enemy, it is John Brennan and his cohorts and co-conspirators, whose actions violated the U.S.Constitution in a most egregious manner.
It also goes to show how deep the Deep State really runs in this country, when one hears men like Navy Admiral William McRaven, who oversaw the mission to kill Osama bin Laden, call the skunk Brennan “a man of unparallelled integrity”.
Joseph DiGenova, former U.S. Attorney for the District of Columbia, recently exclaimed: “[Brennan] is the real traitor. What he did and … said recently about the president of the United States is despicable. [Brennan] is personally responsible for the leaking of unmasked information … the sharing of false information to U.S. intelligence sources to get FISA warrants … the sharing of false information with American intelligence agencies. 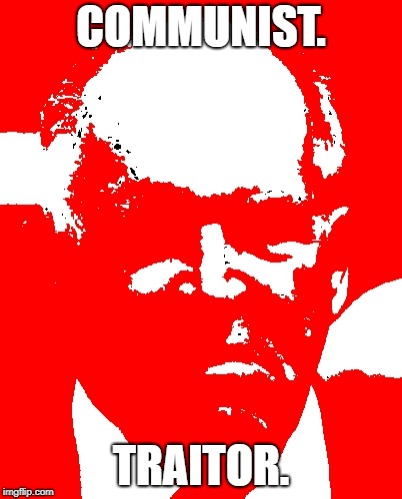 It’s worth noting that Brennan, the very man accusing President Trump of treason, voted for Gus Hall, the USA Communist Party head, for President, at the height of the Cold War in 1976, when the Soviet Union actually wanted to destroy America. He admitted as much, in a CNN interview in September of 2016 with Tal Kopan. I don’t know what anyone else calls that, but it sure looks like treason to me.
A supporter of communism, Brennan brought into the CIA a cabal of subversives and gave them plum positions from which to gather and leak political espionage on President Trump. He bastardized standards so that these left-wing activists could burrow into career positions. Under the guise of their phony professionalism, they presented their politicized judgements as “non-partisan.”
James Clapper, former DNI, has similarly accused Trump of treason, on air, but has produced no proof. If he and others are suggesting that their security clearance has allowed them to access incriminating evidence, they should say so, or shut their lying mouths
President Trump is also moving to revoke the security clearances of other Hillary Clinton supporters and Obama people at all bureaucratic levels, such as Michael Hayden (NSA), James Comey (FBI), Susan Rice, Sally Yates, Bruce Ohr, Lisa Page and Peter Strzok. President Trump told the Wall Street Journal: “I don’t trust many of those people on that list. I think that they’re very duplicitous. … they’re not good people.”
Brennan is about to be hoisted on his own petard, due to his illegal programs and domestic spying and lying to Congress and the American people, under oath on numerous occasions. Rather than being a guardian of democratic ideas and decency, he has been a miserable traitor to his oath to protect and defend the Constitution and America, and if President Trump is half the man that many believe him to be, it will be hard for Brennan to avoid going to trial, especially with documents in the hands of Congressional investigators that expose Brennan’s ringleader role in the, to date, unsuccessful attempt to derail President Trump, before and after the 2016 election. And if there’s a pound of justice left anywhere in our American system, Brennan will die in a federal prison, unless he opts to swallow a capsule of cyanide first.
Our nation can survive many catastrophes, but it cannot survive her traitors well, and John Brennan is one of them, who has brought great harm to our republic, along with his co-conspirators.  All America, the part that still loves America, must demand that Brennan be charged and prosecuted for violating numerous federal laws and his oath to the U.S. Constitution.
by Justin O Smith