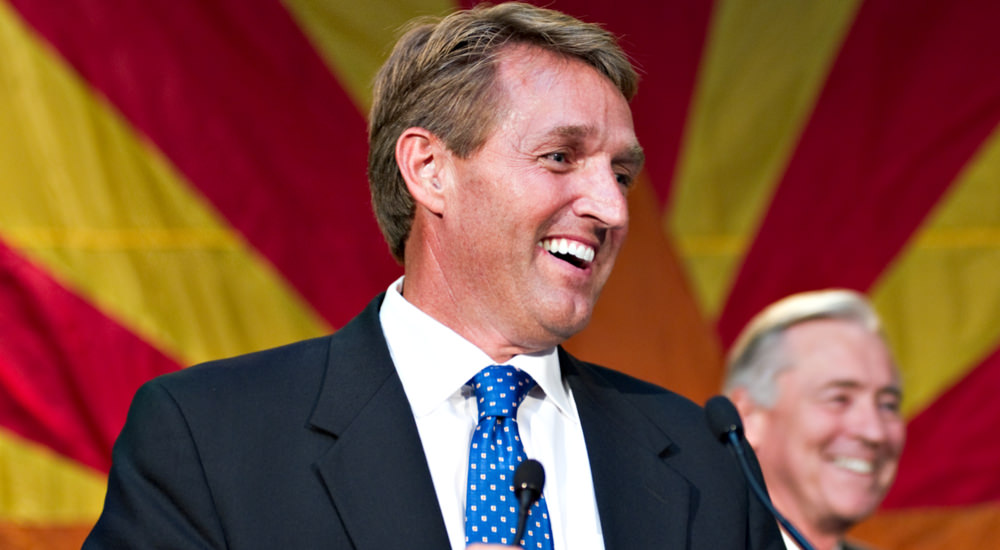 Jeff Flake’s decision that will ensure his ruinous legacy.

Senator Jeff Flake made his announcement that the vote on Judge Kavanaugh’s SCOTUS confirmation must be delayed once more because Flake had decided another FBI investigation was necessary. Flake thought he had camouflaged his infamy by his announcing he would vote for confirming Kavanaugh prior to his announcement that he required an FBI investigation to do so. Flake’s real intent is too obvious to be disguised by Flake’s juvenile attempt at camouflage. The whole dammed thing was a pre-planned attack by Flake and others to disrupt, delay or possibly destroy President Trump’s nominee for the SCOTUS, Judge Kavanaugh; it will fail.

Flake’s hatred for President Trump has been on display for two years. His mentor was John McCain. Flake’s disgraceful confirmation vote subterfuge was probably his last opportunity to exhibit that hatred. However, Flake was supported by other RINO’s like Lisa Murkowski and the damage was done.

This further treachery by Republican RINO’s aligns them with the vilest political party (Democrats) in our nation’s history. I can understand why Democrats are so hysterical that they will commit any act of deplorable disrepute imaginable to destroy Judge Kavanaugh. Democrats recognize the looming reality that a Kavanaugh confirmation will destroy their ability to control the Supreme Court for at least a generation.

Democrats continue to demonstrate their version of political insanity. They have done so since Hillary was decisively beaten in the 2016 election; they still cannot believe it. Their lunacy has only increased during the last two years and has now reached a new destructive plateau with the Kavanaugh SCOTUS confirmation process.

The country has now seen the Democrats will do anything, tell any lie, take any illegal actions, use whatever pressure, distribute money to anyone that will make whatever fabrications the Democrats crave, in order to prevent Judge Kavanaugh’s confirmation to the SCOTUS. I must believe that Americans, at least the Americans I grew up with, those I served with in our Armed Forces and the people I now know and associate with are as disgusted with the Democrat party as I am. The Democrats will pay a ruinous price in 2018 for their destructive political insanity.

On the RINO side, these are politicians who care not the kind of government their constituents want and voted for. The majority of their constituents voted for a Donald Trump presidency. Jeff Flake and the others despise President Trump. They are like a bunch of spoiled brats who didn’t get the candy they told Mom and Dad they wanted at the store and now cry, yell and stomp their feet to get attention; when the can, these RINO’s will use any subterfuge to covertly support the Democrats in order to disrupt President Trump’s agenda. The Kavanaugh confirmation vote is a textbook example.

Why did Jeff Flake and the other RINO’s demand another FBI investigation? These RINO’s absolutely knew there had already been six FBI investigations on Judge Kavanaugh, those investigations had found nothing negative to report. The RINO’s absolutely knew there was nothing for the FBI to investigate on the three and a half decades old accusations brought against Kavanaugh by Professor Ford. Professor Ford’s claims of sexual harassment lack any corroboration by any of the people she listed to support her claim. Professor Ford can’t recall any of the pertinent facts about her claim, e.g. when it took place, where it took place, what year it happened etc. Professor Ford didn’t make any accusations against Brett Kavanaugh or anyone else at the time she now says took place. Nonetheless, Flake and his cohorts in the Republican Party demanded another FBI investigation when they knew full well their phony demand had been found pointless in a past SCOTUS disgraceful Democrat sponsored witch hunt. Let’s take a walk down memory lane.

The onetime second in command of the Democrats, Joe Biden, laid out the reasons why an FBI investigation against a woman accusing a SCOTUS candidate Clarence Thomas, of sexual harassment were useless. Of course in this example, it was the Republicans who wanted the FBI to investigate Anita Hill’s accusations and the Democrats who didn’t want that investigation. Once more at that time, the Democrat party showed how little they care about truth, justice, and the American way.

Joe Biden’s comments about the Democrats and Anita Hill’s attempt to destroy a great man, Clarence Thomas:
“The next person who refers to an FBI report as being worth anything obviously doesn’t understand anything. It explicitly does not, in this case, or any other case reach conclusions, period, period.” “So when people wave an FBI report before you he continued, understand they do not, they do not reach recommendations.

So the Democrats, the deceitful RINO’s, and our corrupt legacy media know demanding another Kavanaugh investigation by the FBI, will reach no conclusions, no recommendations, it will just allow further delay, and will absolutely bring on more Democrat sponsored, unsubstantiated dishonesties by women who are receiving something, recognition, notoriety, media face time and in some cases a great deal of money for doing so. Yeah, I said money, I mean just take a look at Professor Ford’s “Go Fund Me” account. It now has over one million dollars in it and is still going up. Hope she doesn’t use any of that money to go to any more parties she doesn’t remember much about. The woman obviously needs some serious therapy.

But back to Jeff Flake; Jeff Flake was elected Senator in Arizona in 2012 as a fiscal conservative. I didn’t really know much about Flake when I voted for him. Other than Flake, my option was to vote for aleft-wingg liberal Democrat, no thank you.

Since Flake’s electio,n it has been only too obvious that Flake, is really a Flake. He has shown he is not the man he represented himself to be. He has not supported enough conservative programs in the main and is now well known as a never Trump RINO. Early this year Flake announced he was not running to retain his Senate seat. The reason for his quitting was information given to Flake by his staff. That information was his approval rating in Arizona was only 18%. Flake obviously couldn’t take being politically destroyed in his first reelection primary. Great decision Jeff, your political rating just recently was in the single digits, but after your SCOTUS treachery, it may now be much lower. I don’t think there have ever been any negative political rating scores in history Jeff, but you just might be the first to achieve one.

Jeff Flake has written a book, he named his book, “The Conscience of a Conservative.” The title for his book has now blown up in his face. His time in the Senate has proven he is no conservative and since he tries to convince all he is, he has no conscience. Flake couldn’t even come up with his own title for this book. He had to copy the title of Republican Barry Goldwater’s inspirational work, “The Conscience of a Conservative.” What a guy.

Jeff is no conservative. His time in the Senate demonstrates that. Let’s take a look at some of Flake’s record:

Flakes record demonstrates that time after time Flake has sold out conservatives on key issues. Like many Senators, Flake is just playing a game with voters. Campaigning as a conservative but voting like a liberal on far too many issues.
Flake brags about his conservativism, but the Conservative Liberty Review scores Flake at a 53%, that score is better known as an “F” just more porkies by Flake.

Senator Flake has been lying to his Arizona constituents since 2013. They have now run him out of Arizona. He campaigned has a conservative in order to be elected, but take a look at the above points, he governed as a left wing politician. Now if Flake had been elected Senator in the “Peoples Democratic Republic of Massachusetts,” he probably would be elected again I mean look at despicable John Kerry. Flake has made comments about starting his campaign for president against Donald Trump in Massachusetts in 2020; I believe that would get a lot of laughs even on the Rachel Meadow show.

Perhaps Jeff Flake’s last act of disrepute occurred on television last week. The soft-ball question host finally asked Flake an interesting question. The question was, “if you were running for reelection this year, would you have asked for that investigation? Flake had a little embarrassed laugh and answered, “No I wouldn’t have.” In that moment Jeff Flake showed all he is a conniving liar and should now retire from the Senate, of course, he won’t.