It’s Not About Guns 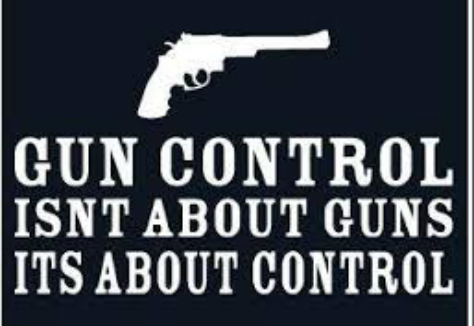 Many people, formerly myself included, think Obama is incompetent in that he thinks all he has to do to stop gun violence in the United States is to make a law against it. This ignores the fact that mass shooters obey some laws, and ignore others, in their quest to kill as many people as possible. Their favorite places to conduct their shooting sprees are “gun-free zones.” That’s because, due to laws and “policies,” they can be pretty sure there will be no guns there in the hands of law-abiding people to oppose them. Some former mass shooters have been asked about that, and have frankly told the questioner that, yes, they “search out” gun-free zones in which to do their dirty work. Proof that anti-gun laws don’t work is ample, but anti-gun fools such as Obama and Sen. Feinstein are blissfully unaware of that.

Which leads me to believe that it’s not political incompetence at work here, but a devious PLAN to disarm as many Americans as possible to make it easier for ILLEGALLY-armed criminals and Islamic terrorists (being imported by the thousands on our dime) to kill people, which will make it easier for them to make more and more laws, restrictive of gun ownership that only law-abiding people will obey, which will make it easier for his thugs when they come to take our property without fear of meeting a gun or guns in the hands of honest people, as they did in Texas recently, forcing them to “back off,” while they murdered one of the leaders of the opposition and put another in prison on bogus charges. People put this down to incompetence on the part of the anti-gun fools, led by Obama, but I’ve come to the conclusion that it is NOT incompetence, but part of the PLAN.

Obama is almost finished with his plan to “socialize” America, and he hopes either Hillary of Bernie will continue his work—which is why he is doing everything he can to help one of them get elected president, in his place. I think that, PRETENDING to be incompetent is an important part of his plan to destroy the free market as a “guiding force” in America so he can blame it for the troubles HE creates, and replace it with socialism. That puts any possible opposition to sleep until it’s too late. The anti-gun drive is only part of his bigger plan to make this into a socialist nation. But it is an important part of his plan. History proves that when the government is able to disarm it’s citizens, soon it is killing them in large numbers. And slavery follows. That’s what Obama is working toward, and he is very close to achieving his goals.

People are giving Donald Trump a hard time for having the temerity to “suggest” this of Obama, but he is telling it true. Those capable of effectively opposing him are still “asleep,” and are afraid to do so openly for fear of suffering the same pressure to desist as Trump is getting. If we don’t wake up to what Obama is doing and do something about it, we’re soon going to be the new “slaves to socialism.” America will be the new “Soviet Union” for the next unknowable number of years until the socialist regime predictably collapses, when they run out of money stolen from those still creating new wealth, in spite of the leeches who steal a large part of their earnings for the benefit of the “moochers.”