The Russian Figments of Liberals Imagination 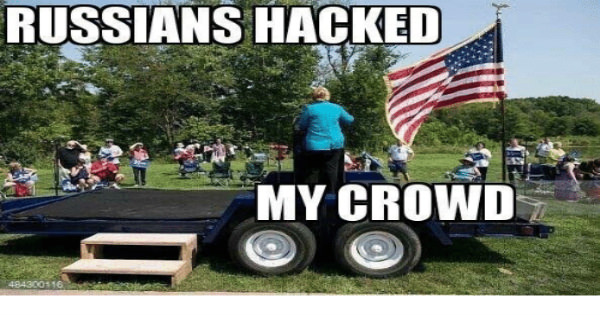 It began the night of the election when Clinton led Trump by a few hundred thousand votes and it was already clear she was doomed to electoral failure. The faces at MSNBC were longer than John Kerry’s as they reported each successive state breaking for Trump. At length, Maddow peered gloomily into the monitor and announced it wasn’t a nightmare… that we’d not wake up from this… that it was REAL.

The moment it became clear their golden girl was doomed the mainstream media began pointing at the popular vote totals. They blamed the electoral college, racism and sexism. They blamed Islamophobia, and homophobia and fake news. They blamed ignorant hillbillies, lazy non-voters and Wikileaks. They blamed third-party candidates, Bernie Sanders, fraudulent voting, and James Comey.

Between the mainstream media, the lame-duck liberals, pop culture and the Hollyweird elite, they blamed everything but clam chowder. Well, in addition to clam chowder, they also avoided casting blame on those actually responsible for the shellacking Democrats endured. In keeping with long-standing tradition, few liberals take any responsibility, whatsoever, for anything, ever.

Obama took some responsibility BEFORE the election. On the pre-election campaign trail, when Hillary lead some polls by double digits, Obama at once, exalted and chided blacks. He even stated that if they didn’t vote and Hillary didn’t win it would be a slap in the face to his (Obama’s) legacy, an indictment of his policies.

Are you hearing that now? Is Obama accepting responsibility for the nationwide avalanche of Democrat defeat? Cupping my ear… nope. Has he acknowledged Obamacare is a disaster, the middle-east is in flames, the economy is limping like a scooter with a flat tire? The Russians did it! They hacked the election!

Even when Hillary was up by 8 points in their own distorted polls, the mainstream media was pounding on Hillary for running a crappy campaign. Still, as almost daily the “new media” broke stories highlighting crooked Hillary’s ethical transgressions, direct from her own emails, the mainstream media devoted 20 seconds to that and four minutes to the latest Trump gaff.

Do you hear the Democrats mention Hillary’s anemic performance as SecState? Or her support for partial-birth abortion? Her disdain for the first and second amendments? Do you hear Democrats mention her bland and uninspiring campaign? Do you hear them point out her dismal poll numbers with respect to honesty? Trust? Likability? You may have heard them mention, in passing, the way she entirely ignored middle America. That’s about it.

No, it wasn’t Hillary, it was the Russians. It wasn’t the slippery-slope policies of the Democratic party dragging the nation into chaos. It wasn’t the racial divide fostered and festered by the media and the Democrats over the last seven years. It wasn’t the horrifying thought of Eric Holder or Loretta Lynch on the supreme court. It wasn’t a chief-of-staff with direct ties to the Muslim Brotherhood. It wasn’t open borders, submission to the UN, or Iran with a nuke. It wasn’t Hillary’s incipient urging of women to vote for her because she has a vagina. It wasn’t her hard left turn to woo Bernie acolytes. It wasn’t an ever-more intrusive government trading ever more free stuff for ever more clueless votes.

Do you hear them calling for democratic Juries? If the popular vote is all that matters, why does it take 12 members of a jury to convict a rapist? Why not seven? Why can’t the constitution be amended to impose term limits on entrenched politicians by a simple majority?

But I digress. While they continue to emulate their 12-year old “Gore won” mantra, they’ve brought in a whole new batch of excuses that have everything to do with delegitimizing and weakening Trump and nothing whatever to do with why they took an acid bath.

So let’s take a closer look at their battle cry; “The Russians Hacked The Election!” So what? Even if it’s true, so what? Obama took a much more active role in “hacking” the election of Netanyahu. He sent covert operatives to Israel and gave Netanyahu’s opponents $350,000 in an attempt to unseat him. Like virtually everything Obama tried, that little escapade failed, so he stabbed the man in the back on his way out the Whitehouse door.

And now he’s climbing aboard his high horse and whining because the Russians may have followed his lead. Worse still, he imposes sanctions (that will surely be short-lived) reminiscent of a drunken judge fining a pedestrian for carrying an open container.

Maybe they did hack the DNC. Maybe they did facilitate the release of TRUTHFUL embarrassments to Hillary. Maybe they do prefer Trump over Hillary. Who cares? Even if it’s eventually proven true, those responsible for Hillary’s spectacular flame-out are not the Russians, the electoral college, the “stupidity of the American voter”, racists, homophobes, xenophobes, or anyone other than Hillary, the Democrats, and Obama himself.

Personally, I hope they continue to dig head-holes in the sand; continue to blame everything but their failed liberal policies. Nothing would please me more than to see them permanently exiled to New York City and Los Angeles. Incidentally, deduct EITHER of those two counties, and she loses the popular vote by 400,000. She lost, Obama. She lost, Hollyweird.  She lost, pop-culture. She lost, snowflakes. Grow up, buttercup.