Islam and the Foolishness of Liberal Ideology 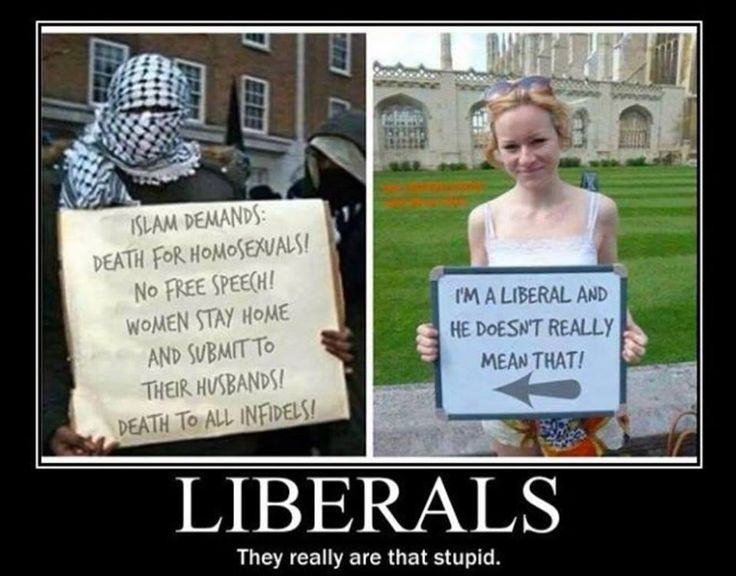 We have just seen that a terrorist attack was perpetrated by a Muslim in France. The two extreme ideological reactions to such terrorist attacks are usually to either excuse the attackers or play their actions down (if you are a radical progressive liberal) or to demand action against all Muslims (if you are a radical conservative). Both actions are extreme and both grounded in ideology. The one thing that ideologues never do however, is properly research or examine an issue on its own. Everything is colored by their ideological perspective.

Unfortunately in Europe and other western countries, the liberals and other bleeding hearts have done everything in their power to enable the Islamization of the west, primarily because they hate their Judeo-Christian historical roots. They see Muslims as ‘victims,’ and we must help ‘victims.’ On the (extreme) other hand, there is a faction of society which fears Muslims to the extent that they see every Muslim as a terrorist. In their hatred for what Muslims represent, they make of Muslims even greater victims.

Society is then divided between those who effectively become enablers of Islam in the West and those who wish to go to war with Islam and every Muslim they encounter. We could argue the merits of both sides of this divide, but I believe that without the input of the former, the input of the latter would be missing.

I recently published an article called ‘Useful Idiots and Islam‘ in which I asked the question: “Why is it that you refuse to believe that Islam – the political religion – is not a threat to your country, simply because Muslims are nice people? If Muslims posed no threat to anyone, they wouldn’t be at war with each other in their home countries.”

The liberal or PC ideology sees Muslims as victims and so the ideological army is mobilized to help, to comfort and to support said ‘victims.’ It is interesting to note that the same liberals tend to be derisive of Evangelical Christianity, and it is in the demonstration of these two extreme viewpoints that one can find the hypocrisy in constantly supporting, fostering and encouraging Islam in the west. Here is a quote from the article listed above:

With regard to those Muslims who wish to see our secular societies submit to Allah, they are essentially the same as any Evangelical Fundamentalist (of whatever denomination). As much as we might permit Evangelicals to stand on the street corner preaching their individual brand of religion, we generally ignore them and distance ourselves from these religious nuts. What we do not do however, is do everything in our power to support them, and everything possible to shut down those who are opposed to their beliefs.

But when it comes to Islam, the Useful Idiots walk a different path. For the sake of a political ideology, (PC and Multiculturalism) they support the Muslims. So brain dead are they, that they fail to understand that an Orthodox Muslim has more in common with an Evangelical Fundamentalist, than they do with us – the secular Western godless sinners. If you don’t believe this, then please answer the following questions:

# On the issue of homosexuality, what is the difference between the Orthodox Muslim and the Evangelical Fundamentalist?

# On the issue of the man being the ‘head of the house,’ how do these two groups differ?

# On the issue of ‘hell and damnation’ for non-believers, how do these two groups differ?

# On the issue of female attire and modesty, how do these two groups differ?

# On the issue of alcohol consumption, how do they differ?

# On the issue of pornography, how do they differ?

# On the issue of blasphemy, how do they differ?

# And finally, do not both groups look forward to the day when God’s judgment will fall on the unbeliever and the ‘saved’ will enter Paradise?

So tell me: “Do you offer the same public support to Evangelical Fundamentalists as you do to Muslims?”

Useful Idiots, who constantly defend Muslims whilst ridiculing Christians, cannot see their hypocrisy because to them it is not hypocrisy. They are just standing up for ‘human rights and multiculturalism.’ They are being good citizens.

Conservatives have for a long time tried to battle the liberals and their support for Islam / Muslims. That battle has been misguided because ideological fanatics simply to do not listen to opposing ideologies. To win the battle against western secular and ideological fanatics seeking to Islamize the west, the best weapon is to support the tenets of Islam which are in opposition to the tenets of Liberalism, and to do so by linking Islam to Evangelical Christianity.

The foundational base of progressive liberalism is Marxism and the ultimate goal of Marxism is the submission of society to the state. Interestingly enough, Islam means ‘submission to Allah.’

Progressive Liberals want nothing to do with God. To effectively fight them in their constant promotion of Islam, one only has to show them that their actions support the dictates of Islam and thankfully will lead to the destruction of the ‘godless.’