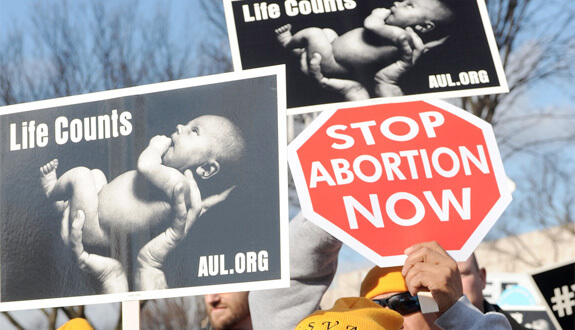 The election of Donald Trump as the country’s 45th president has arguably brought out the worst of the Left. One example is this past Saturday’s marches, rallies and protests throughout major cities, carried out by feminists vehemently opposing Trump, especially on the issue of abortion. Women were wearing vulgar costumes resembling female private anatomical parts, holding profanity-laced signs, shouting profanities, and taking part in violent altercations, such as setting someone’s hair on fire. But, as the Left never learns, these demonstrations just make them look insane.

However, the end to this story was almost as ironic as it was funny. On Monday, the day after the 44th anniversary of Roe v. Wade, the Supreme Court decision legalizing abortion nationwide, and two days after these riots started, President Trump signed an executive order reinstating the Mexico City Policy, which restricts federal funding for abortions overseas. The act was originally enacted by President Ronald Reagan in 1984, and reinstated by Trump after President Barack Obama’s rescinding the act in early 2009. According to LifeNews, the policy covered over $400 million in federal funds, part of which went to International Planned Parenthood and Marie Stopes International, both large abortion providers.

Trump’s order was lauded by the pro-life movement and by taxpayers that do not want their money being spent on abortions. House Speaker Paul Ryan praised the executive order, stating that “President Trump is wasting no time acting on his promises. He has renewed President Reagan’s policy to ensure American taxpayers are not forced to subsidize abortions anywhere in the world.” White House Press Secretary Sean Spicer told reporters, “I think the president, it’s no secret, has made it very clear that he’s a pro-life president.”

Naturally, this move by Trump was met with ire from the Left. For example, California Junior Senator Kamala Harris tweeted a picture of Trump, Vice President Mike Pence, and some of Trump’s male advisors, and stated “This group just made it more difficult for women to get access to healthcare worldwide. You tell me what’s wrong with this picture.”

What’s wrong with it is the tweet itself. Harris operates under the Leftist premise that every woman is pro-choice, and that abortion constitutes healthcare, where in fact it actually constitutes the exact opposite—murdering a baby in the womb. It’s a very mistaken premise to assume that all women are pro-choice, and to assume that men are actively trying to institute a patriarchy by purposely limiting women’s healthcare access. There is absolutely no evidence for either of these notions. It’s just a normal scare tactic of the Left.

But put aside the debate whether abortion is murder or not for a moment. Should taxpayers have to pay for abortions? Absolutely not. No one should not have to suffer the consequences of someone else’s mistake of having unprotected sex, just like that person shouldn’t have to pay for anyone else’s irresponsible behavior in any capacity. But funding overseas abortions is an even more egregious practice. We have absolutely no obligation to send money to countries for reasons that have nothing to do with US interests.

But above all, it’s unconstitutional to tax in order to fund abortions within the US and abroad, and there is no reason to publicly fund a private company such as Planned Parenthood, which has been caught selling aborted baby parts.

This move by Trump is not the end-all for the pro-life movement, but it is a great start. And the timing of the move could not have been more fitting.