IRONY: ISIS Bans the Burqa Due to Terrorism! 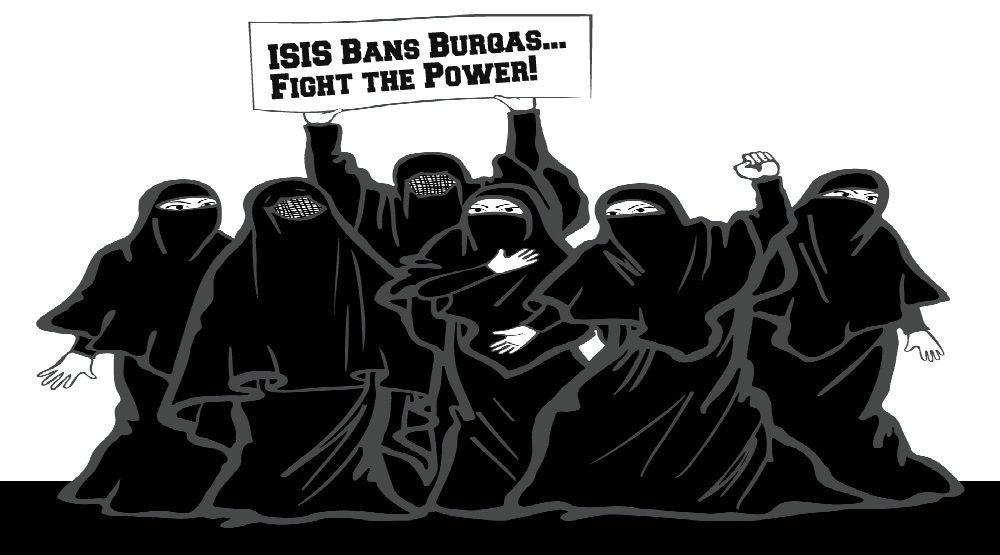 Scroll down for Audio Version

I have never been a fan of the burqa – the black shroud, or long, flowing garment that covers entirely the Islamic woman from head to toe. Often the only things that can be seen are the eyes, and frequently not even them.

Imagine having to deal with 90° to over 100° heat – being forced to don a full body burqa, made entirely of black fabric during the summer we just experienced. Seems like torture.

To me, it is a freedom thing. Within reason, one should be able to wear whatever one wants. But then there is the real world threat of terrorism. Because of these threats, France, Belgium and the Netherlands have already banned the wearing of the burqa and niqab in public places and violators can face fines and even jail time.

It’s fascinating to see these anything-goes, overly tolerant European nations begin to crack down on their own liberal policies. The Europeans have a reputation of tolerance and succumbing to political correctness – which is how they ended with the mess they are currently in – allowing so many unvetted Muslims into their countries.

Here in America, whenever such a ban is even hinted at, groups like the ACLU and CAIR, the Muslim Brotherhood front group, whine like stuck pigs. They claim it is a matter of “religious observance and practice.” Sure it is. They are wearing the burqa because they want to. That’s why, after a region in Syria was liberated from ISIS control, women were seen burning their burqas.

I have always thought it extremely oppressive for the male in Islam to dictate every aspect of a woman’s life, down the mode of dress. Given the opportunity, I believe Muslim women would be happy to trash the niqab and burqa. Sadly in Muslim controlled

countries this will never be. Well – not quite.

It is astonishing how quickly people change their tunes when it is they who have to suddenly contend with terrorism.

In an ironic and delightful turn of events, the women of the Islamic State, ISIS, are being ordered to stop wearing the full body frock. Yes, the most radical and adherent of the Islamic world, ISIS, has decreed that women will no longer be allowed to wear the burqa or niqab “at security centers in the northern Iraqi city of Mosul despite harsh enforcement of a law requiring them to be worn.”

Women who have been beaten and killed over improper dress in the Islamic State are now being told to take it off – take it all off. It’s stranger than fiction.

And what brought this on? Well, in an ironic twist of fate, it seems that several ISIS commanders were murdered by women wearing full body covering at a security point in Mosul. I’m sure one could hide any number of weapons under those garments. So I guess ISIS can dish it out but evidently can’t take it.

Lest you think that ISIS has turned over a new leaf, women are still required to wear the burqa in all other ISIS controlled areas. But, as Jihad Watch puts it: “It is truly a weird world in which the Islamic State demonstrates common sense and even a certain quality of honesty deluded Westerners lack.”