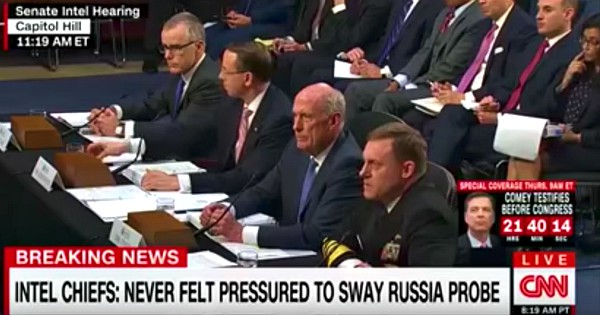 NSA Director Mike Rodgers and Director of National Intelligence Dan Coats both testified before Congress this morning, and both men unequivocally told Congress that President Trump has “NEVER” tried to pressure them on their investigations.

Rodgers told the Senate Intelligence Committee: “In the three-plus years that I have been director of the national security agency, I have never been directed to do anything I believe to be illegal, immoral, unethical or inappropriate and to the best of my recollection during that same period of service I do not recall ever feeling pressured to do so.”

And Coats echoed those sentiments: “I have never felt pressured to interfere or intervene in shaping intelligence in any way.”

By the way Democrat Senator Mark Warner (D-VA) was not at all happy with the testimony from either man and he proved it when he decided to badger Admiral Rodgers for not condemning President Trump.