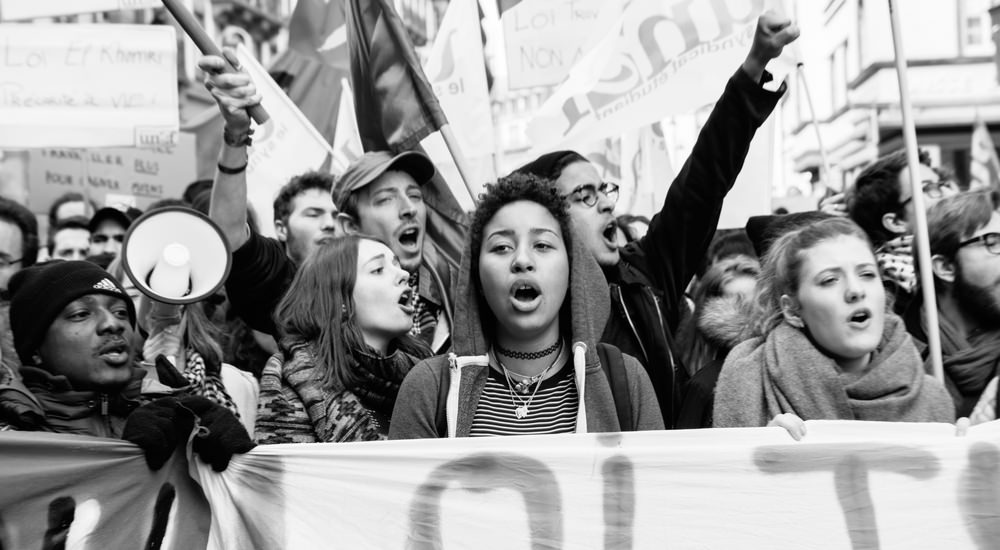 The Left declared war on Yehovah and His children as far back as 1789.

For better than two centuries they’ve had victory after victory against God’s people by using a multi-front approach; by using, for example, a two-steps forward, one step back tactic that outraged the populace by doing something outrageous, then seeming to retreat, but only half as far as their progress had taken them.

But, Year of Jubilee 1966-67 proved to be the year Yehovah ran out of His long-suffering patience and answered the Left at long last. That year, while hippies with flowers in their hair made love in San Francisco, the Israelis whipped the entire Egyptian, Jordanian, and Syrian armies–forces well stocked and supplied by the atheist Soviet Union–in SIX DAYS. (And on the Seventh Day, they rested from their labor and left their enemies a smoldering ruin.)

Following the Left’s rampage through the streets of Chicago and other cities, and the violence they unleashed, the threats, the anti-Christian, anti-Jewish, and anti-American rhetoric, Yehovah responded by unleashing the Holy Spirit to foment a counter-counterrevolution in the form of a predominantly North American revival.

Former hippies gave their lives to Christ by the MILLIONS. They cut their hair, tossed their drugs, and traded their Thoughts of Mao for the Bible. Throughout the 70s and 80s, their influence grew until their numbers affected the body politic. Jerry Falwell and Pat Robertson became household names.

But, wars do ebb and flow, and the 90s saw a retrenchment of the so-called Judeo-Christian Right. The Left ascended with Bill Clinton in the White House, children learned about cigars and blue dresses, and the children of the Jesus People of the 70s entered college and were taught that “science disproved the Bible” (One of those prevailing myths spread by people that believe in magic but call it science).

We thought George W. Bush was the anti-venom to counter the snakes in the garden, but we were wrong. Skull and Bones, globalism, and a New World Order was the order of the day as the Deep State pretended to believe in the United States as founded but worked behind the scenes to disarm the population and erase our borders to allow mass migration for the sole purpose of destroying the American Middle Class, our jobs, and our way of life. Global government would be imposed by force, if necessary.

In 2008, a curmudgeon ran for president, not because he was the man of the hour chosen by Yehovah to lead this nation back to the promised land, but because it was his turn, and white flag Republicans are nothing if not consistent about following precedent.<

So, for the next eight years we had the Imam-in-Chief. Our first Muslim president, our first quasi-dictator that ruled by his pen and his phone. And his fellow travelers on the Left were down with the struggle. Laws they didn’t like, they didn’t enforce. And laws Congress refused to pass, they imposed by administrative and judicial fiat.

The Imam promised his troops that he would transform America into Venezuela by opening borders and importing a foreign occupation army the Fakestream Media called “refugees”.

After eight years, to quote Kyle Reese in the movie Terminator, “We were THAT close to going out forever.”

All that was needed was one more election. Win that and they’d do away with elections altogether. The Left was on the verge of total victory against the United States of America as founded. Hillary was a guarantee. She would pursue the Imam’s policies with unrestrained zeal until every statue from American history was toppled and replaced by statues of Marx, Engels, Lenin, Stalin, Gorbachev, Fidel, Che, and Mao.

The Communist plot to overthrow America by capturing the minds of the Baby Boom generation would be completed and socialism would make everyone equally poor (except the American nomenklatura, of course.)

But, in the Year of Jubilee 2016-17, a funny thing happened on the way to a worker’s paradise, Yehovah choose Donald Trump to be our champion, and while the Philistines laughed and mocked, The Donald chose five smooth stones and a sling and went into battle against political giants determined to make us their slaves.

But, Yehovah’s invisible hand stirred the nation’s electorate, and Trump defeated the last best hope of Marxist-Leninists nationwide. Naturally, the Left went INSANE. Try as they might, and they will continue to try until they have spent themselves like the men of the city spent themselves trying to find the door to Lot’s house, they will FAIL.

Their failure should lead at least some of them to repentance. Most, however, are given over to a reprobate mind, and as a result, they are strongly deluded and will die believing a lie.

At least for some of them, they will recover like the demoniac in the tombs, so that by the time Trump is reelected, we will see some of the Left (at least) clothed and in their right mind.

The advice I give to my children is: Be an Eloi among the Morlocks. Ignore the screams, tune out the hate, and always live the life God gave you to the fullest. Life, Liberty, and the Pursuit of Happiness are our inalienable rights.