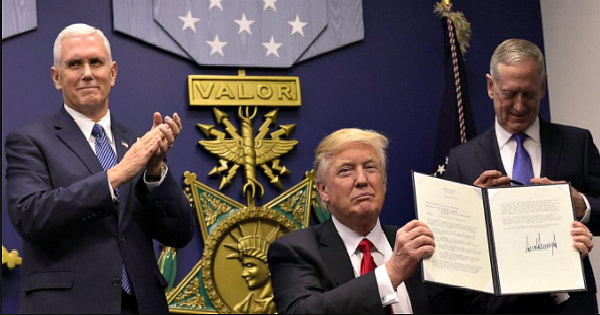 I can be critical of Donald Trump because I’m fair. When he does well (and in a short time, he’s done more to help America than Barack Obama did in eight years), I praise his actions. When he messes up, I’ll call him out. As a Federalist, the ability to assess appropriately is important. The same cannot be said about a vast majority in leadership or media roles on the left. Trump has them completely unhinged and their arguments are starting to betray the reality that they don’t think about subjects beyond the surface emotional response.

Attacks against Trump’s so-called “Muslim ban” have been a mixed bag. There are some valid complaints coming mostly from the right; the countries banned have had zero immigrants commit fatal acts of terrorism on U.S. soil while countries like Saudi Arabia, Egypt, and Afghanistan are conspicuously left off the list. However, the majority of complaints have been extremely hypocritical. Let’s look at some.

To be fair, this is actually a potentially true statement. Why would I call it hypocritical? Because it goes against their standard “religion of peace” narrative. In many ways, it makes the case for Trump’s ban. If Americans are in danger because radical Islamists will be more likely to attack them now that the ban is in place, why would we argue for bringing them into the United States? The left’s argument is basically saying that radical Islamists are a danger to Americans if we keep them out of the country, but if we let them in they’ll be less likely to commit the terrorist acts they are currently committing abroad.

If that sounds ludicrous, you’ve gone beyond the surface emotional reaction and started thinking about the situation thoroughly. Congratulations. You’re probably not a liberal.

“President Obama wouldn’t have done such a thing”

Folks, this is the real world. There are circumstances that demand actions that won’t be popular with everyone. Part of being a sovereign nation and continuing to exist involves making those tough decisions. President Trump isn’t the first to make such a decision and won’t be the last.

“The American people don’t want this”

This isn’t something that Trump pulled out of his hat to shock everyone. He’s been talking about this in different forms for over a year. If anything, this is more aligned with the Cruz/Paul recommendations when they were on the campaign trail instead of Trump’s initial policy proposal of a total temporary Muslim ban.

Americans knew Trump intended to do this and they voted him into the White House anyway. Did they think he was bluffing? Were the convinced that he was just a standard politician who makes promises on the campaign trail only to backtrack once he’s in office? On that last point, time will tell, but in these early days he’s been doing exactly what he said he was going to do.

Moreover, this politically incorrect perspective on immigration is one that allows for a vocal opposition, but it’s very likely a popular concept. While there’s no way to test the theory, I would say it’s a likelihood that deep down a majority of Americans want some variation of dramatically improved vetting to occur to prevent potential terrorists from entering the country.

Fortunately, the law doesn’t operate through social media and judges don’t refer to Wikipedia. We will, in the coming weeks, find out just how legal and constitutional Trump’s executive order really is. I won’t be shocked if it’s struck down entirely nor would I be shocked if it’s vindicated in court. That’s the unfortunate nature of our federal legal system. Activist judges are everywhere, so the legality and/or constitutionality of the executive order will be determined more by who hears the case rather than whether or not it’s valid.

This brings me to a minor conspiracy theory. I’d like to believe that the administration is generally competent. With that said, this roll out has been exceedingly sloppy:

To call it amateur would be giving it too much credit. They announced on Holocaust Remembrance Day, an event notorious for the last time people were killed after being denied as refugees by America. Staff at airports were confused and often misinformed. Known positive contributors from interpreters helping U.S. armed services to scientists invited for medical research were turned away. The administration’s legal department embarrassed itself by being unprepared. The optics were the worst to come from the White House since Benghazi.

Conspiracy theory: What if Trump wants this executive order to be shot down in the courts or restricted by Congress so he can rally his base and begin the process of consolidating power to the executive branch? Okay, so it’s much more likely that they simply rushed it all through and made mistakes along the way, but to dismiss Trump’s ability to control situations and spin them to his favor would be a huge mistake. All I’m saying is that it’s possible this is an immaculately designed ploy. We’ll leave it at that.

“World leaders are against it”

Of all the silly liberal arguments against the executive order, this is my favorite. It’s even better when they invoke that the U.N. is against it. To those who make this argument, I have one word for you: “Good.”

We’ve done enough interfering in the rest of the world and we’ve received plenty of interference as a result. If there’s one aspect of Trump’s ideology that I embrace, it’s that the globalist mentality must be addressed appropriately. We are a sovereign nation. How we defend our borders and protect our citizens is our business.

That’s not to say that the world’s opinion is irrelevant. We are the centerpiece of the world economy which means that we need free trade just as badly as they need us to freely trade with them. However, this is a security issue. It should be very tightly handled between us, the nations on the list, and nations that are directly affected by our actions.

“Other nations don’t ban based upon nation of origin”

The United States isn’t banned by other countries because they need our money. That’s it. Do you think that if we weren’t an important part of their economies that they wouldn’t ban us? To answer that question, we simply need to look at Israel.

There are 16 nations that ban entry from anyone with an Israeli passport. Let’s be clear: Israeli terrorists do not go around the world committing acts of terrorism like radical Islamic terrorists often do. It’s just not part of their standard operating procedure. It should be noted that of the seven countries on Trump’s list, Somalia is the only one that doesn’t ban Israelis.

Trump’s executive order has problems, but not the ones you’re hearing from mainstream media or liberal politicians. The echo chamber of leftist anti-Trump dissent is falling further into hypocrisy. It’s getting to the point that their messages are being drowned out by the laughter of those hearing them.