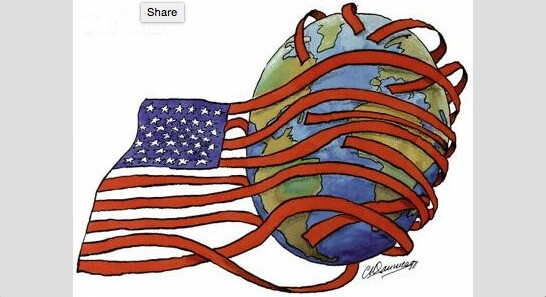 In 2004, Colonel Dale Eikmeier who served on the US Central Command Counter Terrorism team pointed out rather bluntly and honestly that the “War on Terrorism” wasn’t a fully coherent process. He wisely pointed out that terror itself is not a movement, nor is a terrorist necessarily a member of some infiltrating faction. I have often personally tried to explain this fact to others with no success. If you are following the political Party hoop-la and the information marketing of the evening news, then you have no idea what’s really going on in the world or in your own nation, as all news is politically sanitized before release. By the way, “Terror” has always been present in this world.

Why does Colonel Eikmeier have such a realistic negative opinion of our recent and current counter-terrorism activity? Well, it’s very simple; look at the results over the last decade regardless of the hype and pompous intellectual political correctness. Even Donald Rumsfeld as well as Major General Laich, in 2004, was having great anxiety and doubt over the developing situation with Islamic proliferation. Both questioned the coherency of our counter-terrorism activity before multiple professional government bodies and deemed it to be rather ineffective. Realistically, all these professional leaders were being very conservative in their estimation of the failure and thus covered the realities of their discoveries with a softened, less accusing indictment. They were speaking against forces within their own government circles who knew full well what the real goals were.

In brief the “Iraqi Freedom” operation was nothing but a ruse to disguise a regime change and a deal made with the Sunni Muslims to allow US control over the indigenous oil available. The proof of this accusation is found in the social/political results and the resistance of the Iraqi people to that end result. Just prior to ISIS’s sudden appearance, the Iraqi people were organizing resistance against the disingenuous results of the US intervention which not only seized their oil, but also destroyed much of their infrastructure and caused the deaths of thousands of innocent citizens. The subsequent effect of ISIS has been to eliminate this resistance by simply killing its members, assuring Sunni dominance and US/OPEC control over the oil production and sale. This reveals the fact of an intentional Regime change that was premeditated and executed.

Since the cessation of major US military activity at the end of the Iraqi Freedom mission, countless mosques in northern Iraq supporting violent factions have appeared. Removing Sadam was necessary for this event to take place, as he inhibited the growth of these Jihad factions. Even before the war began, Col. Eikmeier noted that a Qatar-based Al-Jazeera satellite was set up to operate throughout Iraq as if our intelligence branches were totally unaware of this development. That is highly unlikely in this modern age. Subversive communication capability is a Primary Intelligence Factor among military and government SIGINT & IMAGINT Counter Intel units. With sophisticated US jamming and communications intelligence, it would have been quite impossible to maintain such a network without complicity. The profound end result of Iraqi Freedom was the unleashing of Islamic Jihad on the world, creating a refugee crisis in order to aid that agenda, which had now found its way to the US.

Not only were our over-seas contingencies failing to arrest the stated threat, at the same time the Islamist were infiltrating our own government creating an even more complex situation. If you recall, the plan was to keep the fight over there, so to speak. It would seem that the intelligent design of the 1400 yr. old Islamist insurgency was not completely understood to be an actual “political insurgency” by our military, rather than just a selective geographic terror plot to destabilize those who the Islamist deemed an enemy, with bombs and AK-47s. Colonel Eckmeier understood this as many other past and recent military leaders have. However, their warnings were not heeded and in fact were squelched. The military had ignorantly been used in a major hostile Corporate seizure which has since developed into a full scale price war that has incapacitated the US domestic oil production and nearly economically destroyed a few other nations’ economies.

To further analyze Col. Eckmeier’s position reveals some very dire truths that should concern every American who would like to keep America stable and prosperous. As one trained in Counter Insurgency in the USMC, I can identify with the Colonel’s reasoning due to the following absolute factors of operation, with specific reference to defending one’s nation, if you actually plan to be successful. Failure isn’t an option when you understand the consequences. These factors apply to the defense of any political and social system against subversion and infiltration.

Incoherence exist when strict discipline is not given to planning and decision making based on these factors: Detailed threat analysis of your adversary, the threat of penetrations within your own ranks, learning adversary objectives, understanding their strategies and goals. After these primary absolutes are followed; the next set of absolutes is effect and tactical advantage. Many years ago real military, political and government level leaders had these necessary skills, but unfortunately, these skills have been replaced by corporate political strategies which are more concerned for the growth of the organization of Global Corporate government more than the security and prosperity of the people of the nation. As such, our military has been utilized as a corporate tool to collect assets and remove threats to the corporate goals. This fact has left the door wide open for infiltration and/or penetration of our social/political systems within the nation. Thus, the Islamist has taken the initiative to fill the void.

There are three enlightening and profound facts that solidify both the failure presented and the dual penetrations within our government and they are: the policies that are currently emanating from Washington DC; the intellectual obfuscation that is intentionally utilized by the political correct crowd to cover their ignorance of the entire issue; and the fact that every time a military officer like Col. Ekmier warns or challenges the bureaucracy, they are subsequently, retired, incriminated and/or fired. Behind the incoherent crowd of intellectual morons is a real subversive thinking machine that is completely aware of what is happening using the facade of mass political correctness, fictional elected representation and government dependency to cover its sinister goals. We must explain that the political correct crowd includes approximately 99% of the elected body in this nation who have been slow cooked for years by social engineered politics and care more for their salaries and comforts than the stability of the society. Yes, many of them are ignorantly incoherent, but largely due to willful self-centered lifestyles and personal goals.

In further analysis of the so named “Global War on Terrorism,” we see two more negative and disturbing trends that truly define what the real war is. First, we have the ongoing instigations led by the US to destabilize several nations, one after another, actually invigorating the Islamic Jihad. Secondly, we have the policies of post 9/11 which strangely support Islamic proliferation in the US and create social agitations giving rise to dissidence and the “Domestic Terrorist” label. Both of these components have one common and threatening factor. The effects of these components directly create untold collateral and direct damage to the people of the affected nations, furthering the goals of globalist corporations. Thus, it is revealed that the incoherency of understanding the condition is shared by ignorant, go along to get along politicians, poorly trained military leaders and politically active citizens who really have no idea what they are dealing with. We have become a nation of clueless victims who will not listen to wise counsel, uphold wise leadership nor defend our nation against evil aggression.

It would be prudent, if possible, at his point to analyze the social/political resistance to the subversion we are experiencing. However, the only real resistance lies in three ineffective activities at this time: the over-zealous militia response, constant reporting of the unfolding subversion and the typical political activism which intends to write legislation and vote their way out of harm. We are inundated with these folks. Any professional strategist military or otherwise would sneer or disregard such foolishness due to recognizing the real nature of the threats we face. They are complex political/social dynamics with occasional violent trimmings which make up “Political Insurgency”.

There is one factor that should be mentioned briefly, but like most realistic offerings, it will be disregarded by most. In our counter intelligence fields, our operators are taught to self-examine and put force protection as a priority. What this means for us is that if we have “patriot leaders” and/or conservative representatives that are enticing people to stay within the engineered norms of social politics, or to the other extreme, force an un-strategized face-off with the regime, then these so called leaders aren’t leaders at all; they are inhibitors and have become a liability to us all. Whether or not these inhibitors are intentional or ignorant is irrelevant. Emotions and lust for attention often cloud judgment in these matters leading to a systemic incoherent state of confusion.

Regardless of whether it’s globalist or Islamist, both of these politically insurgent systems are absolutely intolerant of any other social and/or political conviction, are without remorse and normal human dignities, nor do they adhere to any belief in personal freedoms of any kind. You simply can’t legislate around them nor vote their agenda out of being. This is a war, no different than a scenario where masses of troops are assaulting your nation with machine guns and bombs. The only exception is they are using their minds, politics, religion and the natural human depravity which includes cowards and engineered ignorance. This is a war of obfuscation, diversion, confusion and literally, cloak and dagger. The truth is always present, but not always seen.

If traditional Americans plan to keep any semblance of liberty and safety for themselves and families, they had better rise out of the incoherency which has infected general politics and corrupted social narratives; for the enemy of soul and nation will give no reprieve for the mentally weak and the willfully ignorant.