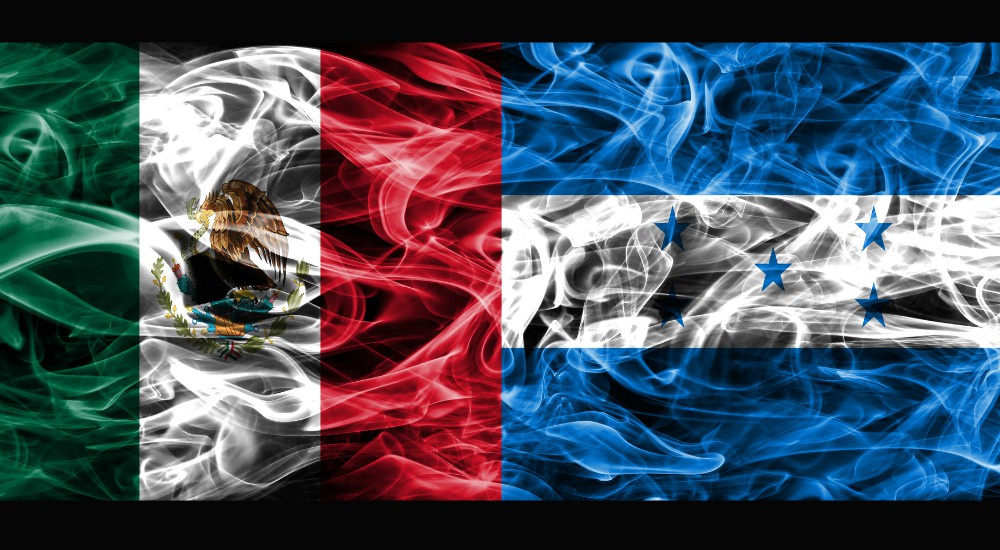 Coming to America Waving Honduran and Mexican Flags, while THEY BURN THE AMERICAN FLAG because somehow they have arrived at the conclusion America is “a fascist nation”, and yet they continue marching towards America, as they vow to cross our border.

WHY ARE THEY COMING IF THEY HATE US SO MUCH? … TO PILLAGE AND PLUNDER!!!

… YEA … They’ve made a mess of their nations, just like hungry locusts ravage a wheat field, and now they want to bring their mess here and cart away as many of our resources, cash and benefits as they can … bringing their gangs and their drugs and whores and all the immoral ways that already exist here in too much abundance.

[“Central American migrants making their way to the U.S. in a large caravan wave a Mexican flag as they arrive to Tapachula, Mexico, after a truck driver gave them a free ride, Sunday, Oct. 21, 2018. Despite Mexican efforts to stop them at the Guatemala-Mexico border, about 5,000 Central American migrants resumed their advance toward the U.S. border Sunday in southern Mexico.

Can We not block their entry? Can We not say “NO — HELL NO — We Don’t Want the Cast Offs of Honduras and Mexico Who WOULD NOT FIGHT TO MAKE THEIR NATIONS BETTER. WE DO NOT WANT OR NEED ANOTHER WAVE OF UNEDUCATED ILLITERATE PEOPLE WHO WILL ONLY SERVE AS ANOTHER ANCHOR AROUND OUR REPUBLIC’S NECK”?!!???

What is so wrong with wanting to stop bringing in masses of people who will only serve as added strains on our infrastructure, our welfare system and every area of our resources? What is wrong with wanting an immigration system that seeks to fast-track educated skilled workers who will help keep America ahead of the world with a thriving economy and the best technological and military advancements … as opposed to the poorest and most ignorant of Honduras, Guatemala and Mexico?!??!!!???

STOP THIS CARAVAN IN ORDER TO SEND A CLEAR MESSAGE THAT AMERICA WILL NOT BE BULLIED AND COERCED INTO TRASHING HER REPUBLIC BY OUR DEMOCRAT DOMESTIC ENEMIES AND THE COMMUNISTS OF THE WORLD, INCLUDING GEORGES SOROS and Pueblo Sin Fronteras  — Translated as People Without Borders, a communist front group, alongside U.S. Leftstream Media and foreign media and U.S. lawyers and advocates, such as Heather Cronk of ‘Show Up for Racial Justice’, who are paving the way for their crossing, as though these illegal aliens are entitled to enter America.

Go ahead … TRY TELLING ME THAT THIS ISN’T AN INVASION!!!

“New estimates cited by El Universal, a Mexican newspaper, say the caravan now has 14,000 people, many of them already in Mexico while others still wait”.

President Trump must have our U.S. Army in place on the border well in advance, with orders to issue three warnings to the first ILLEGAL ALIENS to approach the border fence. If they attempt to breach the fence in any manner, douse them heavily with Tear Gas.

President Trump should make clear that after ALL Peaceful attempts to stop this Horde of INVADERS have failed, His orders are to open fire on ANY ILLEGAL ALIEN TOPPING THE BORDER FENCE … two warning shots and then right between the eyes.

Maybe then this assault on Our National Sovereignty and Our Republic Will End and to hell with anything the Democrat Commies have to say in this matter since they are in complete cahoots with the organizers and financiers of this mess.