Illegal Immigration is Bad for the Economy, Bad for our Culture, and Bad for America! 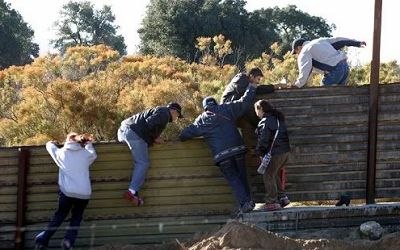 In reality, illegal immigration is not good for the country. Our schools are overcrowded and teachers trying to teach children who don’t speak English. Our streets are more and more congested and when an accident occurs with an illegal, he/she runs from the scene and the citizen is left to pay for the damages, Citizens lose jobs because the employer will hire an illegal for less money (even though it is against the law to hire illegals), our ER rooms are crowded with the illegals wanting their free medical care (hospitals have closed because they can’t sustain anymore), our tax dollars by the billions are spent to support the illegals who come here. Our government ignores the fact that many of these illegals come here because of the handouts of free medical, free eduction, help with housing and food, etc, which encourages the flood of more and more illegals into the country.

While we support the illegal who is here illegally, many of them get paid under the table so they do not have to pay taxes and then send their money back to their country. Our government has made our citizenship almost worthless now. It has NO value, NO meaning. It has become a liability for the citizens. When an illegal can enter our country illegally and is handed more and more of our rights and benefits, why bother to work hard and follow the laws to become a citizen, when they are handed everything without being a citizen.

When illegals enter the country illegally, we have no idea who they are, what diseases they may be carrying into the country or if they have a criminal background, etc. How can we keep our country safe when we have no idea who or what is entering across the open borders? A country without borders is not a country. We are losing our sovereignty more and more and we have a government who does not seem to care what happens here.

Billions of tax dollars, every month, are being spent across this nation, to support illegals who are here. Deporting these millions of illegals back to their countries and stopping others from entering illegally, would free up billions of dollars that could be spent on our overcrowded schools, our bankrupt hospitals, our failing infrastructure. It would free up a lot of our prison space and would leave our highways safer and less congested. What the illegals cost this country far out weighs what they contribute. Anyone wishing to know what the illegals cost their state, can go to the NumbersUSA website and they have the numbers your state pays to support the illegal aliens who are here.

I hear people say that we would break up families if we deport them. We did not cause that problem. The illegals who choose to come here illegally caused their own problem. When leaving, they can take the entire family with them. No one is keeping them here. The bleeding hearts and the special interest groups, don’t seem to comprehend that these illegals who continue to flood this country, are a drain on our resources and our tax dollars. I have to ask “How do you like spending your money to support the illegals while they take their money and send it back to their country?”

The following is from Breitbart:

The lifetime savings accrued from one deported illegal household would provide funds for 125 low-income inner city students to receive the maximum Pell Grant award in 2015-2016 ($5,775); it could cover the cost of pre-kindergarten for 90 at-risk children (around $8,000 per child); or it could cover the one year cost of Medicaid for 124 enrollees ($5,790 based on FY2011 data).

Anyone is more than welcome to come here to live and work and be a part of the American Culture, but they should come LEGALLY. When illegal aliens come here illegally, the citizens are forced to foot the bills using our tax dollars. Many of our citizens have had family members who have lost loved ones at the hands of an illegal alien. These deaths would have been 100% avoidable, had we stopped illegal immigration by enforcing our laws. There is a website, ojjpac, (it is a .org site) which is a list of victims of illegal aliens. These victims range from the age of 7 weeks to 93 years old. We have enough criminals of our own born here, we do not need to bring in foreign ones.