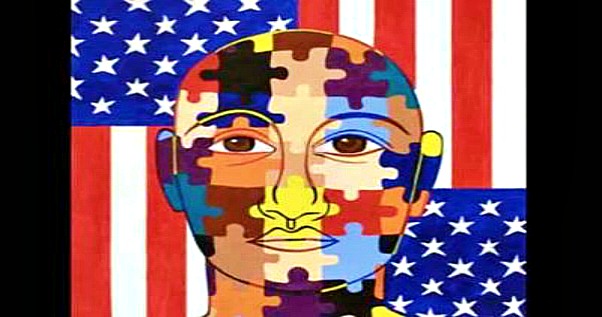 Given the range of human behavior and perception, it’s a social and romantic myth that “opposites attract.” In fact, it’s likely a subconscious tendency for people to associate with others based upon superficial commonalities like ethnicity. All value judgments aside, its root is likely an ancient survival instinct. (Something that has nothing to do with hate or racial discrimination.)

This impulse emerges from one’s family unit, building outward to larger circles of shared interests via common language and cultural experiences. In turn, these “specialized” factions form the matrix of vibrant communities from the local to the state level and beyond.

Still, there always remains some psychological tension between the individual desire for independence—versus any group’s desire for uniformity. However, even in the case of identical twins, diversity is still seen in distinctive personalities. Thus, achieving a balance between all of these forces—where difference is as respected as sameness is embraced—is the foundation of any healthy and prosperous society.

In the modern age, freedom of thought, lifestyle and religious expression defines the West. Specifically, this is why America is the envy of the world: why people from distant shores—and diverse backgrounds—flock to live here. Yet, today, the vital mechanism that makes all of this work is under constant attack by Democrats’ progressivism. Their words imply: ‘come to the U.S. and impose your origin country’s values even when they diametrically oppose our traditions’. Hence, Garrett Hardin, Ph.D. (1915 – 2003), ecologist and social scientist, cautions:

“Diversity within a nation destroys unity and leads to civil wars. Immigration, a benefit during the youth of a nation, can act as a disease in its mature state. Too much internal diversity in large nations has led to violence and disintegration. We are now in the process of destabilizing our own country. The magic words of destabilizers are ‘diversity’ and ‘multiculturalism’.”

Positive differences—same as new ideas—remain wonderful, and necessary things. Indeed, both add “spice” to any human interaction or evolving relationship. But, identity politics preys on those dissimilarities, exploits them for the ruling class’s self-centered political ends. So, liberals subtly promote their Big Lie of the “bad American”: the dominant culture (read: white folks) perpetually victimizes minority groups because of their differing external appearance. Scurrilously, Democrats imply a deep-seated intolerance in our daily lives that does not exist. To add insult to injury, they pretend that those they claim to champion are somehow helpless or inferior. In reality, anyone can realize the American Dream with hard work, and a little luck.

Capitalism is the basis of America’s economic strength—embodied by the good, but often stylistically mercurial President Trump. For context, his attitude of U.S. victory contradicts that of another recent political upstart: socialist Sen. Bernie Sanders (I-VT). Unlike Trump’s motto of “America First”—based upon private sector investment and expansion—Sanders peddles big government intrusion as the “solution” to society’s woes. In retrospect, as a harbinger of failure, was it any surprise that Bernie was swept into office during the 110th session of Congress: when polarizing Nancy Pelosi (D-CA) became House Speaker, and the legislature fell under total Democratic control?

Since that time, what of the nation’s metastasizing debt—nearing 20 trillion under liberals’ (and RINOs’) inept ministrations? Does any clear-thinking person still buy the Washington swamp’s narratives? For one, President Ronald Reagan certainly didn’t. Back on August 12, 1986 he said, “The nine most terrifying words in the English language are: I’m from the government and I’m here to help.”

Absurdly, “helpful” progressives act as if all non-whites have a built-in ax to grind because of their minority status. So, if something goes wrong for them, fault is always “elsewhere”. In fact, identity politics only gains traction because liberals, via the MSM, manipulate the low-information voter into believing he or she is aggrieved. As a case and point, if this is not so, why are they so busy fracturing the country over mute and harmless Confederate statues—otherwise completely ignored for generations?

“Now we’re embroiled in domestic wars of a different kind and the younger generations challenge democracy from within, even marching against free speech, making the protection of the fragile First Amendment ever more difficult.”

When free speech is repressed—as it is now by unhinged leftist mobs—an angry and frustrated environment encourages the generalized use of fists rather than words. Remember, these purveyors of alienation want chaos, open borders, lawlessness, and most of all, tribalism. What’s absolutely alien to them is the American motto e pluribus unum: out of many, one. The underlying reason for all of their destructive vulcanization is simple: a happy electorate votes for Republicans.