Hypocritical Hillary says Trump is a Threat to Democracy 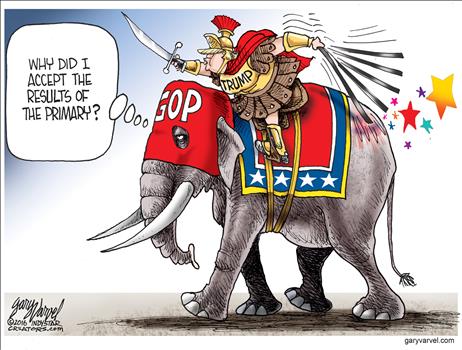 Hillary declares Trump to be a threat to democracy for standing against Democrat voter fraud.

“He [Trump] refused to say that he would respect the results of this election.  Make no mistake, by doing that, he is threatening our democracy.”

So Hillary is threatening to throw Trump in prison if she wins to “protect America from rebellion” in retaliation for Trump saying he would throw her in jail for her corruption if he wins.  Despite all the polls claiming Hillary is winning and Democrats working on down ballot tickets to take back Congress, Democrats are talking like she’s losing.  Hillary, whose BLM followers have already promised riots if Trump wins, is saying that Trump supporters are threatening open rebellion if he loses.  She is denouncing Trump as a puppet of Putin.

Government pundits are claiming that election results cannot be influenced by enough voter fraud to make a difference.  That’s not what they said in 1960 and 2000.  When elections are close voter fraud makes all the difference.  Democrats, by denying voter ID laws, may be capable of adding up to 10% to their votes through stealing identities by having operatives vote under someone else’s name – even if they’re dead.  They vote in multiple states and multiple precincts by owning properties there.  Some just hijack identities of people who don’t register or don’t show up to vote.  In addition, there are the computers that don’t leave a paper trail that can change your vote to whatever they want.  That is how it’s done and this is a known and proven fact despite all the claims to the contrary.

Of all the WikiLeaks emails and Project Veritas videos exposing Democrat and Hillary campaign corruption she and the Democrats are not denying the truth of any of them.  Instead, they are trying to employ the standard operating procedure of liberals when they truth is thrown in their faces – discredit the messenger.  Now Donald Trump is the messenger berating corruption in Washington and all Hillary has to offer is more of the same corruption along with falsified smears of Trump.

Trump is “unfit” to be president, says the current lot of Democrat leaders who have proven to be completely corrupt.

If you want to know the truth about Hillary Clinton and the real threat to America’s democracy it starts here;

All of Hillary’s corruption in one place