How the Inspector General Failed to Do his Job 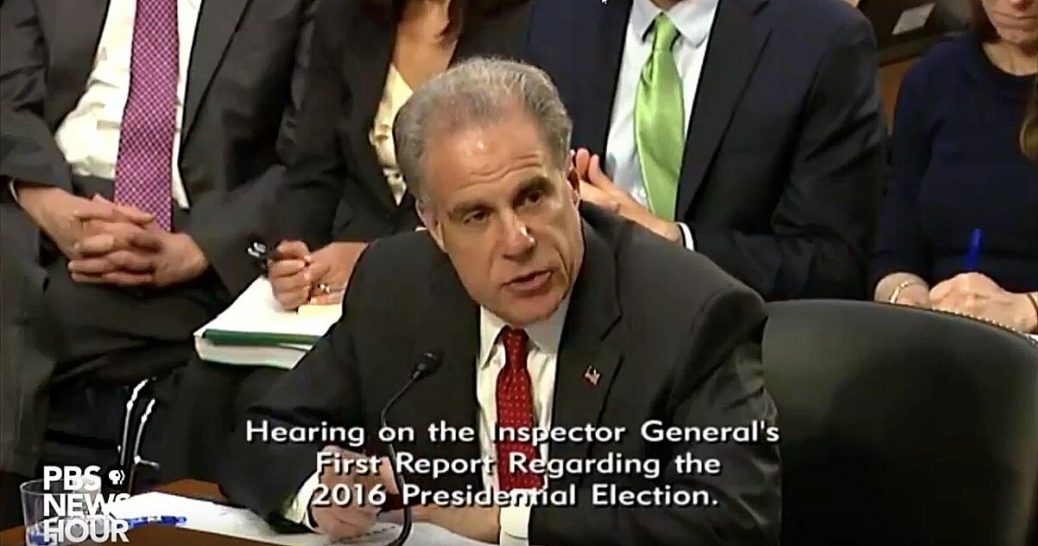 Recently, DOJ Inspector General Michael Horowitz published his report on the Hillary Clinton email investigation. He concluded that the investigators had bias that favored the Democrats but saw no evidence that the bias interfered with the investigation.

What Horowitz did for former FBI Director James Comey was similar to what Comey did for Hillary Clinton. Horowitz wrote ” … we found no evidence that Comey’s statement was the result of bias …” This is similar to Comey saying that for Clinton’s mishandling of top secret emails, “no reasonable prosecutor would bring such a case.” Both statements ignore the obvious.

Regarding Comey’s decision, the typical prosecutor would try a case any time he thought that he had a high probability of conviction. It can be proved that Clinton sent 400 classified emails. The penalty for mishandling classified information is ten years in jail and a $10,000 fine. Clinton could be sentenced to 4000 years and $4 million. The prosecutor would become famous overnight. Clearly, Comey’s decision was guided by something other than standard procedure. That is the evidence of bias.

Apparently, Horowitz disagrees with Comey’s conclusion that Clinton’s infractions were trivial but did not give the opposite conclusion. Horowitz’s recommendations were quite benign. For example, he recommended that the FBI train its employees to avoid showing their biases in text messages. In other words, train them to not get caught.

People appear to be upset with Horowitz’s belief that bias was unimportant. I see this as a Constitutional issue. Amendment XIV states “[No State shall] deny to any person within its jurisdiction the equal protection of the laws.” This is the Equal Protection Clause. It means that the government must apply the law to everyone the same way. It prohibits bias. There is also the question of when it is appropriate to investigate someone. Amendment IV states ” … no Warrants shall issue, but upon probable cause …” This means that law enforcement cannot order anyone else to help them with an investigation, let alone arrest anyone, unless there is a reasonable belief that a specific individual may have committed a crime. Let us test these amendments with two scenarios.

There is evidence that Hillary Clinton may have run an unclassified email server on which there was classified email traffic. This establishes a reasonable belief that she may have violated 18 US Code Section 798. The Constitution allows an investigation. Can the investigator give Clinton a break because she is so nice (insert sarcasm here)? No. The law applies to everyone.

Is there evidence that Presidential Candidate Donald Trump colluded with the Russian Government to damage the 2016 US Presidential election? There is no indication that Trump communicated with the Russians, that he had a method to damage the election, or which state-run election was damaged. There is no probable cause. No warrants may be issued. Can the investigator pursue Trump because he does not like Trump? No. The Equal Protection Clause says that Trump has the same Fourth Amendment rights that everyone else has.

The decisions in Comey’s investigation were apparently based on bias, not probable cause. The burden of proof that there was no bias is on the investigators. This means that the investigation should be redone by people unlikely to have bias.

Some of the same agents went on to investigate Trump for collusion. This work should be redone as well. This means that the Special Counsel investigation of Russian collusion is invalid. Indictments against Paul Manafort, Michael Flynn, and George Papadopoulos should be dismissed.

In addition, the biased lawyers should be fired and disbarred. Andrew McCabe and Peter Strzok are starting to get what they deserve.

Why was Horowitz such a disappointment? President Obama appointed him. Trump has a lot of cleaning up to do.