How States Can Outlaw Abortion In a Way that Survives Courts 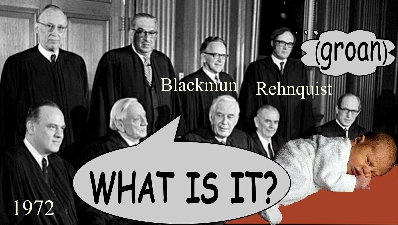 Give Jesus a Gift this Birthday! Give a new year resolution. Rescues those He loves this year.

“How states can outlaw abortion in a way that survives courts” is the title of my book, free to everybody as a PDF. Paperback and Kindle versions are available at Amazon. I have offered them free through emails to Republican lawmakers in 21 states. So far 14 lawmakers from 9 states have accepted. I am posting here at ipatriot to explain the opportunity and ask your help in reaching more. If you would like to coordinate your outreach with mine, write to DaveLeach at Saltshaker.US.

Here is the summary of the opportunity which I have emailed to over 1,000 Republican lawmakers:

“…if [any precedent] is based on an erroneous factual premise, that is clearly one of the factors [for disregarding stare decisis and overturning precedent]…Sometimes there are ‘mistakes of history’ in decisions and ‘mistakes of fact’.” Day 3, 4:53:50

And what is the “erroneous factual premise” of Roe v. Wade? Which have over 45 years been unanimously rejected, not “merely” by the latest science, or by public opinion polls, or by the Bible, (Heaven forbid THAT should become accepted in American government today as a fact-finding authority!) but by every court-recognized American legal authority which has taken a position?

Roe’s claim that judges are “in no position to speculate” about whether unborn babies are people. If they were then, they aren’t now.

Has the fact that all unborn babies are humans/persons been sufficiently established by juries, expert witnesses, state legislatures, individual judges, Congress, and the absence of any contrary affirmation, to invoke Roe’s ruling that state legislatures and courts must ‘of course’ now protect their 14th Amendment rights?”

Of course, that is enough legally recognizable evidence to shift the 14th Amendment obligation of states from protecting the right to murder your very own baby to outlawing ALL baby killing.

In all five categories of court-recognized finders of facts, the verdict is unanimous. Abortion is not “merely” scientifically recognizable as murder: it is legally recognized as murder. Genocide. Infanticide. If judges still “are in no position to speculate” about the fact of “when life begins”, it is impossible for any judge to know anything.

It is simply impossible for any judge to squarely address this overwhelming, unrefuted, irrefutable, legally recognizable evidence and keep abortion legal.

* Judges only address facts that are presented in a case before them. So…

* The case before them must turn on establishing the fact that constitutionally protected life begins at fertilization, not at 20 weeks, or even at 6 weeks.

(The courtroom argument that babies become “persons” when their heartbeat is detected creates a legal obstacle: the absence of any challenge to Roe’s excuse that we still are “in no position to speculate” whether younger babies are humans/persons, or to Roe’s ruling, based on that excuse, that killing them is a “fundamental right”. That means laws must not place an “undue burden” on baby killing. Laws must not “substantially reduce” infanticide. A difficult test for a heartbeat law to survive! But a test which will disappear under the weight of court-recognized evidence that all unborn babies are humans/persons who require 14th Amendment protection.

(To meet that legal requirement, Iowa is actually arguing that its heartbeat law will not prevent a single abortion, but will only require abortions to be done earlier, before babies become persons! The pro-lifers making that argument couldn’t actually believe it and be as proud as they are of giving babies even less time to live!

(But that argument also calls for clear evidence of something that makes a baby a human once he has a heartbeat but not before. There is no such evidence from medicine or science, as pro-lifers have pointed out for 45 years.)

* The defense must build on the 45 years of unanimous legally court-recognized evidence. It must not start from scratch with a new Personhood statement that ignores those long years of evidence. Or start from scratch with scientific or medical expert witnesses while failing to argue that they merely update the thousands of expert witnesses in abortion prevention trials who were never refuted. Or start from scratch with claims about what seems intuitive or obvious to average Americans, which is barely admissible in court, while ignoring the consensus of juries in abortion prevention trials – juries which have court-recognized authority to formalize the best-informed public opinion and wisdom.

* To ensure that the lawyers defending the law will present this evidence, this evidence must be previewed in the bill’s “preamble” or “finding of facts”. For example:

“New Section: Preamble, Findings of Fact: The (name of state) Legislature finds itself obligated to protect the Right to Life of all unborn babies by Roe v. Wade’s order that when the fact is “established” that “when life begins” is at fertilization, then “of course” the 14th Amendment requires states to outlaw abortion. (name of state) finds that no fact could be more legally established than this fact, which is the consensus of all American legal authorities who have taken a position, in all categories of court recognized finders of facts – juries, expert witnesses, state legislatures, individual judges, and Congress with 18 U.S.C. § 1841(d). (name of state) finds that no American legal authority has ever affirmed that any unborn baby of a human is not a human/person, or that protectable “life begins” any later than fertilization. In view of this overwhelming, uncontradicted, irrefutable consensus, (name of state) finds that its legal liability from noncompliance with the 14th Amendment, by failing to criminalize abortion, is greater than any legal liability from taking corrective action in advance of indecisive courts.”

* Pro-life public education must be focused not on just a couple of sound bites in fundraising letters, but on understanding the legal argument well enough to recognize when judges dodge it, preparing the public to hold them accountable when – not if – they do.

The book I offer contains
* an analysis of abortion cases written like a legal brief except readable, that thoroughly supports the above claims;
* the legal and political reasons pro-life bills must preview the irrefutable legal argument; and the legal, political, and Biblical reasons a fundamental attack on abortion must not, initially, address the “three exceptions” or contraception;

* the kinds of pro-life cases that have created irrational baby killing case law, why pro-life majorities didn’t support them, and why the review of state law is our best hope of attracting sufficient pro-life support to educate the public to recognize when judges dodge the irrefutable evidence.

Dave Leach is actually listed in Marquis’ “Who’s Who in America”. (This is to balance the other stuff you've heard.) Has written for Iowa Latino papers and been a statehouse candidate, cable TV & Latino radio host. Published Prayer & Action News. Conservative. Prolife and immigration activist. Quotes God a lot. Other Websites: www.Saltshaker.US, www.SaveTheWorld.saltshaker.us, www.Talk2me.saltshaker.us, http://youtube.com/user/biblewizard2.