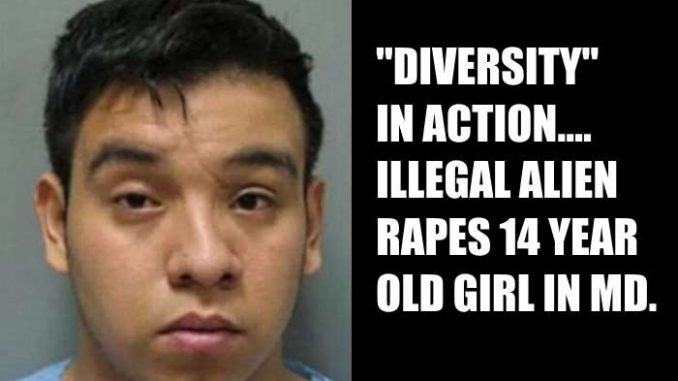 “Part of the reason the president has made illegal immigration and [a] crackdown such a big deal is because of tragedies like this. Immigration pays its toll on our people if it’s not done legally. And this is another example.” – Sean Spicer, White House Press Secretary, on March 21, 2017

What was 18-year old Henry E. Sanchez-Milian—a full-grown adult from Guatemala—doing in the ninth grade at Maryland’s Rockville High School? Likewise, his El Salvadorian partner in crime, Jose O. Montano, 17. Both now stand accused of carnal crimes so depraved that they’re almost too graphic to describe. For their sheer brutality against a fellow 14-year old student, their assault has risen to the president’s attention. Even this eventuality—and their swift, same day arrest due to the girl’s immediate report—is ultimately little consolation. Clearly, her life has been forever changed.

Around 9 AM last Thursday March 16, the two suspects approached the victim in a remote hallway near the gym. Per court documents released that Friday, the girl stated she knew Montano but not Sanchez-Milian. Montano asked for a hug, grabbed her buttocks, and requested sex but was refused. After being rebuffed a second time, he pushed her into a boys’ bathroom. She resisted, held onto a sink, but was overpowered into a stall. Montano then striped her. The possibility of escape was nullified by Sanchez-Milian who swiftly joined his co-conspirator. Cornered, trapped like prey—her cries, begging and screams ignored —they took turns restraining her, forcing her to perform oral sex before gang-raping and sodomizing her. So much for her right to autonomy as a U.S. citizen. What of this child’s reasonable expectation to safety in a public school?

A fundamental truth that neither the school system in Maryland nor U.S. Border Patrol in Texas want to acknowledge: if this duo of illegal aliens had not been present in the school (or for that matter, the country), this outrage would not have happened.

Two of Barack Obama’s “Dreamers” have visited a nightmarish hell upon an innocent. Recall, these young men were raised elsewhere during their formative years. They’ve only been stateside for roughly seven or eight months. How could they understand our cultural norms? Therefore, it’s beyond naive to assume that these illegal foreigners on—or just beyond—the cusp of manhood, would instantly or instinctively acclimate to our customary respect for female minors. Indeed, they were the fox in Montgomery County’s underage hen house. Its doors thrown open by do-gooder school authorities in the name of “diversity” and “inclusiveness”. Rather than being the farmer who protects his defenseless, the school abetted her assault by creating the environment in which such a calamity occurred.

Sanchez-Milian’s path to infamy started as so many other border jumpers do. After all, what true incentive does any lawbreaker have to embrace our cultural standards, or heed our laws? As background, U.S. Immigration and Customs Enforcement spokesman Matthew Bourke said:

“In August 2016, Henry Sanchez-Milian was encountered by a border patrol agent in Rio Valley Grande, Texas, who determined the individual had unlawfully entered the United States from Mexico. Sanchez-Milian was issued a notice to appear [Barack Obama’s de facto ‘catch and release’ policy] in front of an immigration judge, which is currently waiting to be scheduled.”

In hindsight, was it wise to cut this individual loose to disappear into the wild? In any case, he will never make that Texas immigration hearing now (whenever the system gets around to holding it). Ironically, Sanchez-Milian might get his wish of a permanent stay. He’s charged as an adult (same as Montano) with first-degree rape and two counts of first-degree sexual offenses. These crimes carry the possibility of life imprisonment. Subsistence in an American cage. A fate that’s somehow too good for him.

At the moment, that’s cold comfort to the violated 14-year old student. She has been utterly failed by every level of the government the new president has inherited. As we have seen, a systemic problem in which various local, state and federal elements share culpability. Still, the underlying trouble is a bureaucratic mind-set epitomized by Montgomery County Council President Roger Berliner:

That’s convoluted thinking of the highest order. So, as long as this shadowy underclass of squatters doesn’t defy our other laws everything is kosher? Make no mistake—simply by being present within our borders without permission—is already a criminal act. Thus, at best, the undocumented induce resource-draining chaos into our society if not outright danger as demonstrated here. The virtue of an underage girl obviously doesn’t matter to two criminals who savagely took what they wanted, but it certainly should matter to the powers that be in Maryland.

Why then is local politician Roger Berliner outspoken about the wrong thing? His priority, as expressed previously at a meeting of county department heads early last month, is: “We’re fearful they’re [illegals] going underground in a way that will cause harm to them.” Cause harm to them? Tell that to last week’s brutalized 14-year-old child! Today, rather than accept responsibility, Berliner publicly passes the buck, “One of two individuals [Sanchez-Milian] was stopped by ICE in Texas and released. How is this on us?” It’s on him and his cohorts because of their collective failure to protect a student under their care while on school property. If she was Berliner’s daughter, would he still be so blasé and obtuse?

Unfortunately, Berliner’s nonchalant attitude is not unique. It’s widely shared by many similarly insulated decision-makers who shape the public institutions that contributed to this wretchedness. For context, imagine the firestorm if one of the Obama girls had been in her shoes! Of course, that would never happen due to Secret Service protection. Still, the rule-makers responsible—specifically the former president—can afford to send their children to uber-safe private schools. Those places of privilege are not obligated to educate anyone who walks through the door, no questions asked. Thus, theirs are the real sanctuary schools. You know, the same ones the troublemaking Sanchez-Milians of the world—who jump borders and cross state lines—will never gain access to.