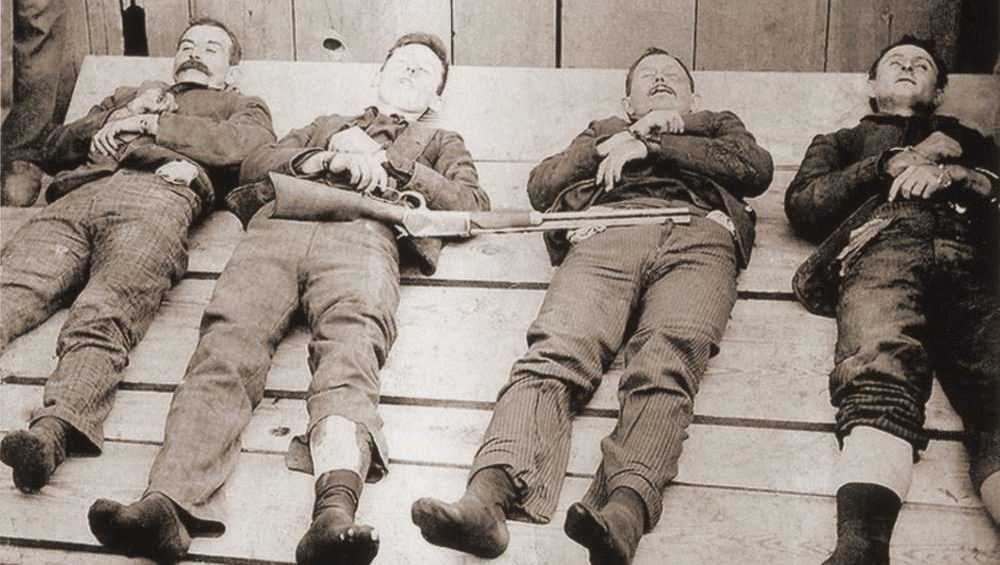 (Just in case you miss it… the following is satire.)

Back in the old days of the “wild west,” following our nation’s Civil War, many settlers were moving into lands claimed by Native American Indian tribes and this created some tension.

There was a “conflict of cultures and religions” between the Indians the newly arriving settlers, that resulted in misunderstandings and even some open hostility. A few deluded bands of radical Indian activists even resorted to open violence, and began attacking settlers, sometimes massacring them in what some Republicans of the time erroneously referred to as “terrorist attacks.” History records that the US government recognized the problem and moved quickly to address it, by banning possession of the most modern lever-action rifles with their high capacity magazines and rapid fire capability, because they had the ability to fire many shots quickly, potentially allowing a user to kill many people before reloading. These military assault type firearms were designed for use by the US Army and were so dangerous and deadly in Union hands that a Confederate soldier once referred to them as, “That damn Yankee rifle that you load on Sunday and shoot all week.”

The government also banned the possession or sale of “repeating pistols” with “high capacity cylinders” that were capable of firing multiple shots (as many as 6 – which is why these guns were called “six-shooters”) to anyone but military or law enforcement members, since they were originally designed for sale to the military and obviously had no reasonable use unless one wanted to kill many people without having to reload. After passage of the laws banning them, the marauding Indian bands were still able to get them from their usual illegal sources, however, the settlers, who were generally law-abiding Americans, were not.

This led to a disparity in armament between the two groups and forced the settlers to develop a new approach to resolving the conflict. As it happened, it was about this time that many of the recently freed slaves were also moving west, and they brought with them a new form of popular “gospel” music including a song called “Kumbaya,” which became very popular in the areas of conflict on the frontier. Further, some of the younger folks among the settlers had recently discovered that by smoking the dried leaves of a plant called “hemp,” which was normally used for making rope, it was possible to become quite “mellow” and less hostile.

From this point on, after an Indian massacre was over, the survivors of the massacre would sit around the campfires with their attackers and smoke hemp while singing “Kumbaya” together.

This led to a cessation of hostilities and the adoption of the settler’s values by the formerly hostile Indian bands….Oh, no, wait…I’m sorry, I got it mixed up – that’s not exactly how it happened THEN… that’s just how the Democrats think it will work NOW. Where’s John Wayne when we need him?!