Hillary’s Obsession with Secrecy and Lies (and then more Lies) 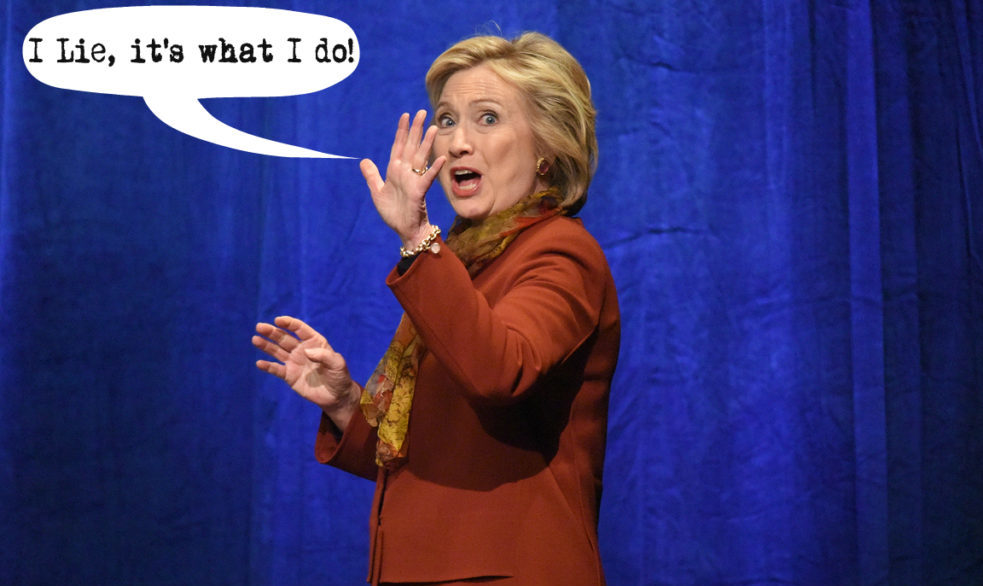 Over the years there have been endless articles and a number of books written about Hillary’s lies, scandals and corruption. I have also written and posted a number of detailed articles over the last few months about her lies, scandals and corruption. Recently I noticed in addition to being dishonest that Hillary has another major weakness. It is an obsession with secrecy, which creates a vicious cycle where she has to lie to cover things up and then lie more to try and keep things covered up. Her collapse at the 911 ceremony is a perfect example of this and confirms that she surrounds herself with mindless sycophants who will obsessively operate the same way. Instead of releasing a statement that she had a mild case of pneumonia and would adjust her schedule for several days, her staff let her physically collapse and then had to watch it played back endlessly on national tv  before they responded to it. This was substantially more damaging to her standing in the polls, compared to simply acknowledging she had developed a mild case of pneumonia. It also made more people aware of, and begin to talk about her lifelong obsession with secrecy and cover ups. Remember her Rose law firm files that disappeared during the “White Water” investigation and then mysteriously reappeared on a White House table when the investigation was closed.

There is an old saying, “timing is everything”. That is absolutely true regarding Hillary’s collapse and her, and her staff’s mishandling of it. It suddenly was less about her pneumonia and more about her mishandling of the situation. It made the media began to focus more attention on her history of this type of behavior. With the current Congressional hearings into Emailgate and the new WikiLeaks, Guccifer 2.0 and an anonymous group’s document release; this could not have happened at a worse time for her campaign.

The recent Congressional hearing into Emailgate was probably the most revealing hearing to date. The State Department aide who worked on the illegal and secret server, Bryan Pagliano did not attend the hearing even though he had been served with a Congressional subpoena. The two technicians (who did not have security clearance) from the firm that maintained the server, and destroyed the emails (after they were subpoenaed) repeatedly took the 5th refusing to answer any questions. However a former Clinton aide who worked on the server, and destroyed the phones with a hammer did answer every question without hesitation, including acknowledging that he had full access to the server and did NOT have a security clearance. In spite of the corrupt Obama Administration’s efforts to bury Emailgate, not only is it not going away, it is causing the media to focus more attention on Hillary’s obsession with secrecy and lies.

And then we have the current document releases, noted above which added two more major blows to Hillary’s campaign.  One was the Obama, Hillary DNC “Pay to Play” activities with actual references to “Pay to Play” and a detailed list of big money donors who were rewarded with highly desirable appointments. The second was Colin Powell’s personal emails which clearly confirmed that Hillary blatantly lied about his advice to her and she also lied when she said that he used the same system that she did (a secret and illegal server). Powell also detailed his efforts to get Hillary’s campaign to stop lying about him.  Powell even expressed his assessment of Hillary as being incompetent and dishonest.

This past week was definitely not a good week for Hillary and it is obviously going to get worse with all this new attention on her and her campaign’s obsession with secrecy and lies.

In addition to being a really bad week for Hillary, the events during this past week also served to further focus a spotlight on how unbelievably corrupt  every branch of the Obama Administration is, starting with the President! This is not Russia or some third world dictatorship. This is America and this is not supposed to be happening in America! How did we get here?

I do not know if the Obama Administration, with Hillary’s help has made America so weak that we cannot fix it. However I am certain that four years with Hillary as President will assure that the America we once knew will not exist again, certainly not in any of our lifetimes.