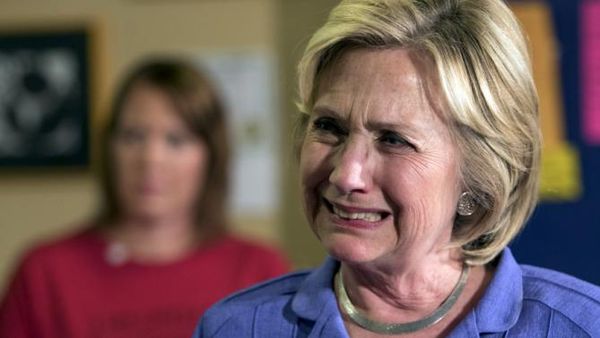 The most recent account of Hillary’s election night meltdown was forwarded to us by a secondary source of IPatriot’s. He’s not shy, mind you, but church talk would say…he’s humble.

As described by our “friend”, election night was like The Wizard of Oz, complete with the witch melting down to nothing after being splashed with water, screaming, “AHHHH….what a world…what a world!”

As we fact-checked the story, we found that a similar version of the election night episode had been published by American Spectator and Breitbart, both credible news sources and so, here is what we received.

Hillary Clinton’s post election celebration plans included hundreds of thousands of dollars worth of fireworks, live performances by various celebrities, such as Cher, who came believing that Hillary was going to win the election, a five-hundred-thousand-dollar special effect glass ceiling that she  would break through in a dramatic display once she walked out on stage at her H.Q., among millions of dollars worth of other celebratory preparations, all paid for by the Clinton Foundation in full.

The most notable damage was located deep in the VIP room of the Clinton camp. A custom 150 inch ultra HD TV, a gift from the Saudi Arabian government, was found with a broken screen. The damage was caused by a $950,000 bottle of champagne that was believed to have been thrown at the screen by the former presidential candidate some time during the election.

Early in the morning, the custodial staff were greeted by flipped-over tables as the floors were covered with expensive food, drinks, and appetizers. Broken champagne flutes and gilded silverware were also seen scattered around the would-be party room.

The  most telling sign of a massive meltdown was the cake. The pastry that  had once proudly displayed the presidential seal, was violently flung against the walls in chunks. A broken topper from the cake in the shape of the white house was discovered lodged firmly into the drywall near the dessert table.

Clinton ’s splurge on party supplies was merely an echo of all the left-leaning polls and hype that “confirmed” Hillary Clinton’s indubitable win. Misled by just about every prediction, Hillary Clinton personally planned one big party for her assumed victory. Once it became clear that it would not be Clinton ‘s night, however, the mood of the party soured rapidly.

A former staffer, who was fired during the rampage, said that the atmosphere around Clinton went from “queen of the hour” to “the girl who was dumped on prom night” in only a few moments.<

Hillary Clinton reportedly became “physically violent” towards her own campaign staff after she realized she had lost the presidential election, according to radio host Todd Kincannon. “CNN reporter tells me Hillary became physically violent towards Robby Mook and John Podesta around midnight; had to be briefly restrained,” tweeted Kincannon.

It was Podesta who was sent out to talk to Hillary’s dejected supporters shortly before Hillary called Donald Trump to concede, with Clinton nowhere to be seen until the following day.

When asked about rumors that Hillary was drunk on election night, Kincannon responded, “She was. I posted about that too. She was in a “psychotic drunken rage” according to my reporter friend. A doctor added sedatives to the mix.”

Kincannon then claimed that CNN blocked the reporter from publishing what would have been a bombshell story.  “The CNN reporter didn’t fail to report it. His editors will not let him. CNN  has banned all “Hillary in the bunker” stories,” he  tweeted.

Secret Service officials and other staff who  worked closely alongside Hillary have previously reported her problems with angry tantrums on numerous occasions. Last year it was also reported that Clinton ’s own campaign staffers feared she could have a serious meltdown and that Hillary had  “been having screaming, child-like tantrums that have left staff members in tears and unable to work.”

In addition to claims that she became irate, author Ed Klein said a source told him Hillary cried  inconsolably to a friend after the results came in, blaming FBI director Comey and President Barack Obama for not doing enough to stop the FBI investigation into her email scandal.

Having spent time in D.C. and in The West Wing where I talked with Hillary staffers I was told that Hillary, like a wicked queen, forbid staff members from making any eye contact with her in the hallways. Indeed when they did see her coming they could not look at her, and had to duck behind a pillar or anything else so as not to be seen by her. These and other things revealed to me makes this story seem perfectly plausible.

And to think that this is the woman we might have referred to as: Madame President. Phew! Thank you Lord.