Hillary Wants to be America’s Queen 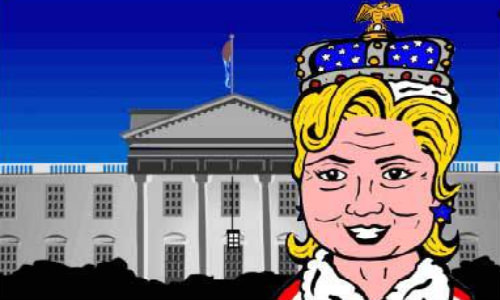 She lies even when lies gain her nothing, and REWARDS corruption among her inner circle, (looking at YOU, Debbie Wasserman-Schultz). In that environment, even little inconsistencies begin to look suspicious.   Remember the health story? Cough, cough. ‘Feeling fine’… ‘Just allergies’… Doctor Drew weighs in, gets his show cancelled… Collapse… ‘just overheated’… People tweet weather conditions… ok, it’s Pneumonia.   This is the deception Hillary’s famous for… she even had the primaries in her own ‘Democratic’ Party ‘rigged’. And when DWS resigned in shame? She was immediately snapped up by the Clinton campaign.   First off, we already knew Hillary had a custom-built podium, presumably to minimize the apparent difference in height between the candidates. That’s where this latest controversy begins.

First, there was the video clip from the end of the debate of someone (dubbed ‘The Cleaner’) taking a folder away from Hillary’s podium, before walking past the moderator’s table.   The question being asked by some, is ‘did Hillary have advance notice of the questions?’   Hillary seemed a little ‘too’ ready for the questions. Is this the same Hillary who didn’t understand that ‘C’ stood for Classified?   We now know who they guy in the clip is: The Cleaner has been identified as Brady Williamson, a long time democrat operative and three-decade member of the democrat debate negotiation team.   One keen observer noticed a glint of light off of Hillary’s podium that was not seen on Trump’s.   If Hillary were generally thought to be honest, this would probably be waved away as a trick of the light shining off the polished wood. But Hillary has a track record of gaming the system, doesn’t she?   Find the video of the debate, and notice which podium has all the activity around it?  You probably want to watch this with the sound down, because it goes way past actual observable details, and ventures into wild conjecture, especially after the 10-minute mark. But it points out the observable differences between the podiums that are giving some observers pause.   And again, we emphasize — if Hillary had been an honorable woman, none of this would EVER have even come up in the first place.

Democrat presidential nominee Hillary Clinton claims to care about every American. What does she really think about those who can’t help her out, though? As November comes closer, we look back at one incident involving her luggage that could tell us a lot about how a Clinton presidency might look.   Back in 2014, FBI agent Gary Aldridge published a book called “Unlimited Access,” dealing with his time at the bureau. A lot of the most explosive details from it had to deal with Aldridge’s interactions with the first family during the 1990s — specifically, with Hillary Clinton.

According to the U.K. Daily Mail, and to nobody’s surprise, Hillary Clinton was considered a pain to work with and was nasty to almost anyone she came across. She mistreated Secret Service agents and pretty much every person in the White House apparatus.

On one occasion, she asked an FBI agent to carry her luggage. That wasn’t part of his detail, and insulting at the very least. When he declined, she exploded at him.   “Stay the f*** away from me! Just f***ing do as I say!” Clinton reportedly told the agent. Classy.   We’ve all heard the tales about how Clinton has mistreated the Secret Service or our men in uniform, which should be a good enough reason not to vote for her. Behind the supposedly equable exterior lies someone who isn’t exactly the most grounded individual.   Remember: After Hillary Clinton gets your vote (or, hopefully, not), she doesn’t have to kiss up to you anymore. You’re just another FBI agent who should be handling her baggage. We’re all going to be Hillary Clinton’s baggage handlers, and it’s going to come at the expense of our economy, our constitutional rights and our security.   Is this the woman you want as our commander in chief? I certainly don’t.

And, even newer was the leaked audio tapes and how Clinton really thinks about the millennials. Hacked audio of a conversation between Hillary Clinton and donors during a February fundraising event shows the Democrat nominee describing Bernie Sanders supporters as “children of the Great Recession” who are “living in their parents’ basement.”   Speaking at a Virginia fundraiser hosted by former U.S. ambassador Beatrice Welters, Clinton says in a clip released by the Free Beacon that many of her former primary opponent’s supporters sought things like “free college, free health care,” saying that she preferred to occupy the space “from the center-left to the center-right” on the political spectrum.  During the conversation, also reported in the Intercept, Clinton confesses to feeling “bewildered” by those to her far-left and far-right in the election.

“There is a strain of, on the one hand, the kind of populist, nationalist, xenophobic, discriminatory kind of approach that we hear too much of from the Republican candidates,” she said. “And on the other side, there’s just a deep desire to believe that we can have free college, free healthcare, that what we’ve done hasn’t gone far enough, and that we just need to, you know, go as far as, you know, Scandinavia, whatever that means, and half the people don’t know what that means, but it’s something that they deeply feel.”

While stressing the need to not serve as a “wet blanket on idealism,” Clinton paints fans of the then-surging Vermont senator as political newbies attempting to deal with an economy that has fallen short of their expectations.   “Some are new to politics completely. They’re children of the Great Recession. And they are living in their parents’ basement,” she said. “They feel they got their education and the jobs that are available to them are not at all what they envisioned for themselves. And they don’t see much of a future.”   Clinton added: “If you’re feeling like you’re consigned to, you know, being a barista, or you know, some other job that doesn’t pay a lot, and doesn’t have some other ladder of opportunity attached to it, then the idea that maybe, just maybe, you could be part of a political revolution is pretty appealing.”

“I think we all should be really understanding of that,” Clinton said.   The audio, which according to the Free Beacon was “revealed by hackers who breached the email account of a campaign staffer,” surfaces the same week that Sanders hit the campaign trail to try to win those same young voters that Clinton has struggled to attract since clinching the Democratic nomination. For Sanders to cave in as he did, there had to be a deal that was made, and I’ll bet a steak dinner on that!

Now, let’s talk about her running mate, Tim Kaine, for a bit.   Tim Kaine lied and got caught doing it…

The Democrat Party relentlessly panders to the Hispanic community to get votes.   Vice Presidential nominee Tim Kaine sank to new depths of shameless political spins during a recent CNN interview.   But what shocked viewers was that his statement was such an over-the-top lie that he got called out by the liberal host.   Appearing on CNN’s New Day, Hillary’s running mate – Senator Tim Kaine – claimed that sanctuary cities don’t exist.   Mediaite reports:

“Democratic vice presidential candidate Tim Kaine was called out by CNN New Day host Chris Cuomo Thursday after suggesting that sanctuary cities– localities that refuse to cooperate with federal immigration officials– do not actually exist.   “I trust the voters of communities to hold their mayors and their police departments responsible,” Kaine said. “When Donald Trump kind of goes after these phantom ‘sanctuary cities’ and talks about how bad they are, basically what he’s going after is police chiefs. And I trust police chiefs in terms of knowing what should be done to keep their communities safer and police departments and mayors a lot more than I trust Donald Trump.”

That was too much even for Chris Cuomo – the son of liberal icon and former Governor of New York, Mario Cuomo.

Mediaite further reports on the host taking Kaine to task: “Cuomo took issue with Kaine’s insistence that the idea of sanctuary cities was only “phantom.” “But why do you say ‘phantom’? You know that there are places that refuse to cooperate with Immigrant Customs Enforcement and they have their assembly of different reasons for why they do it, but sanctuary cities are real,” he said. “They exist, they’re not phantom,” he continued. “And a lot of people believe that, you know, you have those people being rewarded for not working hand in hand with ICE.”

Sanctuary cities became a hot-button issue during the campaign after the murder of Kate Steinle.   Steinle was killed by an illegal immigrant who had previously been deported five times, but was able to roam freely in the sanctuary city of San Francisco.   CNN reports on the circumstances surrounding her murder: “On the evening of July 1, 2015, Steinle was walking on a busy pier of the Embarcadero with her father when there was a single popping sound in the air. The 32-year-old medical device sales representative was shot in the chest, a bullet piercing her aorta, according to the lawsuit.   Her father, James, held her in his arms. “Help me Daddy,” were her last words to him, the lawsuit said. She died later at a hospital.   The man accused of firing the deadly shot — 45-year-old Juan Francisco Lopez-Sanchez — is an undocumented immigrant and a repeat felon who has been deported five times to Mexico, according to the suit.”

Parting shot…I would say those are worthwhile goals and I believe Trump is the one that can do them. If, however, your thinking is that we should have four more years of Obama, his failed policies and lies, then, by all means, vote for Mrs. Clinton.