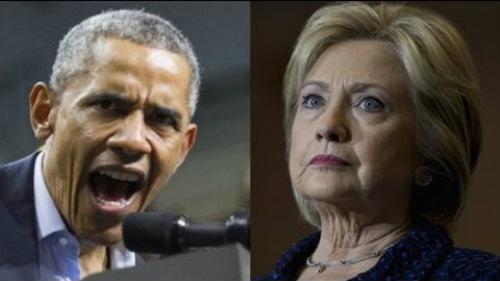 Obama says if Trump is elected then everything he has done in the last eight years will be reversed.  In eight years Obama has run up trillion dollar deficits to double the national debt, run a stagnant economy that required some number fixing to keep on the plus side of zero growth that he calls a record economy, pretended that unemployment dropped due to the phony U3 number that has gone below 5% because millions of people dropped out of the workforce as shown in the U6 number, reduced America’s military, had riots in the streets and terror attacks around the country, opened our borders to illegals and Moslems who want to impose Sharia law on the Great Satan, and not only allowed but assisted ISIS and the Sharia Jihad to flourish in the Middle East, put his boot on the necks of allies to let Moslems invade their countries, and given a hundred billion dollars to the world’s state Islamic terror states, not to mention allowing Russia and China to threaten and invade their neighbor’s territories.  There could be no better endorsement for The Donald as Obama launches into a fear-mongering tirade in his panic that all he has achieved could be wiped away.  As ObamaCare premiums skyrocket as designed, Obama is blaming Republicans, as usual, for all the woes of the nation and the world he has been running for the last eight years.

Eight years of Obama putting his boot on the necks of American business, bringing foreigners to overwhelm Americans, and unleashing the Jihad on the world should be enough to clue in even the most delusional Democrat.  But there are still tens of millions of people who are running to the polls to vote for Hillary.  I would say Americans but very few of them love this country.  Most would say America has never been great despite Hillary and Obama now claiming America is becoming great under their thumbs when all that’s becoming great is their bank accounts.  Obama, in violation of campaign laws, has been using taxpayer money to go on the campaign trail for Hillary, and his speeches at rallies are all about how President Trump will destroy all government entitlements and benefits, take money from seniors and those on welfare, leave black colleges destitute, and give tax cuts to the rich and make the Middle Class pay for it.  This is the same deluded crap that Hillary is doing saying Trump is emotionally unstable and can’t be trusted with his finger on the nuclear button.  It’s the exact same fear-mongering demagogic horse manure they flung at Ronaldus Magnus who won the Cold War without a shot being fired!

All hope and change goes out the window, fate of the world teetering

Democrat conspiracy loons are saying FBI Director Comey is a Russian agent.  Carville says Comey is conspiring with Trump, Republicans, and FOX News to do the bidding of the KGB.  While Democrats have been allied with the Muslim Brotherhood for the past eight years the enemies of freedom have all been on the rise.  The Left: Socialists, Islamists, Communists, Nazis, and Fascists are on the rise throughout the world thanks to the corruption of America’s government and the weakening of her economy, military, culture, and national spirit.  The Land of the Free has been dumbed down to the point that ignorant youths believe every wrongful ideology they are taught, believing that;

Liberal hysteria from the election to global warming

It’s funny to watch how hysterical liberals become when they get desperate.  When Deep Throat, who leaked Watergate, revealed himself to be an FBI agent, liberals were all grins and giggles heaping praise on him for “saving America.”  Now that WikiLeaks is getting Hillary’s emails from FBI leakers they are accusing them of working with Russia and being Satan incarnate.  Even so, half the country doesn’t have the first clue what is going on, only that they are being told by their messiah and his chosen successor that everything the Right says is a lie.

The difference between leftist fearmongering and righteous forecasting is that the Right’s predictions come true because they’re based on reality.  When conservatives said ObamaCare would cause premiums to skyrocket they did.  When liberals said Social Security would end it didn’t.  Liberals are incapable of predicting anything correctly because they don’t understand how the world works.  They call proper conservative evaluation fearmongering because they don’t understand the difference.  Warning people of the obvious consequences of their bad decisions is not the same as liberals duping the gullible through fearmongering.  That’s why they so easily fall for the global warming fraud of Chicken Little Democrats and don’t realize that their solution of taxpayers giving them more money is just a means of parting fools from their money.

It’s a hoot listening to Hillary slander Trump supporters as demonic Nazis.  It’s even more comical to hear Obama say that if Trump is elected then the oceans will rise and mountains will fall.  The only mountain that will fall is the mountain of corruption leftist Democrats have built in D.C. and the rising tide of the ocean is the tsunami of the people’s righteous wrath that will wash it away.