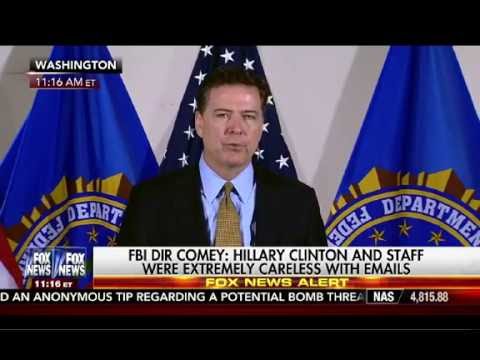 Well, the suspense is over.

Today, Director Comey announced that he will not recommend criminal charges, observing only that Hillary was “extremely careless” and alluding to a potential misdemeanor offense if Justice is willing to go that route. I’m sure she and her hubby are deliriously happy and relieved, as are her flipper-clapping loyalists. How nice. Now the Clinton Camp will regale us with unbearably faux indignation and shameless spin. Oh, goody.

While I respect Mr. Comey’s judgement and even-handedness, his description of her handling of classified material as “extremely careless” is a perfect bumper sticker for those of us who are justifiably opposed to a Hillary presidency. That description pretty much sums up what she is all about–from Emailgate, to Benghazigate, to Whitewater, etc. etc, etc.

The bigger question for me is what of the many Americans currently serving prison terms for doing exactly what HilLIARy has done, i.e. carelessly handling classified and official emails? Let’s face it, folks, she got off light–and WE ALL KNOW IT.

That said, there IS a silver lining here: this poses an opportunity for those imprisoned for having committed similar offenses to appeal their convictions.

In any event, we’d best get used to a system that, in the end, favors the well-connected and powerful. You and I would be in jail, or at the very least, we would have been officially reprimanded and probably fired from our job. Regardless of one’s political persuasion, no reasonable American can deny such a scenario with a straight face.

Lingering, of course, is what clearly appears to be a mountain of evidence that the Clinton Foundation received seriously questionable and likely unethical donations from businesses and foreign governments alike while HilLIARy was Sec. of State.

One thing you have to say about the Clinton Mafia: when it comes to skirting the law, the Clinton underworld will always be a target rich environment, which begs the question, are thoughtful Americans really willing to tolerate such a scandal-prone and unethically challenged scoundrel being our President? If so, it really is the last nail in the coffin for this union and the republic for which it stands.