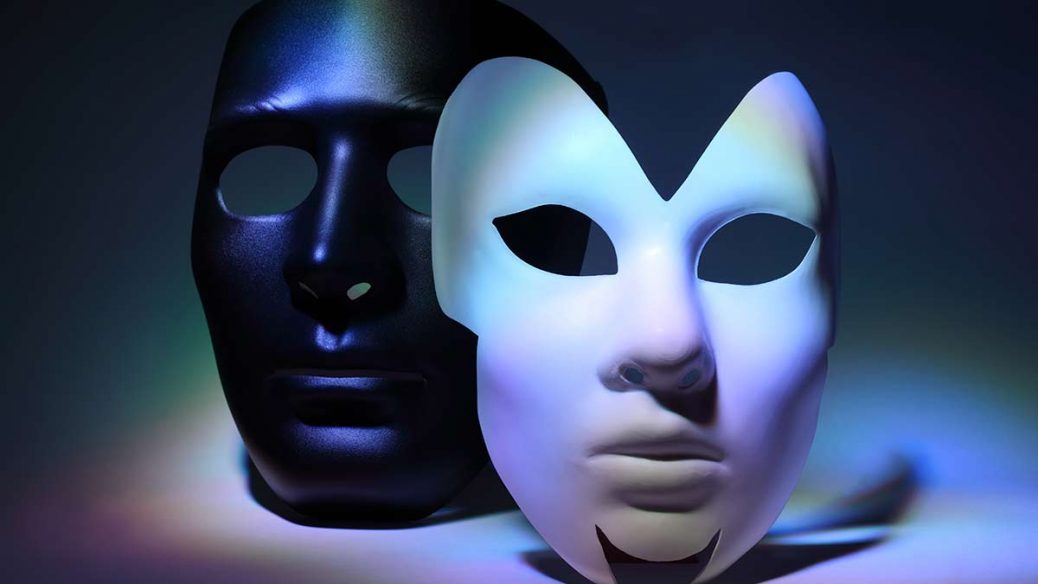 A photo presumably taken at a costume party years ago shows Bill Clinton as a simple farm boy and Hillary in blackface.  When the photo of a Republican in blackface shows up, no matter what the occasion, the leftists immediately move to kick that person out of political office and ruin their lives. Then they encourage the public to shame him or her continuously by harassing them in their homes and in restaurants while the George Soros newspapers continue to pound them. As long as the ‘offender’ is a Republican.  So even if Hillary did pose in blackface,  all demoncrats get a pass. There would be nothing said. 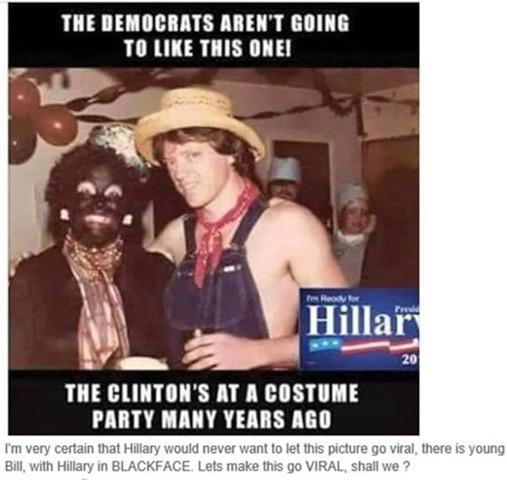 So let’s discuss blackface:
Blackface has a long and beautiful history. The popular movie star and entertainer Al Jolson always performed in blackface. Who can forget him down on one knee with tears in his eyes singing, Mammy? Another beloved entertainer, Eddie Cantor also performed at times in blackface.
Blackface was NEVER intended to be a ridicule or a put down of any kind. It was never ever used to downgrade anyone. It frankly was a celebration of people. Minstrel shows were a big part of the entertainment field in those days, which consisted of about 8 people in blackface, a white chorus, a white ‘interlocutor’ wearing white tails who sat in the middle and served as the straight man for the comedians. And oh, was the comedy delicious!  It was fall-on-the-floor funny with the schemes and ideas the comedians expressed to the interlocker.  And there were some variety acts such as tap dancers.
Many of the minstrel shows had street parades at the noon hour to stir up interest in the show, and the people came in droves. There was no vulgarity whatsoever in the shows. It was total of clean entertainment. And it was fun.
There were several minstrel stars, including Skeets Mayo from Nashville, Sllim Williams, and Happy Kellems who was also a great circus clown. There were dozens of these stars who drew people into the theaters. With Happy’s expressions and buck teeth (He would say he was the only one in the world who could eat an apple through a picket fence), he was absolutely hilarious and actually did a stint on Broadway.
Years ago they had several minstrel shows touring the country to packed houses. The theater had a big section for black people which was always filled. And they laughed louder than anyone. THEN, the Communists began to cause dissention and controversy claiming that the shows degraded blacks and ridiculed them which was totally false. But causing conflict between blacks and whites would help the leftists weaken our country. They basically wanted to turn all people against others.And their publiczed goal was to shut down minstrel shows.
This writer was actually on one of these shows, The Bill Bailey Minstrels,  the last minstrel show to tour and perform. I did not work in blackface but was a tap dancer. While a chorus of 50 men standing at the back of the stage swayed and hummed the song, “Ida” I danced over the stage, onto bails of hay, leaping from one stack to another.
The NAACP that the Communists had gotten their fingers into long ago, worked with the Democrats and the newspapers to stir up the public against the shows with the goal to shut them down which is an exhibition of power, another reason the DemRatCommunists use this method…to demonstrate power.
When the Bill Bailey Minstrel Show performed in Florida, several blacks came backstage to see us and said, “Don’t you all pay no attention to that NAACP. You keep on doing these shows. They’re funny and we like them. So there is the whole case in a nutshell.  And as the attorney said: “I rest my case.”
The big question is: Where are the Demorcrats? There has not been one peep out of any of them since the photo of Hillary in blackface emerged. The Democrats are Communists and with George Soros leading them, have as their goal to turn the entire world into a Communist run planet. And you do NOT want that.
While Soros and the other Democrat dictators will live in total luxury, like Venezuela, we will not be able to buy the simplest things like toilet paper. And here is what it is like when under Communist dictatorship. Remember, I’ve seen it.
When a family member dies in custody of the police, after being horribly tortured, they throw the body in the back of a pickup truck, drive to the family’s house, take the body, throw lit on the porch with a thud, ring the doorbell and get back in their vehicles, leaving the shocked family to find the body and deal with it.
When an official makes a speech, all are required to be there. At the end of the speech the crowd must applaud. Officials throughout the facility watch to see who the first is to stop applauding, grab them up, arrest them and take them to prison.
They have a stranglehold on every citizen.  I once saw a drunken man trying to ride a bicycle weaving about the road.  He was so miserable with the system he was living along with many others who turned to Vodka to perhaps soften the blow to the life they had been forced into. Oh and there is much more.
This is why this writer is pushing back at the risk of being killed.  We will all be killed anyway if the Communists succeed. I would rather die pushing back than simply waiting for them to take over where it will happen anyway.
Respond to negative newspaper stories about our president with letters to the editor, phone calls and making it know that you object to their slant on an event. Again, we outnumber the Reds. Do not be fooled by their boasts.
ANALYZING TODAY’S NEWS FOR TOMORROW’S HISTORY

Watch for story on this subject Tuesday the 12th by Dr. Don Boys on my website: www.revaustinmiles.com