Hillary Gleeful over the Slaughter of ‘Trumptards’ in Vegas 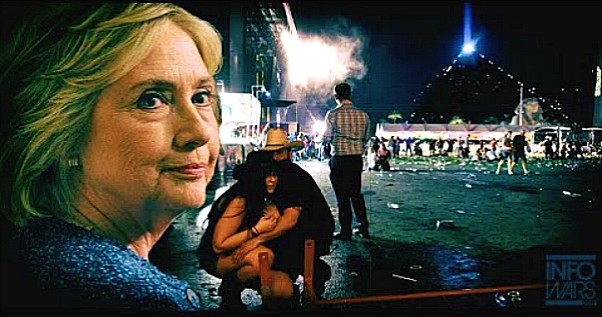 ALL Democrats have this blood on their hands.  “We don’t know his motivations.”  They say the same thing about Islamic jihadi terrorists.  It’s not rocket science.  If you want to know the motivations of evil people listen to those who celebrate their acts.

Vegas shooting proves leftist fascists, not white nationalists, are the ISIS of America

Immediately after the shooting in Vegas, Hillary Clinton tweeted that America needs more gun control along with hundreds of leftist Democrats celebrating the massacre of “country music loving, gun-toting, Bible thumping, Republican Trumptards.”  That’s what Democrats say after a Democrat massacres a bunch of Republicans.  It gives them a reason to say they should take Republican’s guns away.  This is what Democrats do.  They don’t unite, they divide.  They don’t protect people, they make them vulnerable.  They don’t condemn evil, they justify it.  They don’t convict the criminal, they blame the victim.  Contrary to what Democrats say, it is illegal to own or make an automatic weapon.  But the law doesn’t stop people from committing crimes.  Guns do not commit crimes, people do.  Blaming gun violence on the gun is like blaming spelling mistakes on the pen.  It is not the law abiding citizens who should be disarmed – it’s the criminal Democrats.  The Democrats on the streets of Chicago and the Democrats who are rioting, looting, and attacking people for speaking out, and every single Democrat who has spoken out the lies that Democrats tell about Republicans saying;

The party that promotes killing babies in the womb and setting criminals free to commit murder in America’s streets say they are for life and peace.  It’s not rocket science to see through their façade.  It doesn’t take a genius to see through their lies.  After a year of searching for nonexistent evidence of Russian collusion, Democrats still insist that Trump stole the election through Russian hackers.  But before blood had dried on the streets of Vegas and they had investigated his background they were denying any connection between the shooter and ISIS.  More than likely there is none, except perhaps learning from them how to convert his guns to fully automatic weapons.  But leftist terrorists, regardless of their faction, are all the same from Islamo-Nazis to commie fascists, all of them lie about the righteous, dehumanize them, and justify their murders.  Liberals who lack a moral compass cannot tell the difference between the lies of the Left and the truth of the righteous and it all boils down to the culture they are building in America that turns away from God.

The university professor challenged his students with this question. Did God create everything that exists? A student bravely replied, “Yes, he did!”

“God created everything? The professor asked.

The professor answered, “If God created everything, then God created evil since evil exists, and according to the principal that our works define who we are then God is evil”. The student became quiet before such an answer. The professor was quite pleased with himself and boasted to the students that he had proven once more that the Christian faith was a myth.

Another student raised his hand and said, “Can I ask you a question professor?”

“Of course”, replied the professor.

The student stood up and asked, “Professor, does cold exist?”

“What kind of question is this? Of course it exists. Have you never been cold?” The students snickered at the young man’s question.

The young man replied, “In fact sir, cold does not exist. According to the laws of physics, what we consider cold is in reality the absence of heat. Every body or object is susceptible to study when it has or transmits energy, and heat is what makes a body or matter have or transmit energy. Absolute zero (-460 degrees F) is the total absence of heat; all matter becomes inert and incapable of reaction at that temperature. Cold does not exist. We have created this word to describe how we feel if we have no heat.”

The professor responded, “Of course it does.”

The student replied, “Once again you are wrong sir, darkness does not exist either. Darkness is in reality the absence of light. Light we can study, but not darkness. In fact we can use Newton’s prism to break white light into many colors and study the various wavelengths of each color. You cannot measure darkness. A simple ray of light can break into a world of darkness and illuminate it. How can you know how dark a certain space is? You measure the amount of light present. Isn’t this correct? Darkness is a term used by man to describe what happens when there is no light present.”

Now uncertain, the professor responded, “Of course as I have already said. We see it every day. It is in the daily example of man’s inhumanity to man. It is in the multitude of crime and violence everywhere in the world. These manifestations are nothing else but evil.”

To this the student replied, “Evil does not exist sir, or at least it does not exist unto itself. Evil is simply the absence of God. It is just like darkness and cold, a word that man has created to describe the absence of God. God did not create evil. Evil is not like faith, or love that exist just as does light and heat. Evil is the result of what happens when man does not have God’s love present in his heart. It’s like the cold that comes when there is no heat or the darkness that comes when there is no light.”

The professor sat down.

This Urban Legend, attributed to Albert Einstein, illustrates how Democrats turning America from God is contributing to the increase of evil in this nation.  Liberal’s flawed logic would compare the lesson of these scientific facts to things like poverty being an absence of wealth, or constipation being an absence of bowel movements.  Their witless mockery of scientific fact renders their rhetoric fatuous ignorance attempting to distract from the truth.  America is being unmade by the evil of the people who demanded slavery be kept in the Constitution, fought a war to keep slavery, and have been undermining America for the last century in an attempt to overturn the Constitution and make themselves the absolute rulers.  The most important step in doing this is to disarm the people.  Democrats in cities allow criminals to run rampant so they can justify militarizing the police.  Idiots like Rachel Maddow speak against the 2nd Amendment as people wanting to have nuclear weapons so they can be equal to the government military.  While this is certainly true of people like Kim Jong Un who wants them so he can threaten America claiming self-defense, it is an obvious mockery of citizens who want protection from criminals.  Everyone knows that police only sometimes are able to protect people, but mostly just clean up the mess.  The stupidity of Maddow and Clinton ignores America law that criminals violate.

Hillary Tweets her ignorance and hate