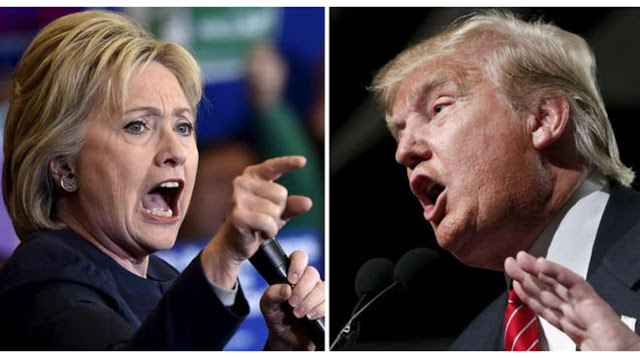 Rebutting the “copy and paste” comments against Donald Trump.

Clinton emails. Trump charity fraud:  Charity fraud?  CHARITY fraud?  Are you serious?  The Clinton Foundation is being deeply investigated by the FBI for fraud (Pay-to-play), and that organization only donates SIX PERCENT while taking “donations” from nations that execute gays, allow for the rape of women, and also fund global terrorism.  The Clinton Foundation IS the charity fraud, and these fake allegations against Trump are, as previously mentioned, to deflect from the Clinton’s REAL crimes.

Clinton emails. Trump calls for nuclear proliferation:  What?  Talk about a lie.

Clinton emails. Trump calls for national stop and frisk:  Again, media spin on comments that were taken way the hell out of context.

Clinton emails. Trump violates trade embargo with Cuba:  You mean the same trade embargo that Obama said was wrong and needed to end?  Obama was the one who violated the Embargo!

Clinton emails. Trump sued over Trump U fraud:  There was no fraud!  There was No case!  End of story!  It was made up BS!

Clinton emails. Trump bribes DA:  Another lie to deflect from Hillary’s long history of manipulating the justice system to favor herself.

Clinton emails. Trump doesn’t pay taxes for 20 years:  How could someone following the tax laws to the letter be considered “not paying taxes”?  You know who ILLEGALLY doesn’t pay taxes?  The Clintons!  They use their Fraud Charity Clinton Foundation as a means of becoming rich!

Clinton emails. Trump calls for ban of an entire religion from entering US:  You know something?  This is ignoring the fact that he is talking about MUSLIM EXTREMISTS who seek to destroy this nation.  This is probably the worst thing on this list, because it actually gets people killed.  This shows a blatant disregard for WORLD POLITICS (more on this later), and shows that you are just creating a narrative to support your ideology.   If you knew anything about WORLD POLITICS, then you’d know that the Muslim “migrant” problem in Europe is destroying the entire continent, and this happened before with the Iberian Invasion.  This sort of partisan ignorance is EXACTLY why people are voting for Donald Trump.

Clinton emails. Trump lied about support for Iraq War over and over in debate:  What a load of crap!  Hillary VOTED FOR THE WAR and then said she didn’t!  She actually is ON RECORD voting for it in the senate!!!

Clinton emails. Trump in court for rape of a minor:  He is NOT in court for rape!  The charges that were filed were done incorrectly, with no name, and filed by an attorney and was promptly tossed out.  This is, again, to divert from the real crimes that Hillary has been accused of, which there is sufficient evidence to warrant an investigation.

Clinton emails. Trump penalized for racist housing discrimination:  This is a LIE!  He was given the Elis Island award for his work with the Minority Communities and even bought a country club so he could allow blacks and women to join!  Try harder!

Clinton emails. Trump files for bankruptcy 6 times:  You clearly do NOT understand finances if you think there is something wrong with this.

Clinton emails. Trump goes 0-3 in debates by showing scant knowledge of world politics: Ok, I will give you debate #1, but he HAMMERED her in debates two and three, and those debates were so rigged that Donna Brazile was FIRED for cheating.  And Hillary, in an act of desperation, actually GAVE OUT nuclear response times on international television!  Talk about not understanding “World Politics”. I mean, can you be ANY more slanted in these points?

Clinton emails. Trump questions judge’s integrity because of parent’s heritage:  This is again, more media spin that leaves out FACTS:  the judge in question is a member of La Raza, a Mexican extremist group that seeks to take over and control the territory that Mexico lost to the US when Santa Ana got his ass handed to him.  This judge would have been unable to be impartial in the case in question, and Trump was correct in suggesting he recuse himself.

Clinton emails. Trump deletes emails involved in casino scandal:  Meaningless.  Did this have anything to do with national security?  A child sex ring?  No?  Ok, let’s move on.

Clinton emails. Trump commits insurance fraud after Florida hurricane:  More lies!  It was Hillary and Bill Clinton that committed fraud when they took money for Haitian relief and NEVER gave the money to the victims.

Clinton emails. Trump has dozens of assault victims and witnesses come forward with allegations of abuse:  Allegations that have been disproven by eyewitness accounts and let’s not forget that Gloria Allred PAID off several of them to make these allegations, knowing that they would get thrown out of court.  This was done, again, to deflect from Bill’s real, confirmed, sexual assault and rape, in which we ALL know about.

Clinton emails. Trump attacks former Ms America for being overweight: No he did NOT!  She had a contract to stay in shape and when she was in danger of breaching that contract, Trump actually went with her to the gym to get back in shape!

Clinton emails. Trump tweets about sex tapes at 3am: #1: you don’t know how twitter works; #2:  Where was Hillary at 3am when 4 Americans were being slaughtered in Benghazi?  OH wait, she didn’t want to send air support because the attackers were confirmed to have the stinger missiles that SHE illegally sold to Muslim insurgents through an arms dealer.

Clinton emails. Trump calls for US citizens to be sent to Gitmo:  Didn’t Obama run TWO campaigns on closing this thing?

Clinton emails. Trump calls for more extreme forms of torture to be used:  Really?  You mean the same “enhanced interrogation” that Obama didn’t get rid of?

Clinton emails. Trump asks why cant we use our nukes if we have them:  I guess you missed the part about Hillary giving away Nuke Response time, eh?

Clinton emails. Trump calls for offensive bombing attack on sovereign nations because someone gave the middle finger:  Are you out of your MIND?

Clinton emails. Trump calls to kill women and children of suspected terrorists:  I am pretty sure right now that you are a clear supporter of terrorism and terrorists.

Clinton emails. Trump says women should be punished for having abortions:  You left out the “illegal” part.

Clinton emails. Trump makes fun of disabled people:  As Warner Wolf would say, “Let’s go to the videotape”;  He never did anything of the sort.

Clinton emails. Trump calls for end of freedom of the press:  We DO NOT have “free press” when you have the DNC and the Democrat party colluding with every major news outlet to manipulate narratives, to change stories, and to publish cherry picked information to make the Democrat Party and its candidates look good while making their opponents look bad.  This is NOT “free press”; this is propaganda, and Trump, like the rest of us, want to see this corruption end.  We are sick of it. He wants a truly FREE press by getting the Democrat Corruption OUT of the Press.  This is where your argument backfires, again, because you are doing exactly what the media is doing:  manipulating the narrative to accuse the opponent of what the Clintons and the Democrat party are actually doing and have been CAUGHT doing.

Clinton emails. Trump calls global warming a Chinese hoax:   It IS a hoax!  It was a hoax perpetuated by, guess who?  The Clintons and Al Gore so they could get rich using the media to manipulate the narrative and spread lies about what is really happening!  There IS no global warming!  The planet has been in a process of cooling for 4.5 BILLION YEARS!

Clinton emails. Trump openly admits to not paying his employees during debate:  I watched all three debates, multiple times, and I have not seen this ONCE.  But, you know who has a hard time paying people?  Hillary Clinton and her husband!  Just ask the people of Haiti!

Clinton emails. Trump calls Obama an illegitimate noncitizen hundreds of times over 7 years:  And Hillary was the one who GAVE HIM the information on this when she was the person who started the Birther Movement in 2008!  It was HER research that the birthers used to prove their point!  Again, accusing Trump of EXACTLY what Hillary has done and has been doing!

Clinton emails. Trump uses campaign donations to enrich his own businesses:  Again!  Accusing Trump of doing what Hillary and Bill and Al Gore and the ENTIRE Democrat and Political elite have been doing for decades!  Trump has used his OWN cash to fund his campaign, and matches donations dollar for dollar of his donors.  He also refuses to take a salary as president.

Clinton emails. Trump says Ted Cruz involved in JFK assassination unironically citing National Enquirer:  There is actual evidence that would allow for the speculation that Ted Sr was Oswald’s Cuban contact in the plot to assassinate Castro.  There is photographic evidence that shows Ted Sr and Oswald together.  (And “unironic” is not a word…)

Clinton emails. Trump says laziness is an inherent trait in black people:  No, it was Hillary Clinton in her EMAILS that called black people derogatory names.  The Democrat party that she is the leader of has a long standing history of oppressing and using black folk, and people like Charles Evers, brother of assassinated Civil Rights activist Medgar Evers and the first Black Mayor of a Mississippi city and REPUBLICAN, knows this and has endorsed Donald Trump.

Clinton emails:  Let’s talk about the Clinton emails for a second.  This is documented proof of racketeering, fraud, rigging elections, rigging televised debates, supporting ISIS, racism, Hillary’s bad hygiene, not protecting classified information and top secret data, and also very likely a pedophile sex ring in which Hillary and Bill were major players in.  This is EVIDENCE, not conjecture.  Not speculation.  Not “allegations with no proof”; this is the sort of stuff that gets the FBI and the NYPD in a frenzy to gather information to make an indictment before there is a possible constitutional crisis after the election is over.  These emails are a bigger smoking gun than ANYTHING in Watergate (an investigation that Hillary Clinton was THROWN OFF of for unethical behavior), and the collusion of the media and the DNC and Hillary Clinton Campaign to cover up this stuff is exactly what trump, and many of us, are talking about.  The emails prove that the corruption is deep, and it spreads out over a wide spectrum of powerful people.   If this was ANY other person, they would be convicted for Treason, Racketeering, Fraud, and so many other charges.  But since she has complete control of the media and has the safety net of the DOJ, she is still not behind bars…yet.