Hillary Clinton says She is Above the Law 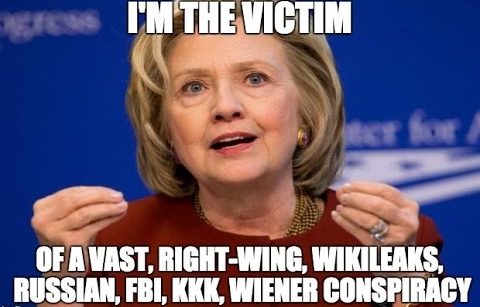 Hillary said, “You know I regret deeply that this appears to be a politicization of our justice department and our justice system.”

No, it’s not.  What Obama did with IRS targeting the TEA Party, abortionists persecuting Christians, and spying on the Trump Campaign was!  Since when is Hillary Clinton above the law?  Since when is the government investigating a possible crime an “abuse of power?”  Since when is a Special Counsel investigation of a crime a violation of Constitutional rights?

The answer is; since Mueller was appointed to investigate Trump with no crime being named, no parameters to his investigation, and no restraints into how he conducted his investigation into Trump and everyone involved with him!  What is nothing less an actual witch hunt, Mueller is searching through Trump’s past and all people associated with him for any crime with which to charge them in order to find something with which to impeach Trump.  If this is how the Swamp Rats believe they can relieve themselves of this troublesome citizen who was elected by the people to go to Washington to clean out their corruption they’ve got another thing coming!

When Democrats accused Trump of colluding with Russia to steal the election he called for the appointment of this special counsel to investigate that.  He did not give them the right to investigate his business dealings and that of all his associates.  This is an abuse of Democrat’s power.  Trump can elect to do this because he knows he is innocent of any wrongdoing, that there is no collusion and no crime.  On the flip side, when Hillary is accused of colluding with Russia to sell them America’s uranium, why isn’t she calling for a special counsel to herself to investigate her dealings and the Clinton Foundation?  Instead she is damning any consideration of such an investigation.  Why?  The answer is obvious.  Innocent people don’t mind being investigated, while guilty people do not want to be.

Speaking of which, that brings us back to Judge Roy Moore and the mounting accusations against him.  True to Rush Limbaugh’s prediction, when he didn’t fold after the first charges they kept on coming getting bigger and better until the latest woman accused him of raping her.  Don’t pay attention to the fact that the parking lot behind her diner to which she said he took her has never existed.  Funny how all these women wait forty years to come forward.  Obviously the good ol’ boys network kept them oh-pressed.  Not like the women in Hollywood who have been free for decades to expose the perverts there.  Speaking of which, the leftwing media has said Harvey & Co. can be redeemed for being sexual predators all their lives, but Trump can never be forgiven for his locker room man talk.  How generous and Christian of them to offer forgiveness for their own perverts but not for godly men of the Republican Party.  Can you say two-faced leftists?

Swamp Rats say they vote for Trump’s agenda, but that agenda is not being faithfully delivered.  The GOP has been promising repeal of ObamaCare, but are instead looking at making Obama’s illegal subsidies law.  The GOP promised tax cuts, but instead is looking at cutting taxes for the Middle Class while raising them elsewhere.  The GOP promised to make the economy grow, but so far their efforts have all stifled the tax reforms Trump, and every businessman, knows will help stimulate the economy.  The GOP promised to secure the borders and stop illegals, but instead sit on their hands as Democrat judges file motions to force the borders to stay open and taxpayer money to fund sanctuary cities.  It is obvious it will take several election cycles to even begin cleaning out the swamp.  But if they can crush Moore and stifle Trump then the Thomas Jefferson solution may be the people’s only hope to stop the socialist takeover of America.