Hillary Flashback: “Islam is not Our Adversary, Muslims are Peaceful and Tolerant” 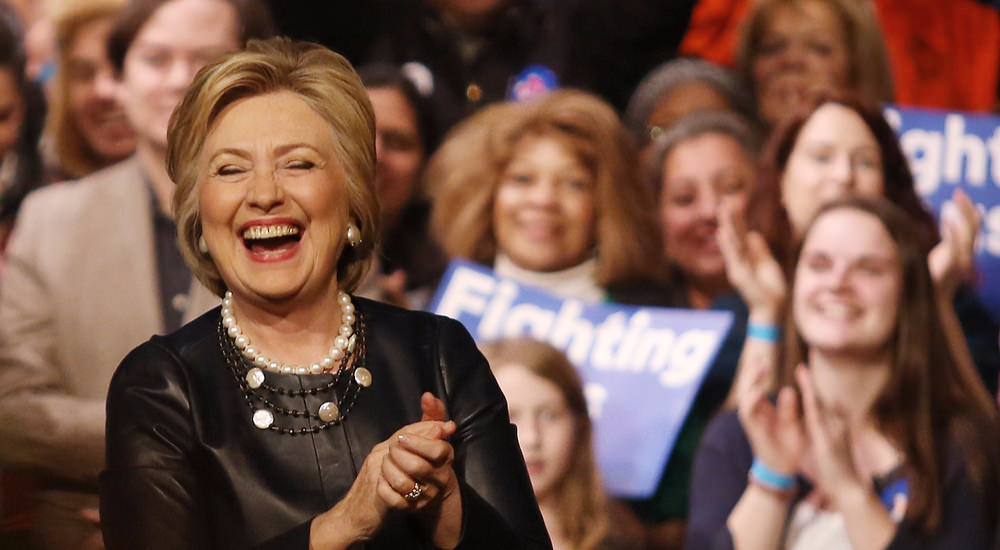 ” … a little folly outweighs wisdom and honor. The heart of the wise inclines to the right, but the heart of the fool to the left. Even when fools walk along the way, they lack wisdom and show everyone that they are fools.” Ecclesiastes 10:1-3

Hillary Clinton does not inspire confidence in most Americans, when she speaks of combating terrorism, the likes of which the American people recently witnessed over the past few weeks in Minnesota, New Jersey and New York, that left dozens of people seriously wounded. Her policies will be a continuation of the same weak, ineffectual, ineffective, cowardly, idiotic and treasonous policies of Obama and his band of Leftist fools, who have created this environment that is amenable to terrorism. And despite her assurances that she has a “comprehensive plan” to combat terrorism, she offers only a mirage and every thing else other than a genuine and concerted effort to defeat the Islamic jihadi terrorists that now freely roam the streets of America.

On a daily basis, Hillary makes it quite clear that she cares more about Muslims’ sensitivities than American lives, especially when she remarks [last November]: “Islam is not our adversary. Muslims are peaceful and tolerant people and have nothing whatsoever to do with terrorism.”

Shortly after the terrorist attacks on September 17th and 18th, White House press secretary Josh Earnest declared, “We are in a narrative battle … We can’t play into this narrative that somehow the United States is fighting Islam.”

Then who are all these terrorists screaming “Allahu Akbar” as they detonate bombs in Boston and New York _ who have tortured, raped, imprisoned, murdered and burned alive millions of victims worldwide?

The enemy is Islam and devout Muslims following the violent ideology that is central to Islam, mandated by their “prophet” Mohammed, which is a supremacist ideology of permanent conflict and conquest that denies the legitimacy of any other belief system. Exponents of this ideology are Islamic states such as Iran, Saudi Arabia and Pakistan, groups like the Islamic State and Al Qaeda and self-starting Islamofascist terror cells found in any country with a sizable Muslim immigrant population, including America.

Why should America keep flirting with death by terrorism by keep our doors open to Muslims?!?? So many have hid within our society as “peaceful and tolerant” Muslims, until they committed their heinous acts of terror against our homeland.

There exists more than enough Muslims in America, Europe and the Middle East, who adhere to the violent commands of Mohammed in the Koran and the Hadith (Verses of the Sword), clamoring for the destruction of the United States to warrant an immediate ban on all Muslim immigration. Now that we also witness an increasing number of second and third generation U.S. Muslims and Muslim immigrants with permanent residence visas mounting attacks against America, our counter-terrorism experts in the FBI and intelligence groups must have their hands untied to go after the Islamic mosque leaders who preach hatred of the Western world and America.

Americans could never expect this sort of strong action from the Obama administration — the administration that ordered a cleansing of training materials and law enforcement manuals that were deemed offensive in 2011 by the Islamic Society of North America and the Council on American Islamic Relations. This is treasonous, once one understands the large number of terrorist ties found within these groups. Hillary, who was part of Obama’s policy failure that allowed the growth of Islamic terrorist groups globally, is highly unlikely to diverge too far from this idiotic and treasonous path.

One should also note that Hillary Clinton, as Secretary of State, supported the terrorist organization of the Muslim Brotherhood throughout the Middle East and the United States; she refused to designate Boko Haram as a foreign terror organization, which allowed it time to become entrenched in Nigeria and expand, murdering over 20,000 people and displacing two million. She is also in agreement with Obama’s feckless and foolish Iran Nuclear Deal, which simply guarantees that Iran will become a dangerous and nuclear armed foe in the Middle East.

Eroding confidence in this administration even further, one must wonder if a Hillary Clinton progressive Secretary of Homeland Security will perform any better than Jeh Johnson. It recently came to light in the aftermath of the September attacks, that 858 illegal aliens from “special interest countries”, known to commit immigration fraud and export terrorism, were “mistakenly” given U.S. citizenship. Discrepancies between their names and birth dates weren’t caught because their fingerprints were missing from the DHS database, according to an internal audit released on September 19th.

Hillary will have many of this same band of Leftist fools in her administration, who promised a “robust” vetting of all immigrants. Their miserable failures to date demand their replacement with real security experts, capable of protecting America, and Heaven forbid we offend the sensibilities of Muslims, while Americans lie dying in our streets by their hands.

The Washington Times (David Boyer) quoted Donald Trump on the series of terrorist attacks: [These attacks] “should be a wake-up call for every American … The safety and security of the homeland must be the overriding objective of our leaders when it comes to our immigration policy … that’s why I’ve proposed extreme vetting for immigrants from troubled parts of the world where terrorists live and train, and [I] oppose Hillary Clinton’s 550 percent increase in the number of refugees from the conflict in Syria.”

According to David Inserra, a homeland security specialist at the Heritage Foundation, before the September 17th attacks, the United States was the target of eighty-nine Islamofascist terror plots and attacks since 9/11 and twenty-five since January of 2015.

Whether here in America or abroad, every U.S. administration from this day forward must have leaders willing to defeat Islamic terrorism by hunting down the terrorists and killing them, wherever we find them. Any presidential candidate unwilling to vigorously advance this policy does not belong in the White House: Terror can only be broken by terror.

America cannot trust Hillary Clinton, who lacks noble courage and knowledge, to protect our freedom and our people against the tyranny of Islam, or any enemy, with the world drowning in  chaos due to her policies as Secretary of State. She still proposes to flood America with Muslim “refugees”, whose ranks are certain to be filled with Islamic jihadi terrorists sworn to kill Americans in the name of the “prophet” Mohammed. Her progressive passive appeasement of Muslims and her practice of placing her interests and Democratic Party interests over U.S. interests, along with her willingness to lie to the American people — witnessed through her false claims about Benghazi, enabled the Islamic State’s growth and its ability to reach inside the U.S., with ruinous and deadly consequences.

And, when the “three o’clock in the morning phone call” came in from Benghazi, Hillary CHOSE to abandon Americans to thirteen hours of combat and their deaths: Hillary Clinton is unfit to be the Commander-in-Chief.