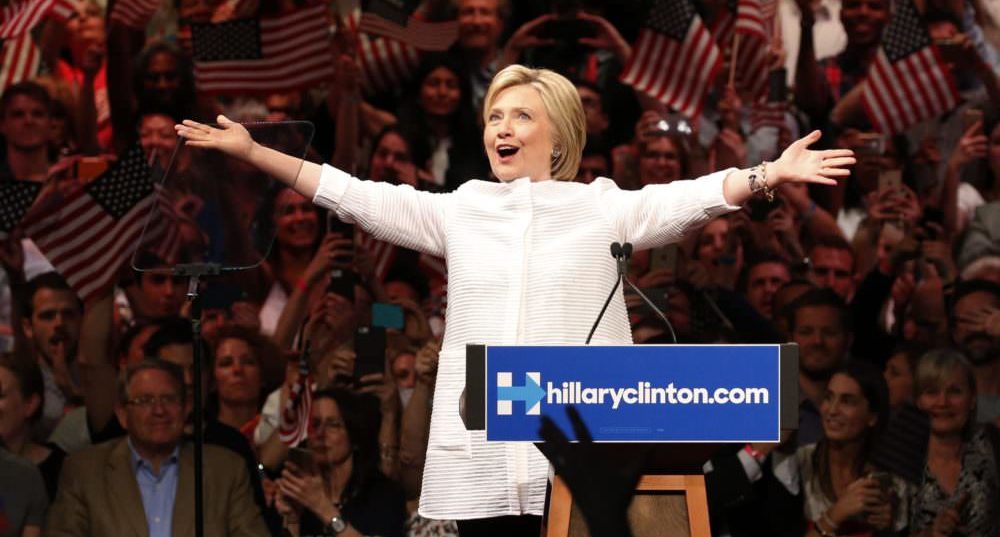 Hillary Clinton  looked pretty pleased with herself on stage after locking down the Democrat nomination this past Tuesday night. In fact, she was so happy that she immediately began to crow about how much better of a President she’d be then her likely GOP opponent Donald Trump.

In her victory speech, Clinton argued that American voters should stay away from Donald Trump because his campaign slogan, “Make America Great Again” was a subtly phrased code that actually meant “take American backwards.” Yes, while trying to prove her superiority to Trump she instead argued that  a large portion of Americans were backwards for supporting Trump’s policies.

“It may be hard to see tonight but we are all standing under a glass ceiling right now. But don’t worry. We’re not smashing this one. Thanks to you, we’ve reached a milestone. The first time in our nation’s history that a woman will be a major party’s nominee.”

“Tonight’s victory is not about one person. It belongs to generations of women and men who struggled and sacrificed and made this moment possible…

“In our country, it started right here in New York, a place called Seneca Falls, in 1848, when a small but determined group of women and men came together with the idea that women deserved equal rights.

“So we all owe so much to those who came before, and tonight belongs to all of you.

“We believe that we are stronger together and the stakes in this election are high, and the choice is clear. Donald Trump is temperamentally unfit to be president and commander-in-chief.

“He is not just trying to build a wall between America and Mexico. He is trying to wall of Americans from each other. When he says let’s make America great again, that is code for let’s take American backwards.”

If you can stomach it, you can watch her full speech below: