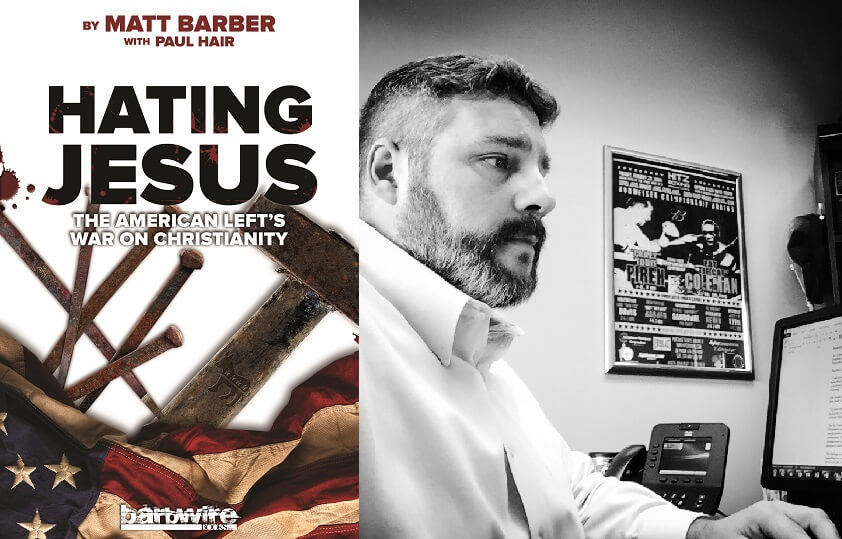 Lynchburg, VA — Matt Barber’s fiery new book, Hating Jesus: The American Left’s War on Christianity, published by BarbWire Books, first reveals how secular progressives are waging an unrelenting fight against Christianity in America, and then explains what Christians can do about it. BarbWire Books released this timely book in both paperback and Kindle version through Amazon on May 23, 2016.

In Hating Jesus, Matt Barber documents how American leftists have co-opted every elite institution: schools, government, the media, Hollywood and the arts, many conservative organizations, and even much of what passes for the Church in America. With growing power, the progressive movement wages its relentless War on Christianity—and they are winning. The ultimate goal? Conform to their pagan demands, or face financial ruin or even incarceration.

Even so, there remains good news. With Christ, it’s never too late to win this escalating war.

Todd Starnes of Fox News raves about Barber’s new book. He thinks Matt is right on target: “In Hating Jesus: The American Left’s War on Christianity, Matt Barber delivers a masterful blow-by-blow investigation of how the Left sucker-punched people of faith,” Starnes says.

David Limbaugh, attorney, best-selling author and brother of talk radio megastar Rush Limbaugh, agrees: “In his ‘must read’ book, Hating Jesus, my friend Matt Barber persuasively argues that anti-Christian facets of the organized Left have placed the Christian faithful squarely in their crosshairs. Accordingly, Matt … provides a realistic and effective action plan [to fight back].”

Hating Jesus: The American Left’s War on Christianity from BarbWire Books is essential for anyone interested in current events and where the United States is headed.

Matt Barber is Founder and Editor-in Chief of BarbWire.com. He serves as Associate Dean with Liberty University School of Law, is an attorney concentrating in constitutional law, and holds both a Master of Arts in Public Policy and Juris Doctor from Regent University.

He also is an author and a popular columnist, and publications such as WND, Townhall,CNSNews, Charisma News, The Stream, OneNewsNow, TheBlaze, The Washington Times and many more regularly run his weekly column. Author of the previous book, The Right Hook: From the Ring to the Culture War, Barber is also penning his first novel.

In addition to frequent public speaking engagements, Matt has appeared as a cultural analyst on the Fox News Channel, MSNBC and CNN, and is a regular guest on dozens of talk radio programs and networks, including Michael Savage, American Family Radio, Dennis Prager, the Michael Medved Show, and the Janet Mefferd Show. Matt also co-hosts “Faith and Freedom,” a daily legal and cultural issues talk radio program hosted by Mat Staver, provided by Liberty Counsel, and heard on dozens of radio stations across the country.

Matt’s project partner, Paul Hair, writes fiction and nonfiction. He writes under his own name and works with other authors behind the scenes.

He is a creator at Liberty Island, a webzine featuring authors of novels and short stories. His books, Mortal Gods: Ignition and Winning through Losing, are available at Amazon.com.

To contact Matt Barber for an interview: [email protected]

To contact Paul Hair for an interview: [email protected]

To order a review book (media) or for volume discount: [email protected]