Her Hands Are Dirty! Proof She Deleted Her Own Emails! 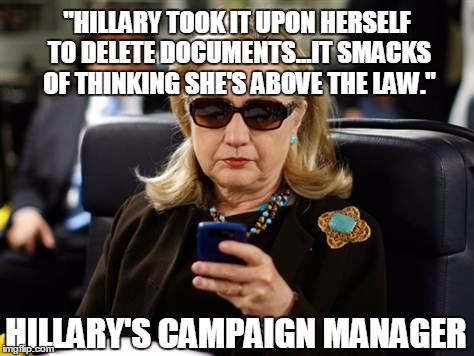 In today’s latest round of Wikileaks email leaks from the Hillary Clinton campaign, definitive proof was found which reveals Hillary Clinton knowingly and deliberately deleted the emails being investigated by the Department of Justice. As seen here, the original email proves, clearly and obviously to anyone willing to read the email, that Hillary Clinton obstructed justice and removed evidence requested by the Federal Government.

In email # 7011 from John Podesta the Chairman of Hillary’s Campaign for President:

“I know when I talk to my friends who are attorneys we are all struggling with what happened to the emails and aren’t satisfied with answers to date. While we all know of the occasional use of personal email, addresses for business, none of my friends circle can understand how it was viewed as ok/secure/appropriate to use a private server for secure  documents AND why further Hillary took it upon herself to review them and  delete documents without providing anyone outside her circle a chance to  weigh in. It smacks of acting above the law and it smacks of the type of thing I’ve either gotten discovery sanctions for, fired people for, etc.”

Hey Mr. FBI Director James Comey, maybe you haven’t had a chance to see this yet – I think we can all see the “intent” in pressing the “delete” button. The email seen here is criminal evidence of Hillary Clinton’s clear and obvious intent to defraud the American people and cements her place, with clear undeniable proof, as a common criminal.

It is now imperative for Donald Trump to publicize, throughout whatever means necessary given the mainstream media’s complicit misbehavior, this latest revelation to the American people. If he’s going to recover from a disastrous last week, he needs to reduce Hillary’s base in much the same way the “locker-room talk” video has reduced his.

You may be able to prove he’s a sexist. You can now definitely prove she is a criminal.