Russian intelligence officers injected malicious codes and then ran commands to extract information. Trump was aware and utilized it to his benefit. If this is not interfering into American politics and Treason, what is? The Trump gullible believe he is a patriotic president, while the world is well aware of his ties to crime families, and enemies of America. True to Trump’s form, The Trump campaign “expected it would benefit” from Russian hacking efforts. And Trump did. He never would have won in 2016 if it were not for the interference of Russia. If you are one that still supports Trump, 73% of America pities your ignorance.

The Mueller investigation identified numerous links between the Russian government and the Trump Campaign. The investigation established that the Russian government perceived it would benefit from a Trump presidency and worked to secure that outcome and that the Campaign expected it would benefit electorally from information stolen and released through Russian efforts. There is no way to sugar-coat the obvious, that treason was committed by the Trump Campaign and Donald J. Trump.

So the propaganda began at the podium and ran like water down the aisles to the easily manipulated Trump Supporters. White House Press Secretary Sarah Huckabee Sanders admitted to the special counsel’s investigators that she lied from the podium. Sarah admitted lying to the American citizens. Nothing can now be accepted as truth from the Trump office.

Trump, trying to cover-up the truth ordered his White House counsel Don McGahn to fire Mueller in 2017, but McGahn refused. “Upon hearing news on July 14, 2017, that the special counsel’s office was investigating him for obstruction of justice, Trump reacted to the news with a series of tweets criticizing the Department of Justice and the Special Counsel’s investigation.” Three days later, he “called McGahn at home and directed him to call the Acting Attorney General [Rod Rosenstein] and say that the Special Counsel had conflicts of interest and must be removed.” This is clear evidence of the attempt to cover-up illegal activity.

Trump made an attempt to get his former Attorney General to shut down the investigation. Almost immediately after issuing his directive to McGahn, Trump issued an order to adviser Corey Lewandowski to tell then-Attorney General Jeff Sessions to limit the scope of the Russia investigation “to prospective election-interference only.” Cover-ups and illegal dealings, but the tripe that follows Trump are blind to the reality of the crimes.

Trump considered installing Rachel Brand, then the Department of Justice’s number three official, to spearhead the Russia probe. Trump directed Porter to ask Brand about the position. Porter did not do so because he was “uncomfortable with the task,” according to the report. “In asking him to reach out to Brand, Porter understood the president to want to find someone to end the Russia investigation or fire the special counsel, although the president never said so explicitly.” Even the ignorant fools who accepted positions within a cabinet full of criminals had personal limits to their exposure.

Failure, a signature move of Trump’s shown its filthy head again. Another attempt to control McGahn also failed when Trump attempted to get McGahn to walk back the story. In early 2018, the press reported that Trump had ordered McGahn to fire Mueller. Trump attempted to get White House officials “to tell McGahn to dispute the story and create a record stating he had not been ordered to have the Special Counsel removed.” McGahn refused, telling officials that these reports were “accurate.”

The description of Trump’s reaction to the appointment of Mueller as special counsel in May 2017. President Trump’s response to learning that Mueller had been appointed by then-Acting Attorney General Rod Rosenstein to investigate Russian interference appears at odds with his repeated denunciations of the investigation as a “witch hunt.” The report incorporates notes written by Jody Hunt, the chief of staff of then-Attorney General Jeff Sessions. “Oh my God. This is terrible,” Trump said. “This is the end of my Presidency. I’m fucked.” He later added: “Everyone tells me if you get one of these independent counsels it ruins your presidency. It takes years and years and I won’t be able to do anything. This is the worst thing that ever happened to me.” Trump then reprimanded Sessions, demanding: “How could you let this happen, Jeff?” The blame Trump attempted to place upon Sessions so that he, Trump would look like a golden night. The only golden is the color of the white sheets in the piss soaked hotels in Russia! 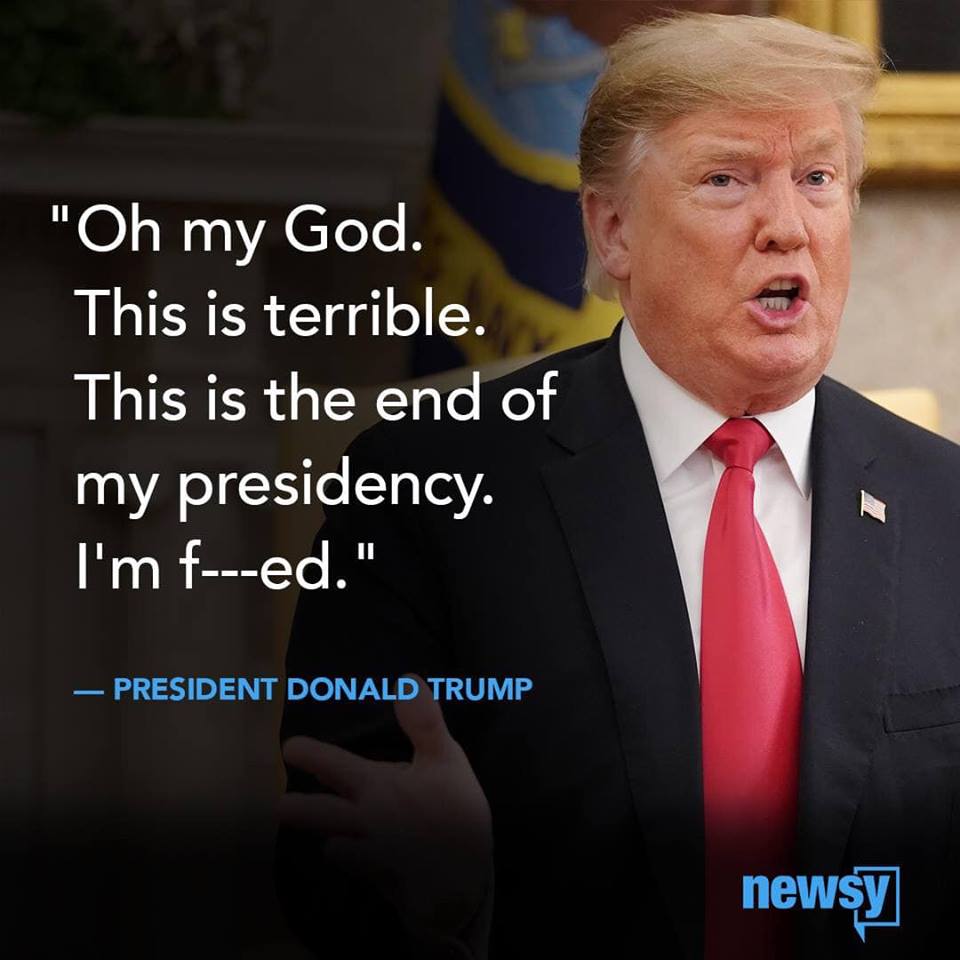 Time after time, from Michael Flynn to Betsy Devos’ brother attempting to finance to gain the emails of Hillary Clinton, hoping this would take the pressure off Donald J. Trump and his treason committed crimes.

While Trump believes that he has a super Nova Brain, The special counsel’s investigators concluded Trump intended to obstruct the probe when he tweeted support for Paul Manafort, his former campaign chairman. “Evidence concerning the President’s conduct towards Manafort indicates that the President intended to encourage Manafort to not cooperate with the government,” the report stated. “Before Manafort was convicted, the President repeatedly stated that Manafort had been treated unfairly. One day after Manafort was convicted on eight felony charges and potentially faced a lengthy prison term, the President said that Manafort was “a brave man” for refusing to “break” and that “flipping” “almost ought to be outlawed.’ ” The SuperNova is more a black hole.

Mueller’s Report goes on to state:

“[James] Comey did not end the investigation of [Michael] Flynn, which ultimately resulted in Flynn’s prosecution and conviction for lying to the FBI. [Don] McGahn did not tell the Acting Attorney General that the special counsel must be removed but was instead prepared to resign over the President’s order. [Corey] Lewandowski and Dearborn did not deliver the President’s message to [Jeff] Sessions that he should confine the Russia investigation to future election meddling only. And McGahn refused to recede from his recollections about events surrounding the President’s direction to have the special counsel removed, despite the President’s multiple demands that he do so. Consistent with that pattern, the evidence we obtained would not support potential obstruction charges against the President’s aides and associates beyond those already filed.”

Mueller’s office sought to interview Trump for more than a year, but he refused to do so voluntarily. “Beginning in December 2017, this Office sought for more than a year to interview the President on topics relevant to both Russian-election interference and obstruction-of-justice.” All attempts by the special counsel’s investigators to interview President Trump were rebuffed despite the special counsel office “had carefully considered the constitutional and other arguments raised by counsel… and they d[id] not provide us with reason to forego seeking an interview.” Another blatant attempt to cover-up illegal activity.

“The evidence we obtained about the president’s actions and intent, presents difficult issues that would need to be resolved if we were making a traditional prosecutorial judgment. At the same time, if we had confidence after a thorough investigation of the facts that the president clearly did not commit obstruction of justice, we would so state,” the report states. “Based on the facts and the applicable legal standards, we are unable to reach that judgment. Accordingly, while this report does not conclude that the president committed a crime, it also does not exonerate him.” This is the most damning conclusion any investigator or prosecutor could state that shows just cause of illegal activity by the “Ring Leader”.

Mueller concluded that the Constitution does not shield Trump from obstruction of justice charges. “The Constitution does not categorically and permanently immunize a president for obstructing justice,” according to the report, signaling that Congress has the power to act upon reviewing the report’s contents. “The conclusion that Congress may apply the obstruction laws to the president’s corrupt exercise of the powers of the office accords with our constitutional system of checks and balances and the principle that no person is above the law,” the report continues, in direct opposition to the Trump camp’s argument that Congress lacks the authority to intervene. This is known as impeachment and prosecution for obstruction.

With the wimpy approach that Sessions showed, cowering down to Trump, he did manage to protect his own ass. White House counsel Don McGahn and other aides made numerous attempts at President Trump’s behest to convince Sessions not to recuse himself from the Russia probe. Questions about whether Sessions should recuse himself erupted after a Wall Street Journal report revealed that Sessions used funds from his Senate re-election campaign to cover travel expenses for the 2016 Republican National Convention in Cleveland, where he met with Sergei Kislyak, who was then the Russian ambassador to the United States. The news that Sessions met with Kislyak directly contradicted a White House statement that Sessions was not acting on behalf of the campaign at the time.

These are a few of the damning out-takes from the Mueller report. Can you imagine the full scope of the whole investigation, and what it means to America, and to Freedom?