The IT guy and the L’il Debbie Onion 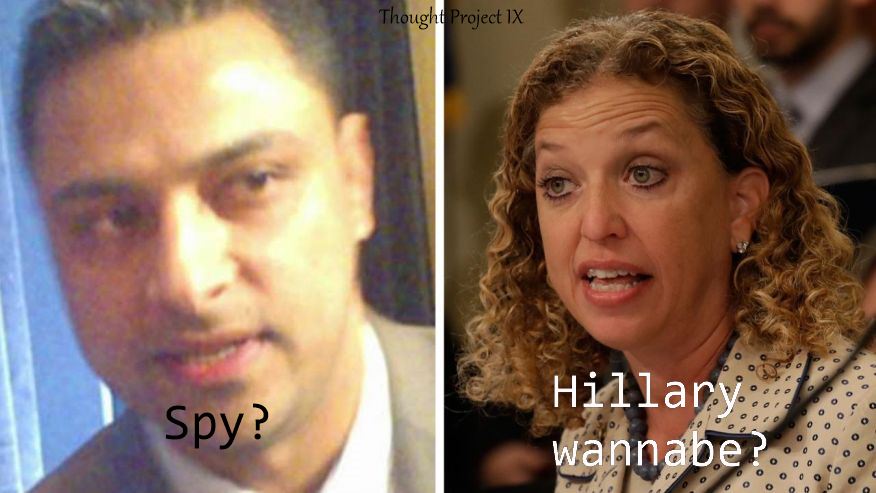 This story broke, such as it was, in late feb. of this year but except for some alternative sources received next to no media attention. Imran Awan, his wife Hina Alvi, Abid Awan, Jamal Awan, and Rao Abbas came under criminal investigation by the Capitol Police.

According to Heather Caygle in Politico article on 3/1/17:

“The five current and former House staffers are accused of stealing equipment from members’ offices without their knowledge and committing serious, potentially illegal, violations on the House IT network, according to multiple sources with knowledge of the probe.“

Although the five were “shared employees” the principal employers were Debbie Wasserman-Schultz D-Fla., Gregory Meeks D-NY, and Marcia Fudge D-Ohio, but they worked for numerous other Dem. Lawmakers. Meeks, who is the one who first to bring Awan in as an IT is reportedly a good friend of both Awan and his wife. All but Imran Awan were let go from their duties and denied IT access. Awan was defended by Meeks who said that him being a Muslim with ties in Pakistan made him an easy target and that he did not believe the charges, but the firings were because the investigation was interfering in the day to day operations. Imran, however, was kept on staff by Wasserman-Schultz in an “advisory” capacity until this week. The day after he was picked up by the FBI at an airport trying to flee to Pakistan and charged with bank fraud (another layer of this onion) Wasserman-Schultz fired him. The FBI raided his house and seized several hard drives that had been smashed

According to multiple sources he and his wife received about $4 million for their services. That’s high pay for an IT. His wife and child had already left the country for Pakistan. She was found to be carrying $10 thousand dollars on her. Awan had also wired over $50 thousand to Pakistan on the pretext of buying real estate. The contacts he has in Pakistan are alleged to be affiliated with the Muslim Brotherhood.

The group, besides supplying IT services to the Congressmen, were involved in several shady real estate deals including a car dealership that ultimately suffered from financial problems. For making all that cash off the American taxpayers, Imran seemed to continually have money problems. He was reportedly in debt of a substantial amount to a member of Hezbollah. The bank fraud charges he is being held on stems from him trying to get a loan on a house that was not his primary residence. Other charges are surely pending, including possibly, espionage.

Wasserman-Schultz stuck her foot in a little deeper when, during an appropriations meeting, threatened the head of the Capitol Police, to his face, of “consequences” if he did not return a laptop confiscated in the investigation. The laptop was properly seized as it was material evidence in an ongoing investigation and as such will be held until the conclusion of the investigation and any ensuing trial. The threat of “consequences” could be read to mean withholding funds for the Capitol Police budget. This would most probably come under the heading of obstruction of justice.

Scandal is no stranger for Wasserman-Schultz as sshe was forced to resign from her position as chair of the DNC after Wikileaks revealed her collusion to deny Bernie Sanders the nomination during the Democratic primary. There are rumors surfacing that Awan was used by Wasserman-Schutz in that scam. Maybe that’s why the DNC didn’t want the Feds rooting around in their server. How she got the position of the DNC chair is a layer of the onion I will not document here, but it was pretty sketchy.

Adding to the onion, the DNC is currently being sued, mostly by Bernie supporters and donors over the rigging of the primary. One witness, Sean Lucas (a process server) has already died of an alleged drug overdose, and another possible witness, Seth Rich, a victim of an unsolved shooting. This has prompted the plaintiffs to ask the court for protection. This request has so far been denied. This trial is taking place in Miami, Wasserman-Schultz’s district. Jarrod and Elizabeth Beck, a husband and wife lawyer team representing the plaintiffs have reported a strange phone call to their office asking for information on the case. A Google search showed that the call originated from Wasserman-Schultz’s Fla. Office.

“Klaus Eberwein, a former Haitian government official who was expected to testify against the Clinton Foundation. Unfortunately for Eberwein he is now dead.

Eberwein had been vocal about the Clinton Foundation corruption. However not long ago Eberwein was found dead in a Miami motel, a gunshot wound to the head.”

The only connection to Wasserman-Schultz may be that they were found in her district, but it is interesting. And all of this has taken place in a near media blackout.

Then there’s the Fusion GPS angle. And, oh yeah. I don’t think little Debbie is sweating Awan’s trial too much. After all, her brother is the Fed assigned to prosecute the case.