Is Gun Control a Realistic Answer? 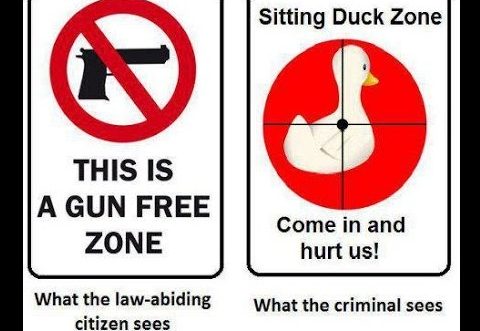 Once again, we are faced with confronting another mass school shooting. The reactions from both sides is predictable. There needs to be serious discussions on both sides of the aisle, and an answer found to how to minimize that horrible atrocities that take the lives of our children.

As a gun owner, I know that the weapons that I have are for the defense of my family and to put a stop to any confrontation that may occur. Firearms being used by countless millions in this country  responsibly are not the problem. Rahtrer it is those in our midst who have such alow respect for human life and the criminals that have respect for life or law. This is what must be stopped.

The media and progressive socialists who appear to think the only response is to take away everyones guns is so far out of the realm of sanity as to be laughable. Declaring that Republican have “blood on their hands” is a despicable response to what in actuality a complex set of issues that encompass the dangers that are faced. This does nothing to limit atrocities in the future and limits the opportunity to respond in a well reasoned compassionate way.

The mentality of those who are described as mass shooters shows mental illness has played a part. Tis subject is just starting to be discussed by reasonable people and is in itself a complex issue. Treating all people who own guns as mental deviates is not the answer. There needs to be a way found to be able to discern those who mental illness may be of a type that would preclude firearm ownership. But where is that line?

It is also informative that the mass shootings that have taken place have been in gun free zones. According to the Crime Prevention Research Center, 98.4% of all mass shootings from 1950 through July of 2016 took place in gun free zones. Gun free zones offer a path of least resistance, and are known to have no immediate response factor leaving mass shooters to complete the atrocity that had been preplanned precisely because there is no one there to stop them. Imagine a country where there was resistance allowed, and how many places would be open to the type of damage the criminal element of this country would be able to accomplish with any resistance.  The shootings over the past years in Florida-The Fort Lauderdale Airport, the Pulse nightclub, and now the Marjory Stoneman Douglas High school shooting have all been in gun free zones. More gun control would not solve this problem.

New York police Commissioner James O’Neill has called concealed carry reciprocity would be insane, not taking into account that concealed carry holders are highly law abiding citizens that follow the rule of law ,criminals do not.  Not allowing for law abiding citizens to conceal carry means that only the criminals that do not follow the law are the ones who are armed.

Florida has since passed concealed carry laws that allow law abiding citizens to conceal carry which has led to a decline in murder rates from 5.6 to 4.2 between 2007 and 2015. This fact was promulgated by the Crime Prevention Research center point out that the answer may be more guns and not less.  State figures from Texas show that the murder rate fell 50% faster than the national average which has been declining through out the country after concealed carry was passed.

Depending on local law enforcement is not the answer. The average response time by law enforcement  to these type of shootings in  many parts of this country can be up to a half hour. Handgun bans do not work, look at the Democrat controlled cities that have implemented a ban on handguns and the homicides rates that have exploded in those cities. It is the simple principle that if you ban handguns only criminals would have access to them. How does that make life safer for the millions of handgun owners who are law abiding citizens. In essence, it turns these cities into shooting galleries with no recourse for those citizens and no ability to feel safe, even in your own home.

Schools have been targeted specifically because they are gun free zones. A way to minimize these children being brutally murdered would be to train and arm teachers to respond to any threat. That of course will not even be discussed by any progressive socialist in the Democrat party. Another option which snowflakes will never allow is using retired military or law enforcement people to protect the entrance to the schools and limit entry. This has worked very well in Israel, but will not be discussed by those who are more concerned with the criminals rights, than those of the citizen that follows the rules and therefore make themselves targets. This would be the most cost effective way to have an immediate response to curtail the amount of damage being done.

Not being discussed in the mainstream media is the implementation and use of psychotic drugs being used in younger and younger children. Psychiatric medications have played alarge part in many of thes mass shootings. Most of the damage is being done by those on these medications of just stop taking them. The list is compelling. Eric Harris (Columbine), Patrick Purdy (Stockton),Kip Kinkel (Springfield OR),Laurie Dann (Winnetka, IL), Michael Carneal,  (Paducha ,KY)Jeff Weise (Red Lake Indian Reservation), Joseph Wesbecker (Louisville, KY), and others all were taking one of the many psychiatric medications that contain warnings that they may cause mania, anxiety, agitation, depression, paranoia, hallucination, abnormal thinking and are being given without any concern over the patients reaction and no follw up to attempt to mitigate these potential time bombs going off throughout this country. It is clear that the potential madness within the patients who take these medications is a push over the ledge and may be a leading cause of the heartbreak and damage done to families.

The pharmaceutical companies have settled many of these what they consider Public relations catastrophes in court, paying out millions.

Don Lemon from CNN, is one of the loudest voices for gun control without any facts. He tells those that attempt to discuss this challenge with him to shut up and that disagree with his opinion are deranged and lack any sense.  He pontificates that his morally superiority in the discussion is all that is needed and claims we need to keep guns from those who should not have them. How do you propose to come up with a foolproof way of doing that Donnie?

Does blaming Trump and lying about the change he made to an Obama administration mental health regulation on firearms. The change he made was to a regulation that was adopted in December 2016  was overturned by Congress a month later and was opposed by such groups as the National Council on Disabilities, National Consortium for Mental Health Recovery, and even the ACLU. What was overturned was that anyone on Social Security who needed  assistance with their finances were barred from owning a firearm, and could only challenge a government ruling after their guns were taken by the FBI.

In my next column I will discuss the lying media, Everytown and the celebrities who talk out of the hypocrisy they plan to foist on the American people.