A How-To-Guide to Drain the Swamp! 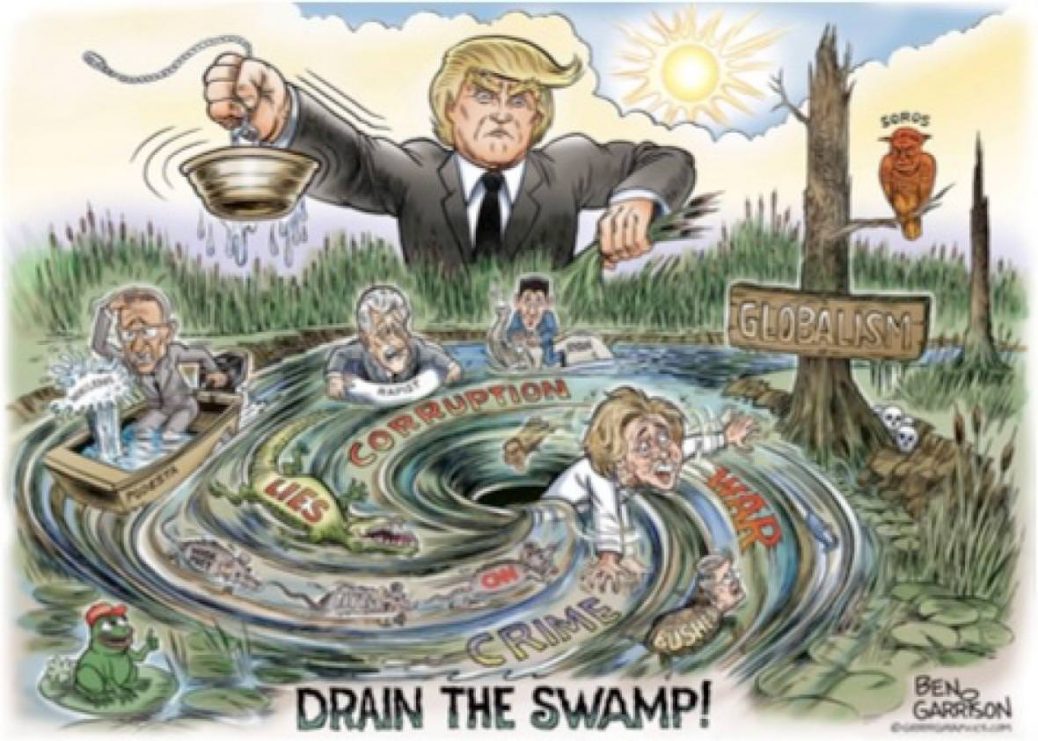 How Can Trump “Drain the Swamp” When He Cannot Say “You’re Fired” to Anyone in Washington?

There are actually two distinct groups of people in Washington who cannot be fired, which is practically everyone there. The first group is our elected representatives in the U.S. House and Senate. They can only be “fired” (in an election) by the people they are supposed to be representing, which rarely happens because most of the people in Congress have gotten really good at staying in office. The second group of people who cannot be fired is Federal Government employees. Theoretically they can be fired but it almost never happens because they are protected by the most powerful, and corrupt work place rules governing employee discipline imaginable. Federal Government department and agency heads, managers, and supervisors DO NOT have the authority to discipline, much less suspend or fire subordinates. If someone in a position of authority in our Federal Government wants to discipline, suspend or fire a subordinate they must refer the employee to a committee of their peers to investigate the “alleged” misconduct and make recommendations for actions that may be taken against the employee. The committee’s review and recommended actions are then forwarded to a mediator for a final decision on recommended disciplinary action. There are three problems with this process. First, it takes too long for the process to be completed. Second, during this long drawn out process the person making the “allegations” against the employee and requesting disciplinary action is almost always subjected to various forms of workplace harassment and “work slowdowns” by other Federal Employees who want to prevent any future employee referral’s for disciplinary action.  And third, the process rarely results in any recommendations for discipline of any sort because the process is corrupted at every level. For instance at least some of the people on the review committee will be people who are determined to maintain the status quo regarding Federal Government employee “job security”. Consequently Federal Government employees are rarely referred to a committee for disciplinary action.

Some time ago I actually watched the Head of the VA testifying before a Congressional committee regarding his total lack of authority to discipline, suspend or fire anyone in the VA. It was actually infuriating to watch politicians on both sides of the aisle putting on a loud show of indignation as they pretended they did not know that was the situation and insisting that they would do something to change the “Washington” work place rules responsible for this situation. The truth is that Congress is actually responsible for such ridiculous work place rules being a fixed part of the Washington “culture” so I will really be surprised if anything about this situation changes in the near future, but we did get Trump elected to the Presidency, so there is hope.

So here is how President Trump can “drain the swamp”.

> Second he can “request” the resignation of existing Federal department and agency heads throughout the Federal Government. Some will resist but some will comply allowing him to replace them with better business people.

> Third he can appoint strong, ethical, Constitutionalist to head all Federal Government departments and agencies with a mandate to “root out corruption” with referrals to the FBI for investigation and the DOJ for prosecution for criminal action. Note, this will be the first time in approximately 24 years that we will actually have a Department of Justice! Bill Clinton turned it into a “Department of Injustice” so he could use it to carry out his personal agenda items. President Bush could not fix it because 911 happened seven months and 21 days after he was sworn in. As a result the efforts to fight terror while rebuilding our intelligence service and national defense capabilities consumed all of Washington’s time and efforts throughout most of his two terms as President. And then Obama immediately elevated it to a “Department of Injustice” on steroids with every other Federal department and agency immediately following suit. As soon as President Trump appoints a new Attorney General and  Federal Government employees start getting prosecuted for criminal behavior, I feel certain that we will start to see some people in Federal government jobs begin to “clean up their act and others voluntarily resigning.

> Fourth, President Trump can begin to work with Congress on a serious Federal Government reorganization plan beginning with the elimination of the Department of Education.

Why do I think these four steps will begin to “drain the swamp” and continue at an accelerating rate? Because President Trump is a strong negotiator and the “mood” of the American electorate, which was initially visible in the 2014 mid-term elections and then made abundantly clear on November 8, 2016 sent a clear message to Congress that they want the “swamp drained” now!