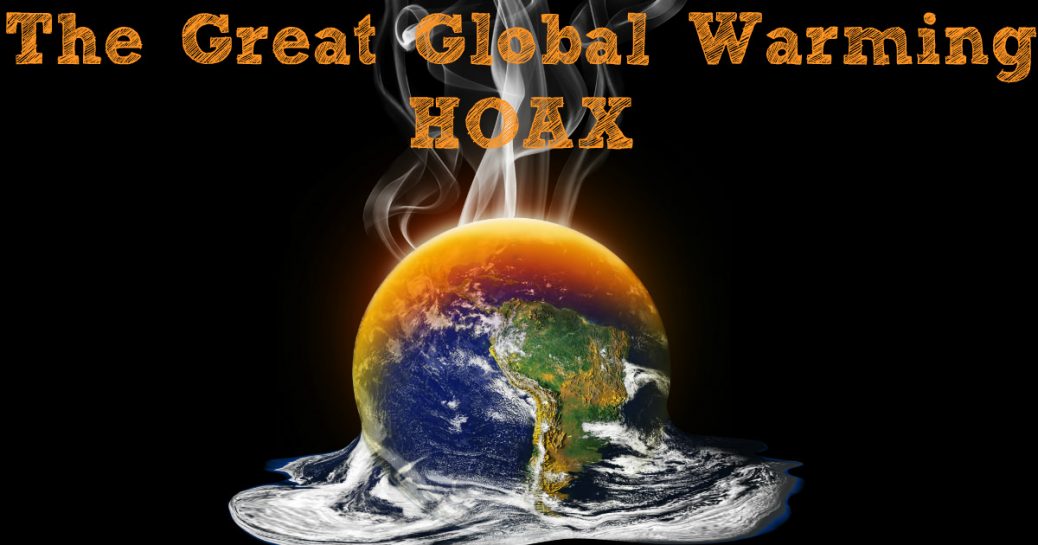 A hoax is a deliberately fabricated falsehood made to masquerade as the truth. Those who the hoax is geared toward are unaware of being deceived.

A hoax is often intended to provoke social or political change by raising people’s awareness of an issue such as in this case “global warming” or what is now commonly known as “climate change.” In the case of “climate change,” our government spreads false information and suppresses and manages the misinformation to give the desired impression they’re after. The suppression and mismanagement of [“climate change”] information is being carried out today by the mainstream media on behalf of the Left.

The latest hoax which is being performed on humans is that of “climate change.” I say “being performed on humans” because this hoax isn’t being perpetuated towards a particular country or race, a specific culture or society, or a certain gender or political group but on mankind, that is everybody on planet Earth; in 2016, 178 countries have been duped into signing the Paris Climate Agreement.

Outside of legislature, the governments have enlisted the MSM and “climate change” scientists to help promote this hoax on a grand scale. For those who deny “climate change” or even question it, they are publically shamed on social media and in some instances beat down.

Often, the reason for disbelieving in man-made global warming seem to be political rather than scientific; eg – “it’s all a liberal plot to spread socialism and destroy capitalism”. But even if “climate change” wasn’t a political issue, and it is these people can’t be looked at as being truthers or conspiracy theorists because of our governments past actions. Such actions include the WMD debacle of President George Bush’s presidency or President Barack Obama’s “Operation Fast and Furious” sting operation.

Let’s look at the mantra a little closer, how did they come up with the statistic of “97% of ‘climate change’ scientists agree?” We can thank John Cook, a research assistant professor at the Center for Climate Change Communication at George Mason University for this misleading stat. Cook oversees Skeptical Science (SkS), (along with a global team of volunteers) a non-profit science education organisation.

Skeptical Science came about when Cook heard a speech by U.S. Senator James Inhofe in 2007 who claimed that global warming was a hoax.

In 2003, Cook lead-authored an award-winning paper, “Quantifying the Consensus on Anthropogenic Global Warming in the Scientific Literature” analyzing the scientific consensus on climate change which presented the “97%” stat. This paper was highly influential towards President Obama and U.K. Prime Minister David Cameron in which they cite on many occasions when discussing “climate change.”

Within 24 hours of publication, the paper was tweeted by President Obama’s and received MSM world-wide coverage. The paper has been downloaded 161,443 times and it continues to be cited in a wide range of scholarly journals.

In another paper, “Consensus on Consensus: A Synthesis of Consensus Estimates on Human-Caused Global Warming” 90%-100% of climate scientists “overwhelmingly agree” that humans are causing global warming. The Intergovernmental Panel on Climate Change (IPCC) agrees that “human influence has been the dominant cause of the observed warming since the mid-20th century” and some will go as far as to claim as far back as the beginning of the Industrial Age. Note how “man made” and “human-caused” is emphasized in this paper.

No doubt “Quantifying the Consensus on Anthropogenic Global Warming in the Scientific Literature” will be used to help pass the Paris Climate Agreement and boost the legitimacy of the Obama administration’s signature climate policy, the Clean Power Plan. French foreign minister Laurent Fabius, called [the Paris Climate Agreement] a “historic turning point” and the head of the U.S. Environmental Protection Agency, Gina McCarthy, echoed the minister’s remark when she said it was an “incredible achievement.” Indeed it is a “incredible achievement” to get 178 out of 195 countries (91%) to agree on a hoax.

There are two issues which are problematic, one being that Cook’s paper is peer-reviewed which means those who are academics believe the same thing Cook is passing off as fact. These left-wing professors will be indoctrinating future students into this perverse ideology of “climate change” in the future.

Secondly, many generations of higher education students will be forced-fed this false science because Cook co-authored the college textbooks Climate Change: Examining the Facts with Weber State University professor Daniel Bedford and coauthored the textbook Climate Change Science: A Modern Synthesis. Cook also authored the book Climate Change Denial: Heads in the Sand. It will only be a matter of time before this trickles down into public education, aka government-sponsored propaganda, err, education.