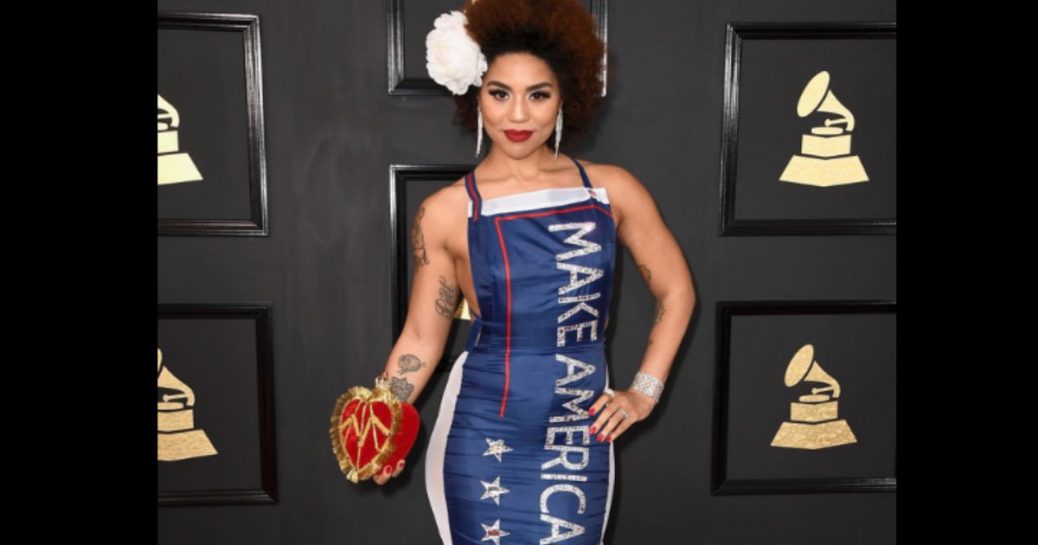 Singer/songwriter Joy Villa decided that she was going to make a statement when she walked down the red carpet at the Grammy’s tonight.

She showed up for the show ready to be noticed and wearing a “Make America Great Again” dress which immediately turned heads and made liberal brains snap.

Sometimes you just gotta be free to express yourself. ????✨???? thank you to all of my supporter… https://t.co/08AGXxG5zy pic.twitter.com/S286YuONhE

Things just got political. #GRAMMYs #joyvilla knows how to grab attention, wearing her support for @realDonaldTrump on #redcarpet pic.twitter.com/sZ6I3AkkvQ

Now, I won’t go about publishing the hate she received on Twitter and other social media platforms, but let’s just say that the consternation from the left was extreme. Villa’s social media accounts have been inundated with hate, but at least we know she won’t get that here.

Who is Joy Villa?

Who is Joy? True to the lyrics of her song “Vagabonds”, Joy Villa is a singer songwriter who’s never slowing down. Having lived in Hollywood, Seattle, Las Vegas, and now residing in NYC, touring extensively since 2012 to Asia, Australia the US and Europe.
Joy’s favorite genre has always been rock and roll, and she considers herself lucky to be a female that looks different than the normal “Rockstar”.  A classic renaissance woman, she also paints, models, acts, dances, composes poetry, and writes screenplays and books.
Joy grew up with an Italian father and an African American mother, blending two cultures to create a perfect mix. This “mixed life” outpours in her musical influences, listening to everything from Frank Sinatra to Diana Ross, to Blondie and Nirvana as a child.
Joy is a natural music and theater performer, discovering her knack for the stage at the age of 5, in her first theater musical. Joy loves writing songs and has collaborated on numerous projects around the world with producers and other artists.Joy blends alternative rock, electro pop, and a dash of hip hop into finely written tunes that aim to motivate, inspire, and get the juices flowing n her fans. Kinky, unexpected, vibrant, spiritual, and bold, Joy Villa is a true entertainer, and feels blessed to be giving her many global fans “The Joy Villa Experience”.

Make sure you go to iTunes, or Amazon music and give a little love for Joy Villa. Thanks Joy for making the Grammy’s just a little bit more enjoyable this year!