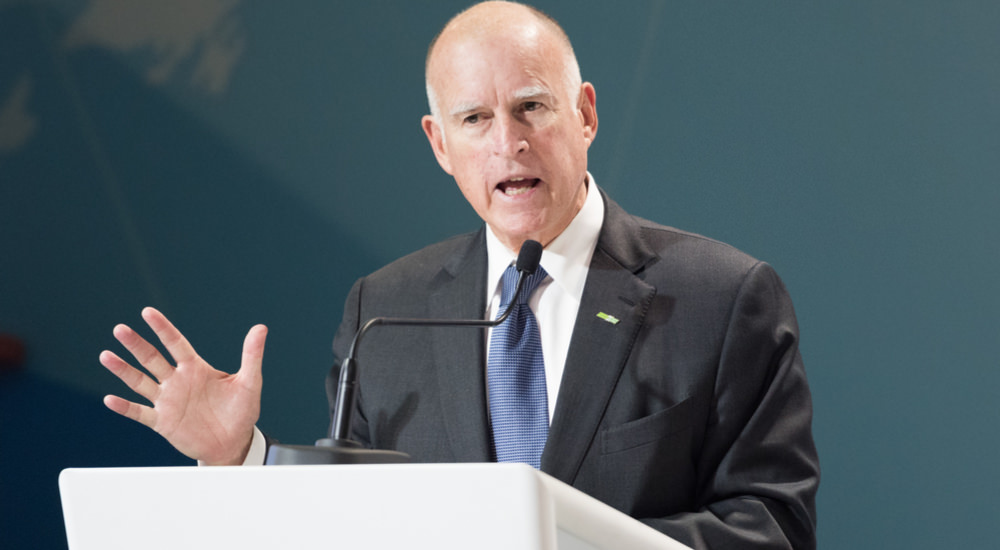 The one and only Governor Moonbeam of California has done it again. He now proposes changing “President’s Day” to…now get this….SOCIALIST DAY!!

This bill, AB-3042 is sponsored by Assemblyman Miguel Santiago, (no surprise here) a Sacramento Democrat.

Legislative analysis states that the bill would change California law, which now requires schools to close for two days in February–once in honor of George Washington, once for Abraham Lincoln–to combine the days for only one holiday in February.

This new free day will be made available for schools to close on May 1st in honor of…”International Workers’ Day.” So they have dropped a day to honor Washington or Lincoln to honor international socialism. And is to be remembered that May 1st is a day still honored by Communists world wide.

This stupid butt (last word substituted for the more advanced description) bill has, of course, passed the Democrat-dominated assembly’s education’s and appropriations committees to make it to the assembly floor.

This information that the news media refuses to acknowledge, was sent to us by Bob and Geri Boyd, hosts of the national radio program, Issues in Education. Readers, do join us by getting this out to the public including on your social media. Here it is:

On Friday, the Trump administration released their annual report to Congress on White House Office Personnel. It includes the name, status, salary and position title of all 377 White House employees.

The report also said that Trump decided not to take a dime of his salary; instead he donated it to an amazing cause! See below.

The report also showed that President Trump is far better at saving money than Obama was. The total annual White House salaries under Trump are 35.8 million vs. $40.9 million under Obama, a savings of $5.1 million.

Here are some other key findings:

There are 110 fewer employees on White House staff under Trump than under Obama at this point in their respective presidencies.

Nineteen fewer staffers are also dedicated to The First Lady of the United States (FLOTUS). Currently, there are only five staffers dedicated to Melania Trump vs. 24 staffers who served Michelle Obama (FY2009)

However, it’s what the report said Trump did with this salary that has everyone talking.

Instead of taking his salary, Trump donated all $400,000 to the Department of the Interior where it will be used for construction and repair needs at military cemeteries! AMAZING! It’s so great to have a President who loves our brave military men and women so much!

Oh, and where’s the media coverage of this? That’s right, they don’t cover anything decent that the President does…but we can change this. Every time the media publishes a falsehood about President Donald trump, let us FLOOD each outlet with our anger at their false news. And make phone calls use email and regular mail.

And let us really be militant when the fake news media does a story like this: A friend of someone stated that Trump is a mental case, which the phony news media makes a feature story about, spend a bit of time coming down HARD on the media who fans such garbage. Media, you are check-mated.

The Democrats try to block absolutely everything President Trump tries to do making it all but impossible for him to do the work he pledged to do, and was voted in to do. This must stop. Surely charges could be filed against Demoncrats for impeding the work of the American People who legally voted President Trump into office.

Our thanks to Bob and Geri Boyd for this info that you will not see elsewhere.

The money you spend at Starbucks is used by them to support Planned Parenthood.

Yes, that’s where some of that coffee money goes. Surely you remember that Starbucks signed a string of legal briefs for Same sex Marriage. They are NOT a company with American interests. Plus you can get better coffee elsewhere.

Here are more companies that use the profits they get from YOU to support Planned Parenthood. They have given matching gifts to that barbaric murder factory. Others who follow the footsteps of Starbucks include, Johnson & Johnson, Levi Strauss, Microsoft, Nike, Pepsi, Tostitos and more.

Donnie Moore whose ministry included a power team for evangelistic services and who was also the Chaplain of The Oakland A’s, passed away yesterday. We are still awaiting details. At one of his programs, our grandson, Brandon, received Jesus as his savior.

Chuck Missler, of  Koninonia House, passed away at age 83 in his home in Reporoa, New Zealand on May 1,2018. He was a first class Bible teacher & Scholar. This writer met him while filming, Ancient Secrets of The Bible where I was a writer, technical consultant and researcher. He was welcoming and friendly.